Guy built a Lamborghini in his basement 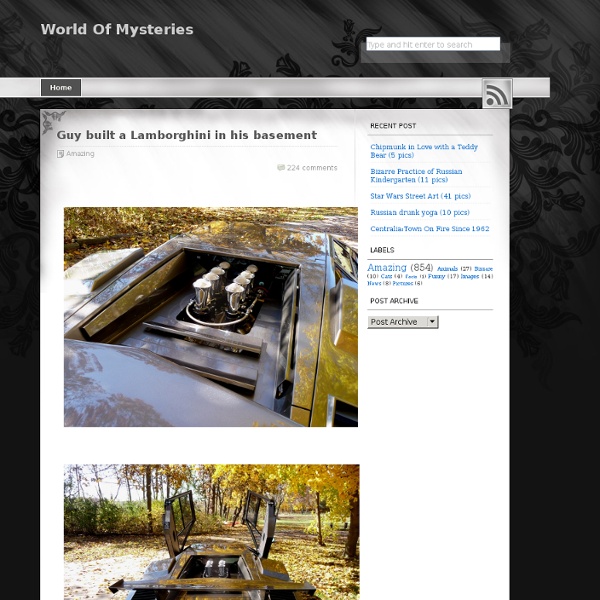 2009 Mansory Cyrus 2009 Mansory Cyrus Mansory has release the Cyrus package based on the Aston Martin DBS or the Aston Martin DB9. A coilover suspension provides the best road holding and emphasises the striking rims in XXL. The refinement is perfected by an exclusive interior programme. The Mansory Cyrus Aston Martin DBS or DB9 optimal road grip is provided by the 9×20 and 10,5×21 inch rims in combination with Dunlop Sport Maxx tyres measuring 255/30ZR20 at the front and 295/25ZR21 at the back. For more information about the exclusive MANSORY refining programme for the Aston Martin DBS or DB9, please visit the web site www.mansory.com Photo Credit: © Mansory Chromatic typewriter types works of art A typewriter that paints? Artist Tyree Callahan modified this 1937 Underwood Standard typewriter to do just that, replacing each key with a different hue that can paint on paper. A chromatic typewriter isn't by any means practical (the keys have to be manually reloaded with paint) - but the concept is still pretty interesting. View all So, how did he come up with the idea to create the typewriter, and once he had that idea how did he turn it into a reality? How did you come up with the idea for the typewriter? The idea for the Chromatic Typewriter came about one day in the studio as I was struggling along with a watercolor. How did you put the idea together? It took a few months to find this one [the typewriter]. The piece was intended to be purely conceptual, but I do have a confession: as I was applying paint to the keys I could not resist trying it out. The additional challenge, however, was the layout of colors. The colors were chosen from an HTML color palette chart available online.

Lamborghini Madura by Slavche Tanevski One Sharp Black Lambo From the darkest depths of the design mind of the one called Slavche Tanevski comes THIS! The Lamborghini *Ankonian. It’s black. And I don’t mean flashy in any kind of bad way. It’s not quite “green,” but it’s does have that sort of environmental friendliness in mind with it’s downsisedness. + Does this car look familiar to anyone? *NOTE from Chris Burns: originally I’d had this car marked “Madura”, when in fact it is called the Ankonian. Designer: Slavche Tanevski 10 Best Sexual Drinking Games Some of the best sexual drinking games can be done either in an intimate setting with only you and your girlfriend or you can make it a party and have multiple people. The ten most commonly played sexual drinking games are: Nine cans of beer or the floor. In this game you will need about nine cans of beer per person, (NOTE: not everyone will finish this game) a shot glass and a time keeper.