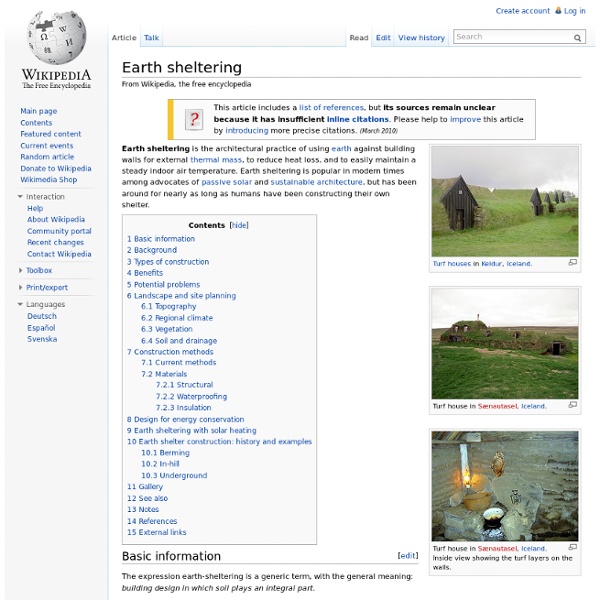 Earth sheltering is the architectural practice of using earth against building walls for external thermal mass, to reduce heat loss, and to easily maintain a steady indoor air temperature. Earth sheltering has become relatively more popular in modern times, especially among environmentalists and advocates of passive solar and sustainable architecture. However, the practice has been around for nearly as long as humans have been constructing their own shelters. Definition[edit] The expression earth-sheltering is a generic term, with the general meaning: building design in which soil plays an integral part. A building can be described as earth-sheltered if its external envelope is in contact with a thermally significant volume of soil or substrate (where “thermally significant” means making a functional contribution to the thermal effectiveness of the building in question.) There may be said to be three forms of earth-sheltered building: earth-coveredearth-bundedsubterranean Background[edit]

More Permanent Shelters - The Red Cedar Volunteer Resource Traditional Examples of Permanent Shelters There is a great deal that can be learned from the traditional building techniques of the past, a combination of what was available in the location applied to the conditions of the location over centuries produced structures uniquely suited to the land and history and culture that incorporated them. The Wikipedia Category: Vernacular Architecture Hebridean Black House The Hebridean House is a traditional house once common in Scotland and now only found where it originated in the Hebridean islands, although modern reinterpretations have cropped up after 1993. The main features of the Black House are a double stone wall, a tied down thatched roof and a lack of a chimney- making the interior walls black (hence the name).

Geothermal heat pump Ground source heating and cooling A geothermal heat pump or ground source heat pump (GSHP) is a central heating and/or cooling system that transfers heat to or from the ground. It uses the earth as a heat source (in the winter) or a heat sink (in the summer). This design takes advantage of the moderate temperatures in the ground to boost efficiency and reduce the operational costs of heating and cooling systems, and may be combined with solar heating to form a geosolar system with even greater efficiency.

home of earth Probably one of the first homes man lived in after he came out of a cave, was made of earth. To be sure, the earliest known kinds of earth construction were very crude by our standards today. Primitive man did little more than stick mud on poles woven closely together. Blackhouse (building) A blackhouse is a traditional type of thatched house in the Scottish Highlands. Black House or Blackhouse may also refer to: United Kingdom Blackhouse, Aberdeenshire, a place in Aberdeenshire United States

Earth house Lättenstrasse estate in Dietikon by Peter Vetsch another view of the same building Parking facility An earth house (also known as an earth berm or an earth sheltered home) is an architectural style characterized by the use of natural terrain to help form the walls of a house. An earth house is usually set partially into the ground and covered with thin growth.

Step-by-Step-Earthbag-Building This Instructable explains each main step of construction for building vertical earthbag walls. Videos on my Earthbag Natural Building YouTube channel demonstrate the process. For those who don’t know, earthbag building uses polypropylene rice bags or feed bags filled with soil or insulation that are stacked like masonry and tamped flat. Barbed wire between courses keeps bags from slipping and adds tensile strength.

A Low Impact Woodland Home The site before starting Hole dug and level, post positions marked out, dry stone foundation walls down, first retaining wall built against front bank. 30 or so small trees and a bit of chainsawing later. Blackhouses Blackhouses were so named not because of the fact that they were in the early days smoke filled and had small windows, but because they were compared to new houses being built in the late 1800's which were called 'white houses'. The new 'white houses' were designed to separate humans from their livestock and animals. The design of a blackhouse originates back several thousand years, as does the constructional method. The building consists of two concentric dry stone walls with a gap between them filled with earth or peat. The roof was either thatched or made up of turfs and constructed upon a wooden frame.

diymortor For high quality oven, refractory mortar should be used in only up to ¼" (6mm) thick application. Mortar only assists in forming firing chamber and shouldn't be used or exposed on the inside hot-face. Refractory mortar should not be used to plug holes or big spaces between firebricks. See My Cob House at Dancing Rabbit Ecovillage Open House - The Year of Mud: Cob House & Natural Building Dancing Rabbit Ecovillage‘s annual Open House is coming soon, and on that date you’ll be able to tour Gobcobatron, my cob house. Saturday, September 24, 2011 1:00- 4:00 p.m. Location: Rutledge, Missouri This is your chance to enjoy free tours, get a peek inside several natural

cob SAND Course concrete sand and small stones serve as the aggregate in cob, similar to aggregate in concrete. The sand provides strength and shrinkage control. Maximizing the sand proportion in the cob mixture results in the strongest possible wall. STRAW The long pieces of straw also help to knit together each successive addition of wet cob to the wall. Straw provides tensile strength for any pulling forces inside the cob wall, which provides additional resistance to cracking. CLAY Clay is the key ingredient that binds the sand and straw into a monolithic wall system. Tiny Earthbag Homes Constructing an earthbag home is considered by many to be the most inexpensive method of building a home simply because the material is free and usually already onsite. The major cost associated with earthbag homes are the bags used to hold the earth which makes up the structure. The most common type of bags used are solid-weave polypropylene. These bags typically hold rice and grain during shipment and can be reused for building an earthbag home.

On Being Buried Alive (Not like that!) -From Wikipedia, the free encyclopedia "An earth lodge is a semi-subterranean building covered partially or completely with earth, best known from the Native American cultures of the Great Plains and Eastern Woodlands. Most earth lodges are circular in construction with a dome-like roof, often with a central or slightly-offset smoke hole at the apex of the dome.[1] Earth lodges are well-known from the more-sedentary tribes of the Plains such as the Hidatsa, Mandan, and Arikara, but they have also been identified archaeologically among sites of the Mississippian culture in the Eastern United States." Plains Indians of the United States did this, as did tribes of the Mississippi, and the British Columbian Interior region. Germanic tribes and Scottish and Hebridean peoples used the Black House which was a similar double stone walled design.