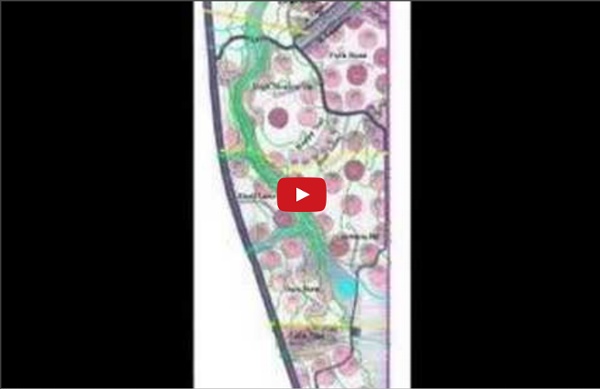 Earthships - Trombe wall Passive solar design using an unvented Trombe wall and summer shading A Trombe wall is a passive solar building technique where a wall is built on the winter sun side of a building with a glass external layer and a high heat capacity internal layer separated by a layer of air. Heat in close to UV spectrum passes through the glass almost unhindered then is absorbed by the wall that then re-radiates in the far infrared spectrum which does not pass back through the glass easily, hence heating the inside of the building. Trombe walls are commonly used to absorb heat during sunlit hours of winter then slowly release the heat over night. Trombe walls work on the basic greenhouse principle that heat from the sun in the form of near-visible shorter-wavelength higher-energy ultraviolet radiation passes through glass largely unimpeded. Basic design[edit] A Northern hemisphere Trombe wall Air flow in a vented Trombe wall (Model by D. Trombe walls may be constructed with or without internal vents.

Earthship Earthships - Rammed earth A typical Hmong house-building technique in the tropical climate of Vietnam Overview of use[edit] Model showing construction of rammed-earth wall on foundation The construction of an entire wall begins with a temporary frame (formwork), usually made of wood or plywood, to act as a mould for the desired shape and dimensions of each wall section. Once a wall is complete, it is strong enough for the frames to be immediately removed. Where blocks made of rammed earth are used, they are generally stacked like regular blocks but are bonded together with a thin mud slurry instead of cement. Characteristics[edit] Surface detail of a rammed-earth wall: apart from the patches of damage, the surface shows regular horizontal lines from the wooden formwork used in constructing the wall and subtler horizontal strata from successive layers of compacted earth. The compressive strength of rammed earth can be up to 4.3 MPa (620 psi). Environmental aspects and sustainability[edit] History[edit] The U.S.

Earthships - Design Build Bluff DesignBuildBLUFF is a non-profit organization based in Park City, Utah that designs and builds sustainable housing, and is noted for its award-winning and innovative home designs.[1] It is named after Bluff, Utah where their campus facility is located and because of Bluff's close proximity to the Navajo Nation. Each year, graduate-level architecture students from the University of Utah College of Architecture and Planning, and more recently, The University of Colorado Denver, design and build a home for a member of the Navajo Nation, at no charge to the home recipient. The homes are built with sustainable architecture techniques and feature locally produced construction materials. The program is currently expanding to other universities in The Four Corners region.[2][3][4][5][6][7] History[edit] DesignBuildBLUFF was founded in 2000 by University of Utah Professor, Hank Louis. Design and construction[edit] Projects[edit] Gallery[edit] References[edit] External links[edit]

Accueil - La serre du futurLa serre du futur | Ici et maintenant ! Earthships - Desulfation The lead–acid battery was invented in 1859 by French physicist Gaston Planté and is the oldest type of rechargeable battery. Despite having a very low energy-to-weight ratio and a low energy-to-volume ratio, its ability to supply high surge currents means that the cells have a relatively large power-to-weight ratio. These features, along with their low cost, makes it attractive for use in motor vehicles to provide the high current required by automobile starter motors. As they are inexpensive compared to newer technologies, lead-acid batteries are widely used even when surge current is not important and other designs could provide higher energy densities. Lead-acid battery sales account for 40–45% of the value from batteries sold worldwide (1999, not including China and Russia), a manufacturing market value of about US$15 billion.[7] History[edit] Electrochemistry[edit] Discharge[edit] Fully discharged: two identical lead sulfate plates Negative plate reaction: Positive plate reaction:

Earthships - Lithium-ion battery Lithium-ion batteries are common in consumer electronics. They are one of the most popular types of rechargeable battery for portable electronics, with one of the best energy densities, no memory effect (note, however, that new studies have shown signs of memory effect in lithium-ion batteries[6]), and only a slow loss of charge when not in use. Beyond consumer electronics, LIBs are also growing in popularity for military, electric vehicle and aerospace applications.[7] For example, Lithium-ion batteries are becoming a common replacement for the lead acid batteries that have been used historically for golf carts and utility vehicles. Instead of heavy lead plates and acid electrolyte, the trend is to use a lightweight lithium/carbon negative electrodes and lithium iron phosphate positive electrodes. Lithium-ion batteries can provide the same voltage as lead-acid batteries, so no modification to the vehicle's drive system is required.[8] History[edit] Before commercial introduction[edit]

Earthships - Lithium iron phosphate battery The lithium iron phosphate (LiFePO 4) battery, also called LFP battery (with "LFP" standing for "lithium ferrophosphate"), is a type of rechargeable battery, specifically a lithium-ion battery, which uses LiFePO 4 as a cathode material. LiFePO 4 batteries have somewhat lower energy density than the more common LiCoO 2 design found in consumer electronics, but offers longer lifetimes, better power density (the rate that energy can be drawn from them) and are inherently safer. LiFePO 4 is finding a number of roles in vehicle use and backup power. History[edit] LiFePO 4 is a natural mineral of the olivine family. MIT has introduced a new coating that allows the ions to move more easily within the battery. Advantages and disadvantages[edit] The LiFePO 4 battery uses a lithium-ion-derived chemistry and shares many advantages and disadvantages with other Lithium-ion battery chemistries. LFP chemistry offers a longer cycle life than other lithium-ion approaches.[7] Safety[edit] Usage[edit]

Earthships - Septic drain field Septic drain fields, also called leach fields or leach drains are used to remove contaminants and impurities from the liquid that emerges from the septic tank. A septic tank, the septic drain field, and the associated piping compose a complete septic system. The septic drain field is effective for disposal of organic materials readily catabolized by a microbial ecosystem. The drain field typically consists of an arrangement of trenches containing perforated pipes and porous material (often gravel) covered by a layer of soil to prevent animals and surface runoff from reaching the wastewater distributed within those trenches.[1] Primary design considerations are hydraulic for the volume of wastewater requiring disposal and catabolic for the long-term biochemical oxygen demand of that wastewater. Hydraulic design[edit] Cross-section of weeping tile and leach field Wastewater from toilets is assumed to contain bacteria and viruses capable of causing disease. Catabolic design[edit] Notes[edit]

Earthships - Concentrated solar power Concentrated solar power (also called concentrating solar power, concentrated solar thermal, and CSP) systems use mirrors or lenses to concentrate a large area of sunlight, or solar thermal energy, onto a small area. Electrical power is produced when the concentrated light is converted to heat, which drives a heat engine (usually a steam turbine) connected to an electrical power generator or powers a thermochemical reaction (experimental as of 2013).[1][2][3] CSP is being widely commercialized and the CSP market has seen about 740 MW of generating capacity added between 2007 and the end of 2010. More than half of this (about 478 MW) was installed during 2010, bringing the global total to 1095 MW. CSP growth is expected to continue at a fast pace. As of January 2014, Spain had a total capacity of 2,204 MW making this country the world leader in CSP. CSP is not to be confused with concentrated photovoltaics (CPV). History[edit] Current technology[edit] Parabolic trough[edit] Source:[25][26]