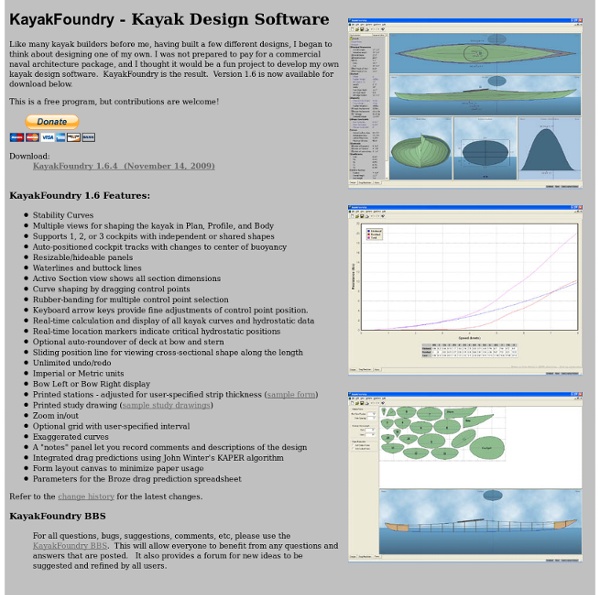 Like many kayak builders before me, having built a few different designs, I began to think about designing one of my own. I was not prepared to pay for a commercial naval architecture package, and I thought it would be a fun project to develop my own kayak design software. KayakFoundry is the result. Version 1.6 is now available for download below. This is a free program, but contributions are welcome! Download: KayakFoundry 1.6.4 (November 14, 2009) KayakFoundry 1.6 Features: Stability Curves Multiple views for shaping the kayak in Plan, Profile, and Body Supports 1, 2, or 3 cockpits with independent or shared shapes Auto-positioned cockpit tracks with changes to center of buoyancy Resizable/hideable panels Waterlines and buttock lines Active Section view shows all section dimensions Curve shaping by dragging control points Rubber-banding for multiple control point selection Keyboard arrow keys provide fine adjustments of control point position. KayakFoundry BBS

Bill Thomas Woodworking Order Page We honor all major credit cards, personal checks and overseas money orders payable in US funds. For orders outside the continental United States, custom epoxy orders and kit orders please email for an exact shipping quote. bill@billthomaswoodworking.com Thank you. Please note the shipping cost for plans going to Canada is 24 dollars. You can place your order on this page and I’ll send an additional invoice to you for $16 or you or you can email me and I’ll send an invoice for the total cost of the plans with shipping. Place an Order If you have any questions about our boats, kits, building supplies or classes, or if you would like to discuss a custom woodworking project please touch base. I look forward to hearing from you. Bill Thomas Phone us: 207-676-4049 Email us: bill@billthomaswoodworking.com Mail: print our order form(PDF)

Memories of Moosewood and Enchanted Broccoli Forest Soup | madame scientist's not-so-mad musings When I arrived in the US at age 21, more years ago than all the digits on your hands and feet, I was in for a culinary disappointment, if not a culture shock. Indeed, the shock was on the other foot, if weak puns are permitted. My new American friends not only had to deal with my innocent observation that all Caucasians look alike (have you ever been to upstate New York?), they had to struggle with misconceptions of my life in an adobe hut instead of a high rise apartment (like Columbus, they got the continent and the Indian wrong, again). Back in the day, vegetarians were a rare and suspect breed, evident from the exclusively carnivorous offerings on every menu. I quickly tired of grilled cheese sandwiches and Dannon fruit-on-the-bottom yogurt. In the midst of this culinary calamity, my housemate Catherine- a lovely British-American transplant- gave me the Moosewood cookbook. Moosewood Memories Broccoli soup for comfort and sustenance Veggies for cream of broccoli soup Simmered in broth

the story | The HemLoft I'd be remiss in beginning this tale without first mentioning my dad. Throughout my childhood he provided me with a steadfast example of ingenuity, self-belief, and incredible will power. I could never have accomplished any of this without him... Chapter 1: A Retirement Gone Sideways I'm just going to come out and say it. Chapter 2: My Foray into Carpentry In the Spring of 2008, my mission to retire was rudely interrupted by reality. Chapter 3: The Idea: An Egg in a Tree So there I was, a bourgeoning carpenter, living out of my car, and heading off in an exciting new direction. Chapter 4: Finding the Perfect Tree By the time I started looking for a site, I had determined that it should be hidden somewhere in the backwoods. Chapter 5: Raising the Structure By the fall of 2008, my lengthy search for the perfect tree was over, and I was ready to start building. Chapter 6: Slovenia, Olympics, and Falling in Love Sometimes life veers off in directions that you’re not expecting.

Growing Grapes for Home Use Extension > Garden > Yard and Garden > Fruit > Growing grapes for home use Emily S. Tepe and Emily E. Hoover About grapes Grapes are woody perennial vines. Do you want to grow grapes primarily to cover an arbor? Being familiar with the various parts of a grapevine will help when it comes to growing and pruning. There are now many excellent cold-hardy wine grape cultivars available for commercial and hobby winemakers in Northern climates. Helpful hints Full sun is important to provide the heat required to ripen the fruit. Bluebell is a winter hardy table grape, reminiscent of Concord. Cultivars These cultivars can be enjoyed fresh from the vine, used for juice and jelly, and some for making wine. If you're interested in more extensive information about all these varieties, you can find this as well as a current list of nurseries at the Minnesota Grape Growers website. Getting started Preparation When planting bare root vines, soak roots in a bucket of water for 3-4 hours before planting. Support

The DIY (or, if you must, "Ghetto") UPS You know what an uninterruptible power supply looks like, right? It's a heavy beige box with an IEC power socket on one end, one or more three-pin sockets on the other, a few lights and buttons. Well, it can be. Or it can look like this. This contraption works in basically the same way as a normal "dual conversion" UPS. The inverter converts the low voltage DC back to AC power, with an efficiency of more than 85% - 100 watts of DC in, about 90 watts of AC out. Many off-the-shelf UPSes can only provide power for a few minutes - long enough to save your work and shut down. With a Franken-UPS like this one, though, you can have as much battery backup as you can fit in your computer room. A dual conversion UPS like this runs the inverter all the time. There are also "line interactive" UPSes, which run the inverter all the time, though not at anything like full capacity; they also pass mains power through, while it's available. It does let you see what's inside a normal single-box UPS, though.

ICD/ITKE Research Pavilion at the University of Stuttgart Polygonal timber plates give this pavilion at the University of Stuttgart a skeleton like a sea urchin's. Top and above: photographs are by Roland Halbe The pavilion was constructed for a biological research collaboration between the Institute for Computational Design (ICD) and the Institute of Building Structures and Structural Design (ITKE), who also invited university students to take part. Above: photograph is by Roland Halbe Plywood sheets just 6.5mm thick were necessary to create the domed structure, which is fastened to the ground to prevent it blowing away. The exterior plywood panels are slotted together using finger joints, in the same way as minute protrusions of a sea urchin’s shell plates notch into one another. Photography is by ICD/ITKE, apart from where otherwise stated. Here's a more technical description from the researchers: Following the analysis of the sand dollar, the morphology of its plate structure was integrated in the design of a pavilion.

Reducing the Cost of IP Law - Stephan Kinsella US Patent Issued in 1982 As I noted in Part 1, there is a growing clamor for reform of patent (and copyright) law, due to the increasingly obvious injustices resulting from these intellectual property (IP) laws.[1] However, the various recent proposals for reform merely tinker with details and leave the essential features of the patent system intact. Patent scope, terms, and penalties would still be essentially the same. How should the IP system be reformed? For those with a principled, libertarian view of property rights, it is obvious that patent and copyright laws are unjust and should be completely abolished.[2] Total abolition is, however, exceedingly unlikely at present. Further, most people favor IP for less principled, utilitarian reasons. What is striking is that this myth is widely believed even though the IP proponents can adduce no evidence in favor of this hypothesis. Costs and Benefits of IP Law But benefits are not enough. The costs of the patent system are widespread.

'What Idiot Wrote The Patent That Might Invalidate Software Patents? Oh, Wait, That Was Me' We recently wrote about a surprising Federal Circuit (CAFC) ruling that might open the door to invalidating a lot of software patents. We received an an interesting comment on the post a few days later from John Pettitt: So I was thinking - great they invalidated software patents, lets see what crappy patent written by an idiot they picked to do it - then I realized the idiot in question was me :-) Not sure how I feel about this. John - inventor of the patent in question. Pettitt is now running an interesting operation called Free Range Content, which helps companies syndicate content easily. Given his comment, calling it "great" that software patents could be invalidated, we wanted to know if he was completely against software patents. It's a complex issue. This is a good point and one we've raised many times before. Given that this was his patent, we wondered if his views towards patents had changed over time, and he noted, not really: It hasn't change much.

How to make raspberry-red currant mead « Northern Vista — Thoughts from the Northcountry August 16, 2010 Every year I make at least five gallons of red currant-raspberry mead (technically, it’s called red currant-raspberry melomel, but whatever). Anyhow, I thought I would share my recipe and my process. The recipe (for five-six gallons): Ten pounds of red currants Ten pounds of currantsFive pounds of raspberriesFifteen pounds of honeyYeast nutrientPectin enzymeBordeaux yeast Supplies: Though you don’t need absolutely everything on this list, I consider the following things critical when I make my mead. 1 seven gallon primary fermenter (plastic bucket)1 six gallon carboyLarge nylon straining bagFood processorKitchen ScaleSome sort of sterilization solution (I usually use the iodine-based stuff from the brew shop)Siphon hoseAir lockFive gallon stainless steel pot Most of the supplies you will need. The Process: 1. 2. 3. 4. 5. 6. 7. 8. 9. 10.

Basic Mead Brewing, a Recipe for Brewing Basic Recipes Despite what most people think, mead is not a kind of beer, as the definition of a beer is an alcoholic beverage made from grains. In Europe beers were made from barley and wheat. In Japan beer is made from rice (this beer is called Sake) and for the ancients of Mesoamerica beer was made from Maize (Corn). Mead is made from water, honey and yeast; as such it is not a beer. Neither is it a 'wine' as the sugars involved in fermentation are not derived from fruit. Mead is mead, an ancient drink much beloved of the Celts and the peoples of Europe during the Middle Ages. To a purist, however, the various forms of products that are called 'Mead' can be broken down into the following list: Mead and its Derivatives Mead Honey 'wine' made without the addition of any spices or fruit. Metheglin Honey 'wine' made with spices. Melomel Honey 'wine' made with fruit; of which there are two main types: Pyment Honey 'wine' with grapes Cyser Honey 'wine' with apple juice: Sack Mead Very sweet honey 'wine'. Method