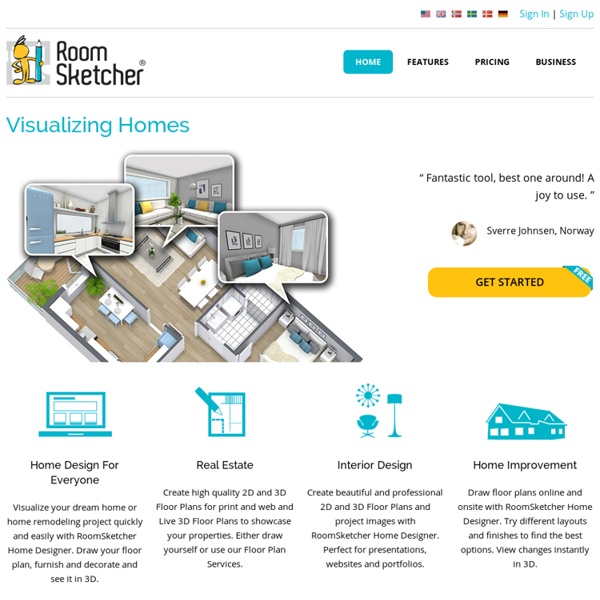 Time to Build - The Coolest Floating House SAN FRANCISCO — Sarah and Kimo Bertram never imagined living in a floating house. But nearly three years ago, after being outbid on more conventional homes, Ms. Bertram spotted an ad on Craigslist offering a furnished houseboat for rent. On a lark, they checked it out. Most surprising was the location: not Sausalito, the Bay Area’s celebrated houseboat community, but Mission Creek, an obscure backwater canal once surrounded by acres of tidal shoals, and later industrial zones. Unreal Development Kit What is UDK? The Unreal Development Kit is the free edition of Unreal Engine 3 that provides access to the award-winning 3D game engine and professional toolset used in blockbuster video game development, architectural visualization, mobile game development, 3D rendering, digital films and more. Who is it for? Unreal Engine technology is used by game developers, researchers, television studios, machinima directors, artists and students. If you have an idea that needs to be brought to life in a game engine, you might consider UDK. Using UDK you can deploy games and applications to PC, iOS and Mac.

One secret about online accounts every computer user needs to know Do you remember every online account you've ever made? Most people create dozens of accounts that they have only used once. Just think of how many times you've created a user name and password just to read an article, play a game or download something. Favorite Architectural Cutout and Texture Resources Architecture visualization can consume a lot of resources and time if you’re not careful. With the tediousness of Photoshop and renderings calculating through the night, spending more that 20 minutes searching Google images for a specific texture or image can become a breaking point for many. Any way to save time in this field is a big advantage, especially in school.

Time to Build - Roof Garden House The two-bar house hugs the front and side property lines of the deep lot, providing private, usable space in the side and rear yards. Photo: Joe Fletcher The landscape often is an afterthought, fleshed out with leftover funds. About An overview of Kodu. (Click to play) Kodu lets kids create games on the PC and Xbox via a simple visual programming language. Kodu can be used to teach creativity, problem solving, storytelling, as well as programming. 1990 The Way It Was. World Wide Web/Internet protocol (HTTP) and WWW language (HTML) created by Tim Berners-Lee. President Bush signs the Clean Air Act, mandating a variety of pollution-reducing changes in the automobile and fuel industries. The Simpsons debuts on Fox and becomes an instant hit. I've fallen and I can't get up" - Mrs.

7 (More) Websites to Help Us Be Better Architects 7 (More) Websites to Help Us Be Better Architects Last year we published a list of 22 websites meant to make an architect's job a little bit easier. From selecting the perfect color scheme to tracking the price of your next big purchase, solving technical problems or simply trying to balance your sleep and caffeine intake, the list sought to offer solutions to a diversity of issues – with something (hopefully) for everyone. This year we offer an addendum with seven additional sites meant to further allay the ever-stressful life of architects.

Time to Build - Vacation Homes Living, dining, and cooking (under the stair) in this cabin's soaring main room create a vacation vibe. A vacation home is all about getting away -- from housework as well as office work. Of course it should be in a refreshing location, but also it should offer a change of pace in the way you live -- be easier to maintain, be more casual, and allow for being outside as much as possible. (This is assuming you're not planning to build where the weather is extreme...) Here are some vacation home designs to get you thinking about what you would build. Open and light-filled.

LAB! - CSS 3D Earth CSS 3D Earth Using CSS 3d to create an earth with shading and layers. It is not as good as using WebGL but it theoretically works on iPad. I used PerspectiveTransform.js in this experiment. Make Ringtones - How to Make Ringtones For Your Cell Phone Video If you want a unique, easy-to-identify ringer for your cell phone, try making your own ringtone. Making ringtones for a cell phone is easy using free editing software and your favorite song.See Transcript Hey there, Zack Heene here for About.com. I am going to show you how to make your own ringtone for your cell phone.

5 Places to Download Free, Ethnically Diverse Render People 5 Places to Download Free, Ethnically Diverse Render People The significance of people in architectural rendering is nothing new – the added realism, and addition of narrative elements can make or break whether a render successfully sells its project. With sites like Skalgubbar, architects and architecture students have easier access than ever before to “Render People”: PNG cut-outs of people, ready to be photoshopped into buildings. In the early years of free, online render-people databases, there was a stark homogeneity to the people represented. As the people providing the crowdsourced images were from predominantly Caucasian, Scandinavian countries, there was a surge of such people appearing in renders in projects across the world. In wake of this, other groups have worked to produce workable databases of diverse, culturally representative render people, giving architects and architecture students the freedom to accurately depict their work in its intended context.