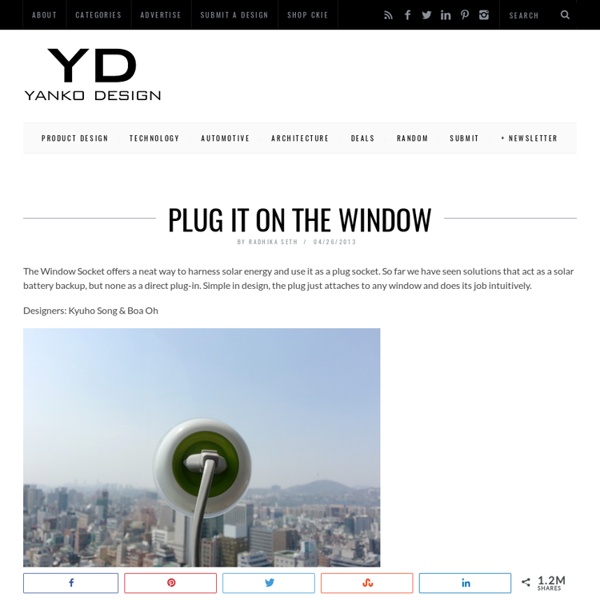 The Window Socket offers a neat way to harness solar energy and use it as a plug socket. So far we have seen solutions that act as a solar battery backup, but none as a direct plug-in. Simple in design, the plug just attaches to any window and does its job intuitively. Designers: Kyuho Song & Boa Oh

StreetGodz- Body Enhancing Shoe by Raphael Edwards — Kickstarter StreetGodz- Body Enhancing Shoe by Raphael Edwards — Kickstarter. StreetGodz is a company that was created not only for the elite athlete but the every day man and woman. StreetGodz makes high quality sneakers and apparel for affordable prices. Our main goal is to empower our youth and give back to the community. In taking steps towards achieving our goal we have created a shoe that helps the human body. We have utilized a technology that has been studied for years and placed it in our shoes. Careers - Find Solar Jobs x close You are now being transferred to our secure Solar Bonds website. In compliance with regulatory requirements, our Solar Bonds website is seperate from SolarCity's main website. Information on SolarCity's website is not part of, incorporated into, or otherwise included in either our Solar Bonds website or any prospectus related to our Solar Bonds securities offerings. You should only rely on the information available on our Solar Bonds investment website when making any investment decision with respect to Solar Bonds.

31 Incredible Rooms That You'll Wish You Had You may think that decorating a room is easy but creating the perfect room isn’t. There’s many elements to consider whether it be the right chair, carpet, chandelier, etc. Each of the following room is perfect but totally different from one and another. All the combinations of things just work together and make the space look alive. I guarantee you that you’ll fall in love with at least one of these rooms.

10 Modern Devices That Will Change Our Lives Many believe that we are now experiencing the most intense technological revolution of all time, and that we are transitioning into a High Technology Age, where new advancements will make previous models extinct. Here are some gadgets that are slated to be released in the very near future (some have been released already). Many of these modern devices will change our lives—and the world we live in—for good: Fear of the dentist can be a very serious issue for many children and adolescents. According to academic researches into Dental Fear and Anxiety, some young people hate dentist visits so much that they often refuse to co-operate, or worse—they don’t even go to the dentist. The truth is that no one really enjoys going to the dentist regardless of their age, even if it’s just for a plain check-up.

Patent US20040164824 - Hyperspace energy generator - Google Patenten [0072] 1. Referring to FIG. 15, the coaxial cable has a braided gold wire outer conductor (A) and a braided gold wire inner conductor (B) separated by a dielectric (C). The open braiding promotes the conduction of the electromagnetic wave while allowing the hyperspace mist to seep out of the braid and permeate the surrounding material in which it is embedded. The Chromatic Typewriter Washington-based painter Tyree Callahan modified a 1937 Underwood Standard typewriter, replacing the letters and keys with color pads and hued labels to create a functional “painting” device called the Chromatic Typewriter. Callahan submitted the beautiful typewriter as part of the 2012 West Prize competition, an annual art prize that’s determined by popular vote. I don’t know how practical painting an image with a color typewriter is, but if Keira Rathbone can do it… (via dark silence in suburbia)

Shifts Happen: Turbines and Transistors - capradio.org California Institute of Technology professor John Dabiri is trying to replace the trend towards fewer, larger wind turbines - many now dwarfing the Statue of Liberty - by developing (and organizing) thousands of smaller and far cheaper turbines. This is interesting for two reasons. First, because the idea has technical promise. Larger wind turbines interfere with one another, reducing their efficiency and increasing the wear and tear on their massive blades. Installation and maintenance are costly, they're noisy, and a danger to birds. Dabiri's idea is to replace these individual behemoths with many small vertical-axis wind turbines and, more specifically, to arrange them in such a way that each turbine boosts, rather than interferes with, the power output of those around it.

12 Ingeniously Designed Tables Ever Made On This Planet. Just Superb! Every furniture will always attract you because of the creativity, design, innovation and unique style. Some experts have created world’s most amazing tables as you will see in this post below. You may have see many table designs already but these brilliant tables are just out of this world. Every part has the attraction, everything is selected as per requirements like material, paint, wood, design, dimensions and finishing. Star Wars-style robotic arm approved for mass production Published time: May 10, 2014 08:55 Edited time: May 12, 2014 22:00 Image from darpa.mil A “near-natural” prosthetic arm, that took eight years to develop and test, has been approved for mass production by the US Food and Drug Administration. The DEKA Arm System has been affectionately dubbed “The Luke,” after Star Wars’ Luke Skywalker who received a robotic replacement for the hand he lost in a fight with Darth Vader in the 1980 film “The Empire Strikes Back.”

Fuel cell - Wikipedia, the free encyclopedia Demonstration model of a direct-methanol fuel cell. The actual fuel cell stack is the layered cube shape in the center of the image Scheme of a proton-conducting fuel cell The first fuel cells were invented in 1838. The first commercial use of fuel cells came more than a century later in NASA space programs to generate power for probes, satellites and space capsules. Since then, fuel cells have been used in many other applications.