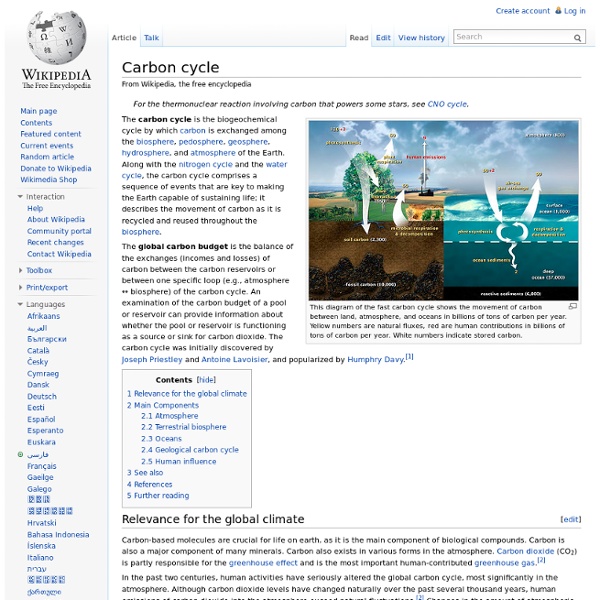 This diagram of the fast carbon cycle shows the movement of carbon between land, atmosphere, and oceans in billions of tons of carbon per year. Yellow numbers are natural fluxes, red are human contributions in billions of tons of carbon per year. White numbers indicate stored carbon. The carbon cycle is the biogeochemical cycle by which carbon is exchanged among the biosphere, pedosphere, geosphere, hydrosphere, and atmosphere of the Earth. Along with the nitrogen cycle and the water cycle, the carbon cycle comprises a sequence of events that are key to making the Earth capable of sustaining life; it describes the movement of carbon as it is recycled and reused throughout the biosphere. The global carbon budget is the balance of the exchanges (incomes and losses) of carbon between the carbon reservoirs or between one specific loop (e.g., atmosphere ↔ biosphere) of the carbon cycle. Relevance for the global climate[edit] Main components[edit] Atmosphere[edit] Terrestrial biosphere[edit]

Global Warming Frequently Asked Questions IntroductionGreen House EffectGreen House GasesGlobal TemperaturesEl NiñoOcean Heat ContentSea Level RiseHydrological CycleCryosphereClimate Variability and ExtremesHistorical ContextNatural VariabilityU.S. ClimateFuture Climate ProjectionsAdditional Resources Introduction This page is based on a brief synopsis of the 2007 Fourth Assessment Report (AR4) by the Intergovernmental Panel on Climate Change (IPCC), as well as NCDC's own data resources. It was prepared by David Easterling and Tom Karl, National Climatic Data Center, Asheville, N.C. 28801. One of the most vigorously debated topics on Earth is the issue of climate change, and the National Environmental Satellite, Data, and Information Service (NESDIS) data centers are central to answering some of the most pressing global change questions that remain unresolved. Listed below is information based upon common questions addressed to climate scientists (based on IPCC reports and other research) in common, understandable language.

Carbon dioxide in Earth's atmosphere Carbon dioxide is essential to life on Earth and is an integral part of the carbon cycle which interacts with the Earth's oceans, soil, rocks and biosphere. Biologically, plants and other photoautotrophs extract the carbon from the atmosphere through the process of photosynthesis and use it as an energy source and for the construction of their body parts. Therefore, Earth wouldn't have a present-day biosphere without atmospheric CO2. Carbon dioxide is well mixed in the Earth's atmosphere and reconstructions show that concentrations of CO2 in the atmosphere varied from as high as 7,000 parts per million during the Cambrian period about 500 million years ago in ancient-Earth biospheres to as low as 180 parts per million during the Quaternary glaciation of the last two million years. The recent phenomenon of global warming has been attributed primarily to increasing atmospheric CO2 concentrations in Earth's atmosphere. Current concentration[edit] Past concentration[edit]

Emissions trading A coal power plant in Germany. Due to emissions trading, coal may become a less competitive fuel than other options. Emissions trading or cap and trade is a market-based approach used to control pollution by providing economic incentives for achieving reductions in the emissions of pollutants.[1] A central authority (usually a governmental body) sets a limit or cap on the amount of a pollutant that may be emitted. The transfer of permits is referred to as a trade. There are active trading programs in several air pollutants. Pollution as an externality[edit] By definition, an externality is an activity of one entity that affects the welfare of another entity in a way that is outside the market mechanism.[5] Pollution is the prime example most economists think of when discussing externalities. Overview[edit] Definitions[edit] The economics literature provides the following definitions of cap and trade emissions trading schemes. Market-based and least-cost[edit] Emission markets[edit]

Science Systematic enterprise that builds and organizes knowledge The Universe represented as multiple disk-shaped slices across time, which passes from left to right Modern science is typically divided into three major branches that consist of the natural sciences (e.g., biology, chemistry, and physics), which study nature in the broadest sense; the social sciences (e.g., economics, psychology, and sociology), which study individuals and societies; and the formal sciences (e.g., logic, mathematics, and theoretical computer science), which study abstract concepts. There is disagreement,[19][20][21] however, on whether the formal sciences actually constitute a science as they do not rely on empirical evidence.[22][20] Disciplines that use existing scientific knowledge for practical purposes, such as engineering and medicine, are described as applied sciences.[23][24][25][26] History Early cultures Classical antiquity In classical antiquity, there is no real ancient analog of a modern scientist. Notes

Frequently asked questions — ZeroCO2 - About Carbon Capture and Storage What is CCS? How is CO2 captured? How is CO2 transported? How is CO2 stored? I've heard CO2 can be stored in water too. Why do we need CCS? Is CCS safe? How do we know that it won't leak? But what if there is a leak? Can CO2 storage sites explode? But what about blow-outs? Can CCS remove all CO2? What does it cost? Will energy prices rise? Is there enough room to store it all? Isn't it better to just stop using fossil fuels? Isn't CCS just leaving our problems for future generations to look after? What is CCS? CCS is short for carbon capture and storage. How is CO2 captured? There are several different technologies available for capturing CO2 from industrial flues. How is CO2 transported? The preferred way of transporting CO2 is by pipeline. How is CO2 stored? There are several types of storage sites available that are well suited for CO2 storage. I've heard CO2 can be stored in water too. Yes it is possible, but we don't think it's a good idea. Why do we need CCS? Is CCS safe? In short: yes. No. No.

COP17 | CMP7 - About COP17/CMP7 - UN Convention on Climate Change (UNFCCC) In 1992, the United Nations Framework Convention on Climate Change (UNFCCC) sets an overall framework for intergovernmental efforts to address climate change. It is called a framework convention because it is seen as a starting point of addressing the problem of climate change. The Convention entered into force on 21 March 1994. The ultimate objective of the Convention is “to stabilise greenhouse gas concentrations at a level that will prevent dangerous human interference with the climate system”. gather and share information on greenhouse gas emissions, national policies and best practices; launch national strategies for addressing greenhouse gas emissions and adapting to expected impacts, including the provision of financial and technological support to developing countries; and cooperate in preparing for adaptation to the impacts of climate change. For more information:www.unfccc.int

History of climate change science The history of the scientific discovery of climate change began in the early 19th century when ice ages and other natural changes in paleoclimate were first suspected and the natural greenhouse effect first identified. In the late 19th century, scientists first argued that human emissions of greenhouse gases could change the climate. Many other theories of climate change were advanced, involving forces from volcanism to solar variation. In the 1960s, the warming effect of carbon dioxide gas became increasingly convincing, although some scientists also pointed out that human activities, in the form of atmospheric aerosols (e.g., "pollution"), could have cooling effects as well. During the 1970s, scientific opinion increasingly favored the warming viewpoint. Regional changes, antiquity through 19th century[edit] From ancient times, people suspected that the climate of a region could change over the course of centuries. Paleoclimate change and theories of its causes, 19th century[edit]

How the Carbon Dioxide Budget Trading Program Works Skip to main navigation Reducing CO2 Emissions Establishing and lowering emissions caps. RGGI participating states agreed upon a cap (regional CO2 emissions budget) amounting to approximately 188 million tons of CO2. That number is the total amount of CO2 that power plants in the region were expected to emit in 2009. Beginning in 2015, this cap will be reduced by 2.5 percent each year, for a total reduction of 10 percent by 2019. Supporting Clean Energy Establishing and distributing allowances. Marketing the allowances. Supporting low-carbon solutions. Using Offsets. How the CO2 Budget Trading Program and CO2 Allowance Auction Program Will Be Carried Out in New York New York will cap CO2 emissions at approximately 64 million tons through 2014, before reducing them over the subsequent four years. DEC's Role. NYSERDA's Role.

The 1847 lecture that predicted human-induced climate change | Leo Hickman | Environment When we think of the birth of the conservation movement in the 19th century, the names that usually spring to mind are the likes of John Muir and Henry David Thoreau, men who wrote about the need to protect wilderness areas in an age when the notion of mankind's "manifest destiny" was all the rage. But a far less remembered American - a contemporary of Muir and Thoreau - can claim to be the person who first publicised the now largely unchallenged idea that humans can negatively influence the environment that supports them. George Perkins Marsh (1801-1882) certainly had a varied career. Here's how Clark University in Massachusetts, which has named an institute in his memory, describes him: Throughout his 80 years Marsh had many careers as a lawyer (though, by his own words, "an indifferent practitioner"), newspaper editor, sheep farmer, mill owner, lecturer, politician and diplomat. In other words, he kept himself busy.

Carbon capture and storage could also impact air pollution "Carbon capture and storage can bridge the gap for the next few decades, cutting emissions until we can shift to a low carbon economy", Professor Jacqueline McGlade EEA Executive Director said. "Our report shows that while CCS may have an overall positive effect on air pollution, emissions of some pollutants may increase. Understanding these types of trade-offs are extremely important if we are to deploy this technology across Europe and the world." CCS technologies require approximately 15 – 25 % more energy depending on the particular type of technology used, so plants with CCS need more fuel than conventional plants. This in turn can lead to increased 'direct emissions' occurring from facilities where CCS is installed, and increased 'indirect emissions' caused by the extraction and transport of the additional fuel. The EEA report identifies some of the potential benefits and trade-offs for the main air pollutants.

Global Warming Effects - Global Warming Climate Hot Map Carbon capture and storage – a vital part of our climate change response One of the biggest challenges in our fight against climate change is reducing greenhouse gas (GHG) emissions from the energy sector. Approximately 87% of current global primary energy supplies (and 67% of electricity generation) come from the fossil fuels coal, oil and gas. Worse still, energy-related GHG emissions are projected to rise by over 50% by 2030, mainly due to rapid developments in China and India. Much research in recent years has shown that no single technology or strategy will be sufficient to curb rising emissions. Carbon capture and storage (CCS), or geosequestration, is one such tool. Indeed, numerous studies by the International Energy Agency (IEA), the Intergovernmental Panel on Climate Change and many governments around the world see CCS as an essential technology for reducing emissions. How does CCS work? The first step in CCS is to capture carbon dioxide (CO₂) from large industrial sources, such as power stations. Click to enlarge CCS is already happening