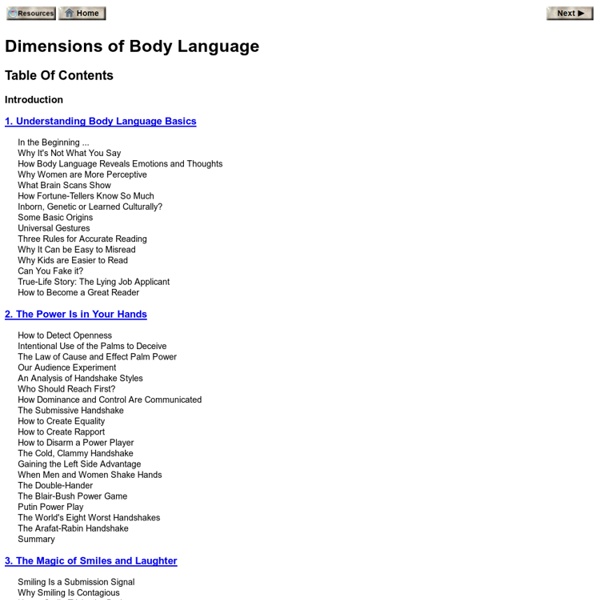 Table Of Contents Introduction 1. Understanding Body Language Basics In the Beginning ... Why It's Not What You Say How Body Language Reveals Emotions and Thoughts Why Women are More Perceptive What Brain Scans Show How Fortune-Tellers Know So Much Inborn, Genetic or Learned Culturally? 2. How to Detect Openness Intentional Use of the Palms to Deceive The Law of Cause and Effect Palm Power Our Audience Experiment An Analysis of Handshake Styles Who Should Reach First? 3. Smiling Is a Submission Signal Why Smiling Is Contagious How a Smile Tricks the Brain Practicing the Fake Smile Smugglers Smile Less Five Common Types of Smiles Why Laughter Is the Best Medicine Why You Should Take Laughter Seriously Why We Laugh and Talk, But Chimps Don't How Humor Heals Laughing Till You Cry How Jokes Work The Laughter Room Smiles and Laughter Are a Way of Bonding Humor Sells The Permanent Down-Mouth Smiling Advice For Women Laughter In Love Summary 4. 5. 6. How the Hands Talk On the One Hand... 7. 8.

How to Persuade People Persuasion is one basic motive behind human interaction. Whether you are talking to yourself or talking to others, we constantly tune our mind and heart either to persuade ourselves or to persuade people around us. One can learn the art of persuasion by having enhancing their intrapersonal skills, interpersonal skills, interaction skills (communication skills), imparting skills (presentation skills) and influencing skills, one can learn the art of

Rethink Your Thoughts About Thinking Your beliefs about the way you think can shape your life in surprising ways. A spate of recent findings suggest that targeting such metacognition can help relieve mood and anxiety disorders, and it may even reduce symptoms of psychosis. Metacognition often takes the form of a value judgment about one's thoughts, such as “It's bad that I overanalyze everything.” Research has shown that these metacognitive beliefs can play an important role in obsessive-compulsive disorder, depression and generalized anxiety disorder, among others. In particular, they may matter more than the way we frame situations in our mind, such as by focusing on the negative aspects of a life event. 45 Life Lessons, written by a 90 year old 1. Life isn’t fair, but it’s still good. 2.

Lateral Thinking Puzzles - Preconceptions Lateral thinking puzzles that challenge your preconceptions. 1. You are driving down the road in your car on a wild, stormy night, when you pass by a bus stop and you see three people waiting for the bus: 1. An old lady who looks as if she is about to die. 2. An old friend who once saved your life. 3. Spite Is Good. Spite Works. Photo The “Iliad” may be a giant of Western literature, yet its plot hinges on a human impulse normally thought petty: spite. Achilles holds a festering grudge against Agamemnon (“He cheated me, wronged me ... He can go to hell...”) turning down gifts, homage, even the return of his stolen consort Briseis just to prolong the king’s suffering. Now, after decades of focusing on such staples of bad behavior as aggressiveness, selfishness, narcissism and greed, scientists have turned their attention to the subtler and often unsettling theme of spite — the urge to punish, hurt, humiliate or harass another, even when one gains no obvious benefit and may well pay a cost. Evolutionary theorists, by contrast, are studying what might be viewed as the brighter side of spite, and the role it may have played in the origin of admirable traits like a cooperative spirit and a sense of fair play.

34 Test Answers That Are Completely Wrong But Totally Genius At The Same Time Not every one is born smart and gifted, but some of these kids are Einstein’s in disguise. Just look at their answers. The ability to think outside the box is a highly sought after skill, and a lot of these answers possess that. These are geniuses in the making. Here are 34 of these genius answers, which are completely wrong but totally right at the same time. How to Memorize Verbatim Text If you are visiting from StumbleUpon and like this article and tool, please consider giving it a thumbs up. Thanks! Memorizing does not have to be as hard as most people make it. The problem is that most people only know how to memorize by reading the same thing over and over again. You have to learn to memorize. Schizophrenia Revealed To Be 8 Genetically Distinct Disorders Just over 1 percent of the American population has been diagnosed with schizophrenia, a severe mental disorder that causes debilitating symptoms including paranoid delusions, auditory hallucinations, and impaired social behavior. A new study has revealed that schizophrenia is not one disease, but eight disorders with genetically distinct causes. This could dramatically change how schizophrenia is diagnosed and treated. The research was led by C. Robert Cloninger of Washington University School of Medicine in St.

24 Clever Print Ads In print advertising world, agencies are bound to reflect their message solely with an image and they generally count on intelligence to accomplish this. Smart ideas on great visuals attract audience’s attention easily and they become a kind of art in the end. Here are some of the latest creations, each of which are virtual proof of what we’ve stated so far. How do you create a product people want to buy? « Unicornfree with Amy Hoy: Creating And Selling Your Own Products Stop me if you’ve heard this one. Have you ever found yourself mired in this process? Come up with idea!Build idea!Put idea online… Wait for sales…… wait for sales…Double down and try to figure out “product-market fit”, in other words: Who wants to buy this?

Reason Behind Increasing Food Allergies Discovered Try to remember grade school. (This may take either a few seconds or hours, depending on how far into the vault those memories are located.) Remember when it came time for lunch. Brilliantly Easy Makeup Tips You Never Knew About 1 Tightline Your Eyes A great, lesser-known trick to make your eyelashes look fuller is to tightline them. This technique is practically invisible and it also really helps to define your eyes. Take an eyeliner, as long as it’s not a liquid formulation, and use an eyeliner brush, either flat or angled, whichever you prefer, to apply the eyeliner underneath your top eyelashes, not above them. That area is called the waterline and because it tends to be naturally wet, you will need to really work the pigment into the skin.

10 Ways To Overcome Overwhelm Are you a lippy driver, specializing in drive-by insults and graphic hand gestures? “Forget world peace buddy- visualize using your turn signal. Hey, if you don’t like the way I drive, stay off the sidewalk…….. “ and similar pleasantries. You can tell a lot about a person by the way they drive. Maybe more to the point, you can tell a lot about yourself by the way you REACT to the way other people drive. As George Carlin said, “Anybody driving slower than you is an idiot and anyone driving faster is a maniac.”