Annie Murphy Paul: What Your Eyes Say About How You Think And Learn 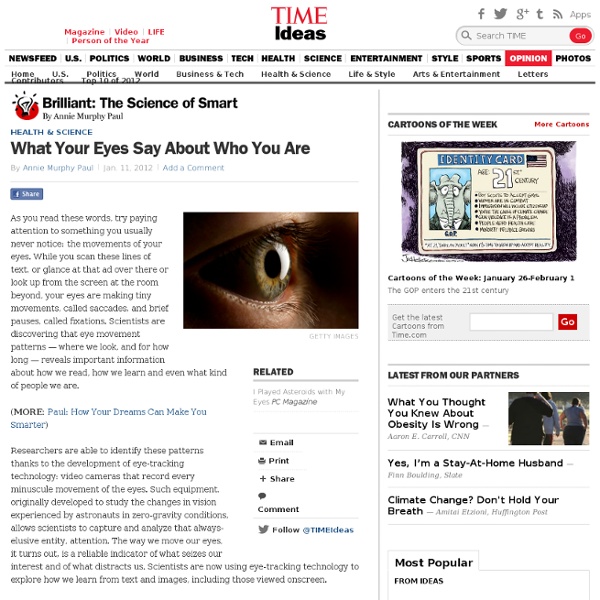 As you read these words, try paying attention to something you usually never notice: the movements of your eyes. While you scan these lines of text, or glance at that ad over there or look up from the screen at the room beyond, your eyes are making tiny movements, called saccades, and brief pauses, called fixations. Scientists are discovering that eye movement patterns — where we look, and for how long — reveals important information about how we read, how we learn and even what kind of people we are. (MORE: Paul: How Your Dreams Can Make You Smarter) Researchers are able to identify these patterns thanks to the development of eye-tracking technology: video cameras that record every minuscule movement of the eyes. Such equipment, originally developed to study the changes in vision experienced by astronauts in zero-gravity conditions, allows scientists to capture and analyze that always-elusive entity, attention. Of course, disrupting our attention is what advertising is all about. Related:  Extra Pounds□

6 Life Lessons I Already Know, But Keep Forgetting (And Then Remembering Again) My definition of truth is “something you keep stumbling into, again and again, in different forms.” I, like most people, spent most of my life wanting a quick fix for my suffering. My biggest epiphany (and greatest disillusionment) was when I realized that all the life lessons I’d learned, all of the epiphanies I’d had about my healing and happiness, would have to be relearned again and again. Though I’ve seen the truth, I keep losing it and, then, having to find it again. I am, like everyone else, on a journey of my own, a journey where I encounter the same truths as everyone else in my own unique forms. All I can do is laugh it off and find my way back to the path once again. Without further ado, here are the 6 life lessons that I already know, but keep forgetting (and then remembering again). 1. I used to think that happy, healed, successful people knew something I didn’t, some magic secret that made them 100% certain of themselves. 2. I felt like a freak. 3. 4. Popular Now 5. 6.

How To Stop Absorbing Other People’s Negative Energy By Jesse Herman and Steven Bancarz| Empathy is the ability to recognize and feel other peoples emotions. Sympathy is feeling compassion for other people. Often times to be an “empath” means that you are absorbing much of the pain and suffering in your environment, which can sacrifice your won ability to function at a high level. If you have every been in a room with a negative person, you know just how toxic their energy can be. Learning to stop absorbing other people’s energies is such a great spiritual skill to have. 1) Remember, you can’t please everyone If someone is bullying you, complaining about you, or dissing you, do not make it your mission to try to convince that person to like you. Not everyone is going to like you. Also remember, you can’t change everyone. 2) Be careful who you invite into your life Your body, mind and direct environment is your temple. If you give a person a piece of bread one day, they will be asking for the loaf the next. 3) Stop paying attention

List of forms of word play This is a list of techniques used in word play with Wikipedia articles. Techniques that involve the phonetic values of words Mondegreen: a mishearing (usually unintentional) ase as a homophone or near-homophone that has as a result acquired a new meaning. The term is often used to refer specifically to mishearings of song lyrics (cf. soramimi).Onomatopoeia: a word or a grouping of words that imitates the sound it is describingRhyme: a repetition of identical or similar sounds in two or more different words Alliteration: matching consonants sounds at the beginning of wordsAssonance: matching vowel soundsConsonance: matching consonant soundsHolorime: a rhyme that encompasses an entire line or phraseSpoonerism: a switch of two sounds in two different words (cf. sananmuunnos)Janusism: the use of phonetics to create a humorous word (e.g. GAYsha from Geisha)) Techniques that involve semantics and the choosing of words Techniques that involve the manipulation of the entire sentence or passage

100 Exquisite Adjectives By Mark Nichol Adjectives — descriptive words that modify nouns — often come under fire for their cluttering quality, but often it’s quality, not quantity, that is the issue. Plenty of tired adjectives are available to spoil a good sentence, but when you find just the right word for the job, enrichment ensues. Subscribe to Receive our Articles and Exercises via Email You will improve your English in only 5 minutes per day, guaranteed! 21 Responses to “100 Exquisite Adjectives” Rebecca Fantastic list! 18 Common Words That You Should Replace in Your Writing It’s a familiar scene: you’re slumped over your keyboard or notebook, obsessing over your character. While we tend to agonize over everything from structure to backstory, it’s important to weigh how you write something too. A perfectly constructed world is flat on the page if you use feeble, common words. Good High on any list of most used English words is “good.” New Another of the common words in English is “new.” Long Much like “new,” “long” is spent, yet it doesn’t always register as such while you’re writing. Old “Old” is certainly one of those common words that means more to readers if you’re specific about how old a subject is. Right “Right” is also among the common words that tends to slip through our writer filters. Different Here’s another adjective that falls a bit flat for readers, but can also easily be improved by getting more specific. Small “Small” is another adjective that is too generic for writing as good as yours. Large Next Young Never Things All Feel Seem Almost Just Went Related

Welcome | Random Acts of Kindness 30 traits of an Empath (How to know if you're an Empath) By: Christel Broederlow What is an empath? Being an empath is when you are affected by other people’s energies, and have an innate ability to intuitively feel and perceive others. Your life is unconsciously influenced by others’ desires, wishes, thoughts, and moods. Empaths are often quiet achievers. However, they can be the exact opposite: reclusive and apparently unresponsive at the best of times. Empaths have a tendency to openly feel what is outside of them more so than what is inside of them. Empaths are more inclined to pick up another’s feelings and project it back without realizing its origin in the first place. Without a doubt, this emotional withholding can be detrimental to one’s health, for the longer one’s thoughts and/or emotions aren’t released, the more power they build. Empaths are sensitive to TV, videos, movies, news and broadcasts. You will find empaths working with people, animals or nature with a true passion and dedication to help them. 1. 2. 3. 4. 5. 6. 7. 8. 9.

You are missed — Better Humans “Something feels missing from my life but I can’t quite put my finger on it.” I can’t tell you how many times I hear some variation of that every week. (It’s a lot.) I hear it from tech entrepreneurs who are on the verge of burn out, writers who are experiencing a temporary block, photographers who are making a ton of money working with big brands, and designers who have a full plate of client work. I hear it from friends at Facebook, at Google, and at Apple. After listening to unique story after story, and each person attempting to describe what is happening in their life, it dawned on me that what was missing from every single story was very simple. “You are missing from your own story,” I said aloud to my friend the other day. He paused mid-sentence and thought about my observation. “I have stopped writing,” he said. “How much time do you spend with yourself?” “Close to none,” he said. “You are disconnected from yourself,” I said. 1) Morning pages. This morning I feel… My soul longs to…

7 Body Language Tricks To Make Anyone Instantly Like You There’s no question that body language is important. And, according to Leil Lowndes in her book “How To Talk To Anyone,” you can capture — and hold — anyone’s attention without even saying a word. We’ve selected the best body language techniques from the book and shared them below: The Flooding Smile “Don’t flash an immediate smile when you greet someone,” says Lowndes. Instead, pause and look at the other person’s face for a second, and then let a “big, warm, responsive smile flood over your face and overflow into your eyes.” Even though the delay is less than a second, it will convince people your smile is sincere and personalised for them. Sticky Eyes “Pretend your eyes are glued to your conversation partner’s with sticky warm taffy,” Lowndes advises. You can also try counting your conversation partner’s blinks. Epoxy Eyes In a group of people, you should watch the person you are interested in, no matter who else is talking. The Big-Baby Pivot Limit the Fidget Hang By Your Teeth

Top 7 Semantic Search Engines There’s no denying the power and popularity of the Google search engine, and in comparison to other similar search engines such as Bing, where results are based on page rankings and algorithms, they excel. But there are other ways to search the web, using what are known as semantic search engines. Using a semantic search engine will ensure more relevant results based on the ability to understand the definition of the word or term that is being searched for, rather than on numbers. This is a list of the top 7 search engines to get you started in the world of semantic searching. Kngine Kngine’s search results are divided into either web results, or image results. Kngine currently contains more than 8 million Concepts, and that is where the site’s strength lies. You can quickly share results from Kngine on Twitter, Facebook, Digg and Delicious and Kngine can be set as your default search engine if you are using Firefox, Google Chrome or Internet Explorer. Hakia [NO LONGER WORKS] Kosmix Evri