The Books of the Decade 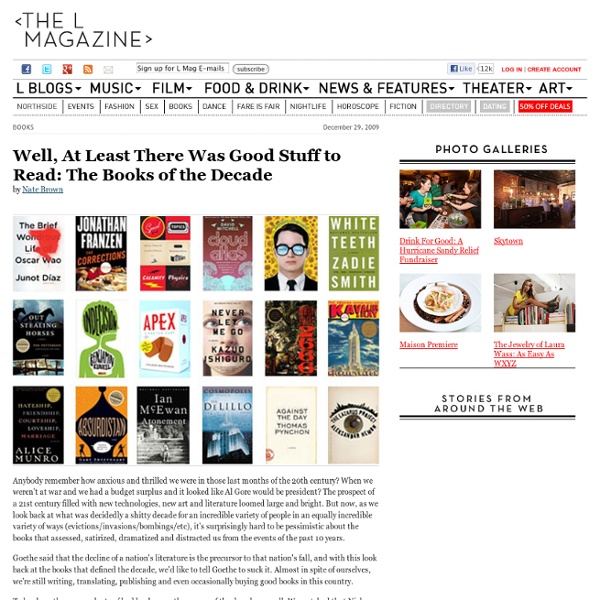 Anybody remember how anxious and thrilled we were in those last months of the 20th century? When we weren't at war and we had a budget surplus and it looked like Al Gore would be president? The prospect of a 21st century filled with new technologies, new art and literature loomed large and bright. But now, as we look back at what was decidedly a shitty decade for an incredible variety of people in an equally incredible variety of ways (evictions/invasions/bombings/etc), it's surprisingly hard to be pessimistic about the books that assessed, satirized, dramatized and distracted us from the events of the past 10 years. Goethe said that the decline of a nation's literature is the precursor to that nation's fall, and with this look back at the books that defined the decade, we'd like to tell Goethe to suck it. Almost in spite of ourselves, we're still writing, translating, publishing and even occasionally buying good books in this country.

Learn 40 Languages for Free Advertisement Get FREE Audio Books from Audible.com and Audiobooks.com How to learn languages for free? This collection features lessons in 48 languages, including Spanish, French, English, Mandarin, Italian, Russian and more. Download audio lessons to your computer or mp3 player and you’re good to go. edgar allan poe Personal tragedy was, unfortunately, a recurring theme throughout Edgar Allan Poe's life. Born in Boston in 1809 to actor parents, he never knew his father David Poe, who left his mother and disappeared soon after Edgar was born, then died in Virginia in 1810. His mother, who suffered from tuberculosis (then called consumption), died in Richmond, Virginia in late 1811, orphaning Edgar, his older brother William Henry, and half-sister Rosalie. Frances Allan of Richmond convinced her wealthy merchant husband John to take the child Edgar into their home. It was here that Edgar was to be raised, with his early influences being the stories of house slaves and the tales told by skippers and sea merchants. The dead and dying would always have a strong hold over Edgar, as demonstrated by the anecdote that a six-year old Edgar was once "seized with terror" as he passed by a local graveyard, convinced that the spirits of the undead would run after him.

Buon Appetito! 20 Yummy Homemade Pasta Sauces We’re pretty sure that pasta is one of those foods that’s just universally loved by everyone. It’s right up there with chocolate chip cookies. We’ve already shown you some awesome ways to make pasta at home, so why not go all out and make your own sauce, too? Make them today, and enjoy them whenever you want (just make sure to stick ‘em in your fridge!). From tomatillo pesto to cauliflower sauce, here are 20 delectable homemade sauces that’ll have you saying “holy moly” about your ravioli!

Top Ten Best Novels You've Never Heard Of - The Journal Pulp Or perhaps you have. Yet the following list, laid out in no particular order (with the exception of Number 1), is relatively obscure: Nothing is as it seems under the sharp western sun. After recovering from an enigmatic and near-fatal illness, Gasteneau, a man with an iron will, glimpses something so extraordinary and so horrific that he feels his life irrevocably altered. But did he really see what he thinks he saw? 12 Greatest Apocalyptic Novels Of All Time After scouring book reviews and Wikipedia, a list of the Top 12 Best Apocalyptic Novels was born. The books on this list take you down the darkest paths in uncivilized worlds, from cannibalistic gangs to vampire infected corpses. If this list doesn't get you thinking on the quickest way stock your basement full of water, canned goods and rifles, I don't know what will! Enjoy! World War Z

Top 40 Useful Sites To Learn New Skills The web is a powerful resource that can easily help you learn new skills. You just have to know where to look. Sure, you can use Google, Yahoo, or Bing to search for sites where you can learn new skills how to write fiction - hemingway Image by Lloyd Arnold via Wikimedia Commons Before he was a big game hunter, before he was a deep-sea fisherman, Ernest Hemingway was a craftsman who would rise very early in the morning and write. His best stories are masterpieces of the modern era, and his prose style is one of the most influential of the 20th century. Hemingway never wrote a treatise on the art of writing fiction. He did, however, leave behind a great many passages in letters, articles and books with opinions and advice on writing. Some of the best of those were assembled in 1984 by Larry W.

60 Historical Photos Worth 1000 Words posted by Katharine J. Tobal The American newspaper editor Arthur Brisbane said that “a picture is worth a thousand words” in 1911. Over 100 years later, this still rings true.