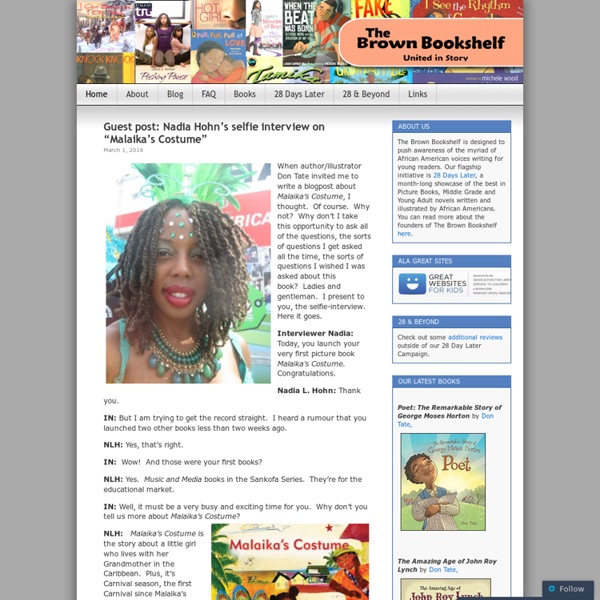 Young Adult Books-What We're Reading Now Imagínense Libros: Celebrating Latino Children's Literature, Literacy, and Libraries The Importance of Multicultural Children's Books Reprinted by permission Literature is a powerful vehicle for helping children understand their homes, communities and the world. Even before young children can read themselves, family members, childcare providers and teachers are reading them stories about other children in far-away places, sometimes from the distant past, or about children whose lives are not unlike their own. The impressions and messages contained in these stories can last a lifetime. According to the Cooperative Children's Book Center, University of Wisconsin, Madison, of the 4,500 children's books published in the United States in 1997, 88 were by African-American authors and/or illustrators, 88 were by Latino/a authors or about Latino/a themes, 64 books were on Native American themes and 66 were about Asians and Asian Americans. Unfortunately, not all children's literature sends the messages that we want children to learn. 1For updated statistics, please see Children's Books by and about People of Color

The Adventures of Library Girl Minority Books | Teacher Reading Resources | Books for Homeschooling Multicultural Fiction for Teenagers | Madison Public Library The Absolutely True Diary of a Part-Time Indian by Sherman Alexie. 2007Budding cartoonist Junior leaves his troubled school on the Spokane Indian Reservation to attend an all-white farm town school where the only other Indian is the school mascot. American Born Chinese by Gene Luen Yang. 2006Alternates three interrelated stories about the problems of young Chinese Americans trying to participate in the popular culture. Presented in comic book format. The Astonishing Life of Octavian Nothing, Traitor to the Nation. Bamboo People by Mitali Perkins. 2010Two Burmese boys, one a Karenni refugee and the other the son of an imprisoned Burmese doctor, meet in the jungle and in order to survive they must learn to trust each other. Before We Were Free by Julia Alvarez. 2002In the early 1960s in the Dominican Republic, twelve-year-old Anita learns that her family is involved in the underground movement to end the bloody rule of the dictator, General Trujillo. Down to the Bone by Mayra L.

Welcome to my Tweendom CBCA Tasmania blog Resource: Teaching Multicultural Literature: A Workshop for the Middle Grades Workshop 1: Engagement and Dialogue: Julia Alvarez, James McBride, Lensey Namioka, and more In New York City, Carol O'Donnell and her students explore themes of multiple worlds and dual identities. They read poetry by Diana Chang and Naomi Shihab Nye, the novel The Color of Water by James McBride, essays and short stories by Gish Jen, Khoi Luu, Lensey Namioka, and Julia Alvarez, and a monologue by Tina Lee. Through a series of innovative drama, role-playing, and writing activities, students examine the social and cultural experiences of the characters, and reflect on their own definitions and experiences of identity. Go to this unit. Workshop 2: Engagement and Dialogue: Judith Ortiz Cofer and Nikki Grimes The workshop begins with a profile of the writer Judith Ortiz Cofer and then moves to Vista, California, where Akiko Morimoto and her students read short stories from Cofer's collection, An Island Like You.

Reading Tween: Book Reviews A House Called Awful End by Philip Ardagh A MEASURE OF DISORDER by Alan Tucker A Cure For Chaos by Alan Tucker A Series Of Unfortunate Events by Lemony Snicket The Alchemyst by Michael Scott Artemis Fowl by Eoin Colfer Athena the Wise by Joan Holub and Suzanne Williams Beautiful Darkness by Kami Garcia and Margaret Stohl Behemoth by Scott Westerfeld Big Nate by Lincoln Peirce The Brimstone Key: The Grey Griffins: The Clockwork Chronicles #1 by J.S. Cam Jansen by David A. Can You See What I See On a Scary Night by Walter Wick CHAINS by Laurie Halse Anderson The Clockwork Three by Matthew J. City of Fire by Laurence Yep Courtney Crumrin and the Night Things (MANGA) by Ted Naifeh Dawn (Warriors The New Prophecy book 3) by Erin Hunter Darke: (Septimus Heap book 6 ) by Angie Sage The Diary of a Wimpy Kid: The Ugly Truth by Jeff Kinny Diary of a Wimpy Kid: The Last Straw by Jeff Kinny Dragon Keeper by Carole Wilkinson Edgar and Ellen Under Town by Charles Ogden Faery Rebels by R.J. Fused by Kari Lee Townshend

Australia - Literature - Children’s Literature - Goethe-Institut  Australia doesn’t have a strong history of overtly banning books in schools and libraries – unlike, for example, the United States, where sometimes it feels as if book-banning is a "national pastime". But that’s not to say that it has never happened here, or that covert censorship of actual or potentially controversial books doesn’t happen. And it’s also true that Australian children’s and youth literature have not got off "scott free" over the years. In fact, there have been a number of vigorous debates about books written for children and teenagers both in the public domain and within the literary and educational communities. The Young Adult Novel When I first began specialising in the field, it was the 1990s, the era of what was known as “dirty realism” – which also happened to coincide with the growth of a new niche publishing market in Australia – the young adult (YA) novel. Marsden in particular came under enormous criticism for his YA fiction.