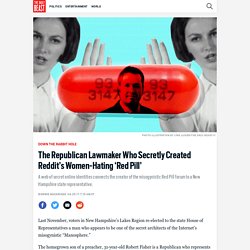 Last November, voters in New Hampshire’s Lakes Region re-elected to the state House of Representatives a man who appears to be one of the secret architects of the Internet’s misogynistic “Manosphere.” The homegrown son of a preacher, 31-year-old Robert Fisher is a Republican who represents New Hampshire’s Belknap County District 9. In addition to his legislative duties, Fisher owns a local computer repair franchise, and in his spare time, seems to have created the web’s most popular online destination for pickup artistry and Men’s Rights activists, The Red Pill, according an investigation by the Daily Beast. Donald Trump praises Scotland for voting to leave the EU, but it didn't. Donald Trump praised the Scottish this morning for "[taking] their country back" in the UK's vote to leave the European Union. 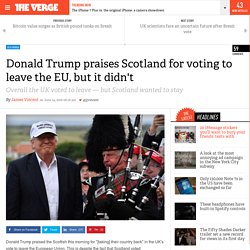 This is despite the fact that Scotland voted overwhelmingly to stay in the EU, with 62 percent of the population backing the Remain campaign. However, this wasn't enough to change the total outcome of the UK vote, which backed the decision to leave 52 percent to 48 percent. "Basically, they took back their country" Trump is visiting Scotland to mark the opening of his Turnberry golf resort, where he was greeted by staff wearing red "Make Turnberry Great Again" baseball hats.

According to Variety, he told reporters at the resort that Brexit was a "great thing," and added: "Basically, they took back their country. " How the Trump Organization's Foreign Business Ties Could Upend U.S. National Security. If Donald Trump is elected president, will he and his family permanently sever all connections to the Trump Organization, a sprawling business empire that has spread a secretive financial web across the world? 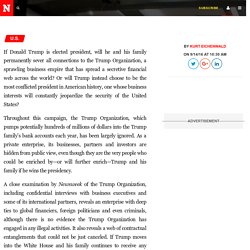 Or will Trump instead choose to be the most conflicted president in American history, one whose business interests will constantly jeopardize the security of the United States? Throughout this campaign, the Trump Organization, which pumps potentially hundreds of millions of dollars into the Trump family’s bank accounts each year, has been largely ignored. As a private enterprise, its businesses, partners and investors are hidden from public view, even though they are the very people who could be enriched by—or will further enrich—Trump and his family if he wins the presidency. Donald Trump waves during a campaign event in Albany, New York, April 11, 2016. John Taggart/Bloomberg/Getty. 176 Reasons Donald Trump Shouldn't Be President. Uk.businessinsider. Donald Trump in a pro-ISIS propaganda video. 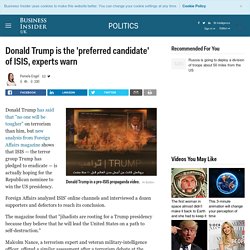 Al-Battan Donald Trump has said that "no one will be tougher" on terrorism than him, but new analysis from Foreign Affairs magazine shows that ISIS — the terror group Trump has pledged to eradicate — is actually hoping for the Republican nominee to win the US presidency. Foreign Affairs analyzed ISIS' online channels and interviewed a dozen supporters and defectors to reach its conclusion.

The magazine found that "jihadists are rooting for a Trump presidency because they believe that he will lead the United States on a path to self-destruction. " Malcolm Nance, a terrorism expert and veteran military-intelligence officer, offered a similar assessment after a terrorism debate at the Comedy Cellar in New York City last month. "Donald Trump is ISIS' preferred candidate and anything that he does is going to be done to the detriment of the United States," Nance told Business Insider, adding, "Donald Trump is unstable.

" Despite the last-minute meeting, Mexico likely won't forget Trump's insults. Play Video Donald Trump has had a lot to say about immigration reform during his presidential campaign. 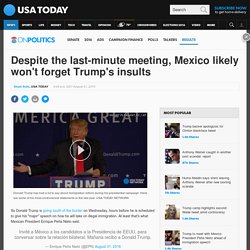 Here are some of his most controversial statements in the last year. Tim Kaine Attacks Donald Trump's Lack of Transparency: 'Something Strange Is Going On' Democratic vice presidential nominee Tim Kaine hit GOP nominee Donald Trump for his failure to disclose his foreign business deals and debts, painting them as a possible national security risk. 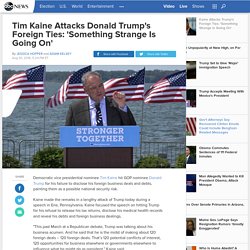 Kaine made the remarks in a lengthy attack of Trump today during a speech in Erie, Pennsylvania. Kaine focused the speech on hitting Trump for his refusal to release his tax returns, disclose his medical health records and reveal his debts and foreign business dealings. "This past March at a Republican debate, Trump was talking about his business acumen. And he said that he is the midst of making about 120 foreign deals -- 120 foreign deals. That’s 120 potential conflicts of interest, 120 opportunities for business elsewhere or governments elsewhere to influence what he might do as president,” Kaine said.

While Kaine’s running mate, Hillary Clinton, has faced controversy regarding foreign donations to the Clinton Foundation, Kaine described Trump’s dealings with Russia and China as problematic. Donald Trump, Mexican President Enrique Pena Nieto to meet. "I have accepted the invitation of President Enrique Pena Nieto, of Mexico, and look very much forward to meeting him tomorrow," Trump tweeted as reports swirled that Trump was mulling a last-minute trip to Mexico. 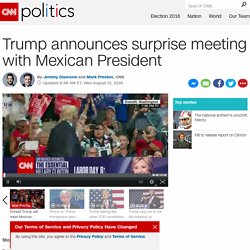 The office of the Mexican President confirmed in a tweet late Tuesday night that Trump had accepted Peña Nieto's invitation and that the two will meet privately on Wednesday. "In the past days, the President @EPN invited both U.S. presidential candidates to a dialogue on the bilateral relations between Mexico and the United States.

Mr. @realDonaldTrump has accepted the invitation and will meet tomorrow in private with the President @EPN. " Trump rally emcee: Ban women voters who use ‘free contraception’ and we will ‘win every election’ Donald Trump Blames Hillary Clinton for Anthony Weiner’s Sexts. Perv vs. 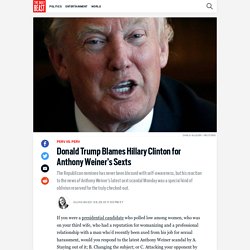 Perv The Republican nominee has never been blessed with self-awareness, but his reaction to the news of Anthony Weiner’s latest sext scandal Monday was a special kind of oblivion reserved for the truly checked-out. If you were a presidential candidate who polled low among women, who was on your third wife, who had a reputation for womanizing and a professional relationship with a man who’d recently been axed from his job for sexual harassment, would you respond to the latest Anthony Weiner scandal by A.

Staying out of it; B. Changing the subject; or C. Trump Would Deport 'Criminal Illegal Immigrants' In First Hour Of Presidency. At an event in Iowa Saturday, Donald Trump continued to be vague about his comprehensive immigration plan, but promised he would deport "criminal illegal immigrants" within an hour of being sworn in as president. 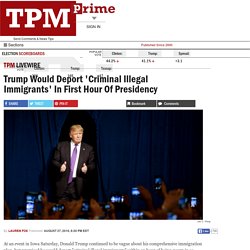 "We are going to get rid of the criminals and it's going to happen within one hour after I take office, we start, okay? " Trump said according to a report from the Washington Post. "In this task, we will always err on the side of protecting the American people. We will use immigration law to prevent crimes. " CBS News journalist caught in turmoil at canceled Donald Trump rally. Last Updated Mar 12, 2016 8:17 AM EST A CBS News journalist covered all of Friday night's events until he himself was detained. 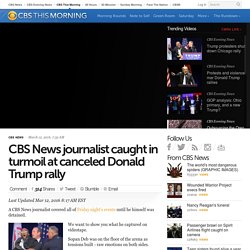 We want to show you what he captured on videotape. Sopan Deb was on the floor of the arena as tensions built - raw emotions on both sides. He interviews both protesters and Trump supporters. Police clear the pavilion, and the streets outside are quickly blocked. Uk.businessinsider. Thomson Reuters New York Times journalist Nicholas Kristof made waves with a single sentence in a recent op-ed on how the US could reduce gun deaths: In America, more preschoolers are shot dead each year (82 in 2013) than police officers are in the line of duty (27 in 2013), according to figures from the Centers for Disease Control and Prevention and the FBI. New Zealand says no to Jedis. Mark Hamill, left, Carrie Fisher and Harrison Ford in a scene from "Star Wars. " (20th Century-Fox Film Corp. via AP) New Zealand's Jedi Society was established in April 2014.

Nazi banner unfurled for WWII film sparks anger in France (and selfies) “There was nothing around to explain what was going on. The scene was just surreal.” He added that tourists began taking selfies in front of the banner, which will be used in a film adaptation of French author Joseph Joffo’s memoir, A Bag of Marbles, about growing up during the Holocaust. A Nazi flag is draped over the side of a building for the filming of French director Christian Dugay's "Le sac de billes" in Nice, southeast France Photo: AFP/Getty. Appeals court overturns approval of pesticide over concerns about declining honey bee numbers - 9/10/2015 10:33:13 PM.

The U.S. Environmental Protection Agency did not adequately study the pesticide sulfoxaflor before approving its use in 2013 on a wide variety of crops, including citrus and cotton, the 9th U.S. Circuit Court of Appeals said. Initial studies showed sulfoxaflor was highly toxic to honey bees, and the EPA was required to get further tests, Circuit Judge Mary Schroeder said. People are getting shot by toddlers on a weekly basis this year.

King Crabs March Towards Antarctica. CBBC Newsround. CNN Student News. DOGO News. Kids Washington Post. Scholastic News. PBS NewsHour Extra. Time For Kids. Tween Tribune. The Why Files. Youngzine. Should It Be Illegal for Supermarkets to Waste Food? In 2010, U.S. supermarkets and grocery stores threw out 43 billion pounds, or $46.7 billion worth, of food, according to the U.S.

Department of Agriculture (USDA). Saudi Princess Reema Speaks About Steps Forward. Photo: Courtesy of Princess Reema Bint Bandar Al Saud. Princess Reema Bint Bandar Al Saud, a member of the Saudi royal family, businesswoman and public health advocate, is championing women's right to vote in Saudi Arabia. For the first time in history, women in Saudi Arabia are able vote, register as candidates, and run for office in municipal elections, which will be held on December 12. Muslim Teen Arrested For Homemade Clock Invited To MIT, UT Austin, Facebook. On Monday, 14-year-old Ahmed Mohamed was placed in handcuffs and led out of his school after police thought he brought a "hoax bomb" to his suburban Dallas high school. Ahmed Mohamed Is Silicon Valley's New Hero. Here's how a Texas school explained arresting a 14-year-old Muslim boy for making a clock.