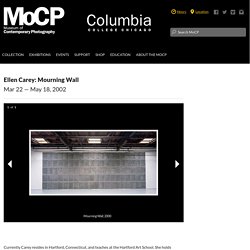 She has received many grants from her home state of Connecticut as well as the Massachusetts Council of the Arts, New Works Grant, New York State Federation for Artists Grant; and a National Endowment for the Arts Award. View in Google Maps. Ellen Carey Photography Andy Grundberg. “Objectivity is the very essence of photography,” the photographer Paul Strand once said, “its contribution and at the same time its limitation.” 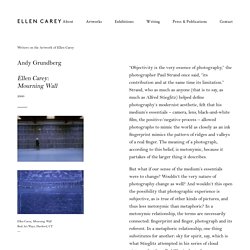 Strand, who as much as anyone (that is to say, as much as Alfred Stieglitz) helped define photography’s modernist aesthetic, felt that his medium’s essentials – camera, lens, black-and-white film, the positive/negative process – allowed photographs to mimic the world as closely as an ink fingerprint mimics the pattern of ridges and valleys of a real finger. The meaning of a photograph, according to this belief, is metonymic, because it partakes of the larger thing it describes. But what if our sense of the medium’s essentials were to change?

Wouldn’t the very nature of photography change as well? And wouldn’t this open the possibility that photographic experience is subjective, as is true of other kinds of pictures, and thus less metonymic than metaphoric? Casting these pictures in terms of photography is only half of their story, however. Online exhibition - Ellen Carey: Polaroid Pulls & Shadows. Ellen CareyPolaroid Pulls & Shadows Shadows & Pulls 2007 Carey creates images that are one-of-a-kind using the Polaroid one-step, peel away process that develops in a mere 60 seconds. 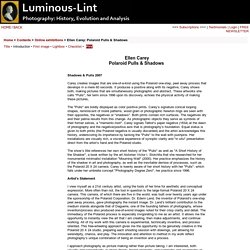 It produces a positive along with its negative, Carey shows both, making pictures that are simultaneously photographic and abstract. These artworks she calls "Pulls", her term since 1996 upon its discovery, echoes the physical activity of making these pictures, The "Pulls" are boldly displayed as color positive prints. Carey’s signature conical looping shapes, reminiscent of moiré patterns, wood grain or photographic Newton rings are seen with their opposites, the negatives or "shadows". 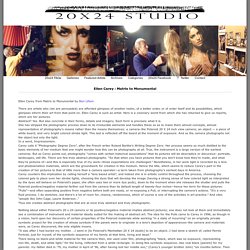 Ellen Carey is such an artist. Hers is a visionary world from which she has returned to give us reports, which are her pictures. Abstract? Yes. Nothing about either Polaroid’s 20 x 24 camera or its positive/negative material implies abstract pictures; one does not look at them and immediately see a combination of instrument and material ideally suited for the making of abstract art. “I had this kind of metaphysical experience…Almost slightly out of body. “I knew instantly–light bulbs went off–” that in this new way of making imagery was an answer to her long personal struggle against photography’s limitations.

ART - A Family Album Of Empty Pictures. AT Real Art Ways in Hartford, one would never know that this is supposed to be the jolly season. 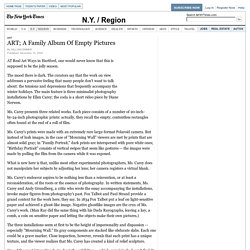 The mood there is dark. The curators say that the work on view addresses a pervasive feeling that many people don't want to talk about: the tensions and depressions that frequently accompany the winter holidays. The main feature is three minimalist photography installations by Ellen Carey; the coda is a short video piece by Diane Nerwen. Ms. Carey presents three related works. Ms. What is new here is that, unlike most other experimental photographers, Ms. Ms. The three installations seem at first to be the height of impersonality and dispassion -- especially ''Mourning Wall.'' One of the most interesting facts about the exhibition -- which surprisingly doesn't find its way into Ms.

Without much visual content to the show, what then is the subject matter? Ellen Carey biography.