List of Research Papers. Here's a listing of what we have thus far. 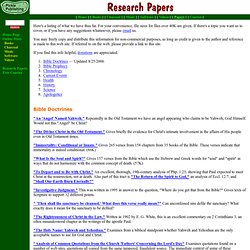 For your convenience, file sizes for files over 40K are given. If there's a topic you want us to cover, or if you have any suggestions whatsoever, please email us. You may freely copy and distribute this information for non-commercial purposes, as long as credit is given to the author and reference is made to this web site. If referred to on the web, please provide a link to this site. If you find this info helpful, donations are appreciated. Bible Doctrines "An 'Angel' Named Yahweh. " "The Divine Christ in the Old Testament. " "Immortality: Conditional or Innate. " "What Is the Soul and Spirit? " "To Depart and to Be with Christ. "

Connecting With Jesus [Conflict Of The Ages Series, Books & Stud 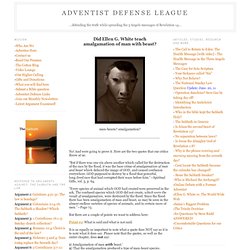 White teach amalgamation of man with beast? Man-beasts? Amalgamation? No! “But if there was one sin above another which called for the destruction of the race by the flood, it was the base crime of amalgamation of man and beast which defaced the image of GOD, and caused confusion everywhere. “Every species of animal which GOD had created were preserved in the ark. Was Adam deceived? The following is number 1 in Dirk Anderson’s list of contradictions between Ellen G. 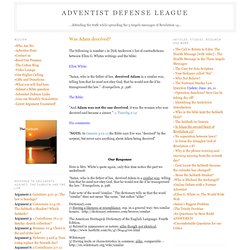 Whites writings and the bible: Ellen White: "Satan, who is the father of lies, deceived Adam in a similar way, telling him that he need not obey God, that he would not die if he transgressed the law. " -Evangelism, p. 598. The Bible: Adventist Defense League. Was Adam with Eve when she was deceived? 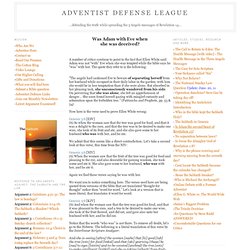 A number of critics continue to point to the fact that Ellen White said Adam was not “with” Eve when she was tempted while the bible says he “was” with her. The quote they refer to is the following: "The angels had cautioned Eve to beware of separating herself from her husband while occupied in their daily labor in the garden; with him she would be in less temptation than if she were alone. But absorbed in her pleasing task, she unconsciously wandered from his side. Who spoke to Cain? The Lord or an Angel? The following is number 6 in Dirk Anderson’s list of contradictions between Ellen G. 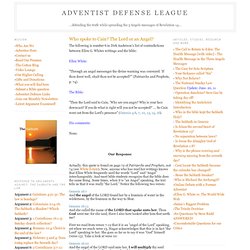 Whites writings and the bible: Ellen White: "Through an angel messenger the divine warning was conveyed: 'If thou doest well, shalt thou not be accepted? '" (Patriarchs and Prophets, p. 74). The Bible: "Then the Lord said to Cain, 'Why are you angry? Adventist Defense League. Alive when Jesus returns? 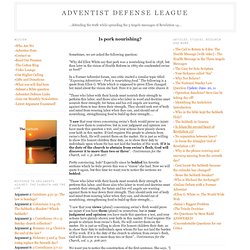 Sometimes, we are asked the following question: "Why did Ellen White say that pork was a nourishing food in 1858, but then later in the vision of Health Reform in 1863 she condemded swine as food? " In a Former Adventist forum, one critic started a simular topic titled “Exposing Adventism – Pork is nourishing food.” Adventist Defense League.

Notice: This is only a section of our study called "Why you need to do your own research. 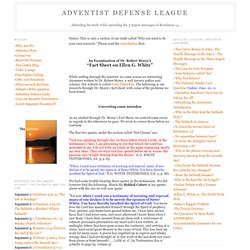 " Please read the introduction first. An Examination of Dr. The "Shut Door" Documents. Statements Relating to the "Shut Door," the Door of Mercy, and the Salvation of Souls by Ellen G. 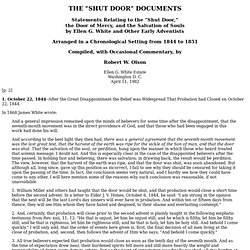 White and Other Early Adventists Arranged in a Chronological Setting from 1844 to 1851 Compiled, with Occasional Commentary, by Robert W. Olson. Is slavery a sin? The following is number 7 in Dirk Anderson’s list of contradictions (the second version) between Ellen G. 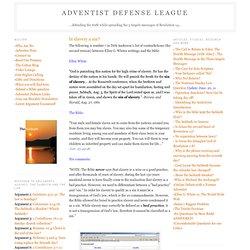 Was Israel destroyed for Gluttony or Lust? The following is number 2 in Dirk Anderson’s list of contradictions between Ellen G. Whites writings and the bible: Ellen White: "God granted their desire, giving them flesh, and leaving them to eat till their gluttony produced a plague. " -Counsels on Diet and Foods, p. 148 The Bible:

Adventist Defense League. Ellen White and the Christmas tree This Holiday, we want to present to our audience a gift, a gift of understanding. Understanding what? Well, some of our critics have grabbed a couple of quotes by Mrs. White and have used them to show that she supported the Christmas tree only as an opportunity to make money for herself. They say that she spoke in one place against pagan symbols, but in another place she commanded to place Christmas trees, a pagan symbol, in the church simply to make money. “God would be well pleased if on Christmas, each church would have a Christmas tree on which shall be hung offerings, great and small, for these houses of worship.”

Examining the first quote Let us take another look at the quote in question. Adventist Defense League. Did Ms. White contradict 1 Timothy 4:1-4? In an article addressing supposed contradictions between Ellen G. White and the bible, one author gathers a quote by Ellen White that says that meat eating will eventually be done away with among God’s people. Here is how he put it: BIBLE: NoNow the Spirit speaketh expressly, that in the latter times some shall depart from the faith ... commanding to abstain from meats, which God hath created to be received with thanksgiving of them which believe and know the truth. EGW: YesAmong those who are waiting for the coming of the Lord, meat eating will eventually be done away.