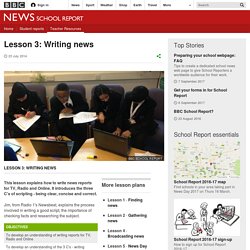 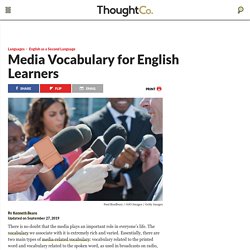 The vocabulary related to media is rich and extremely varied. Essentially, there are two main types of media related vocabulary: vocabulary related to printed word and vocabulary related to the spoken word as used in broadcasts either on radio, TV or through the internet. Study the vocabulary below and then take the gap fill quiz to check your understanding of some of the terms. Use these tips on learning vocabulary to help you remember the words on this list. Wardman - Making the News: A Motivating Writing Skills Project for ESL Students. The Internet TESL Journal Clare Wardmanc.wardman1 {at} yorksj.ac.ukYork St John University (York, UK) Rationale Many ESL students, children and adults alike, dislike or even dread writing tasks in the ESL classroom, finding them boring or difficult (Winer,1992: Cimcoz, 1999). 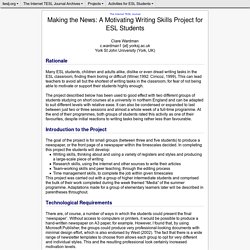 This can lead teachers to avoid all but the shortest of writing tasks in the classroom, for fear of not being able to motivate or support their students highly enough. The project described below has been used to good effect with two different groups of students studying on short courses at a university in northern England and can be adapted to suit different levels with relative ease. Ten Great Activities: Teaching With the Newspaper. Ten terrific classroom activities that use the newspaper to teach all sorts of valuable skills -- including reading and writing for meaning, map reading, media literacy, sequencing, word meaning, and math. "The newspaper is the most widely used of the media [as a teaching instrument in the classroom], the direct result of a national campaign by publishers, known as Newspapers in Education (NIE). Before the advent of NIE, newspapers tended to be used only by secondary school social studies teachers in two-week units or for Friday current events sessions.

Now, however, newspapers are used throughout the school year in every area of the curriculum. " Those are the words of Nola Kortner Aiex, author of Using Newspapers as Effective Teaching Tools. Indeed, the news is more a part of the school curriculum than it ever was -- for many reasons. Read and write for meaning. Read a map. Creating a Newscast ESL Lesson.

Media is an ever-present reality and one that students are intimately familiar with. Monthly topical news lessons. Monthly news lessons are sourced from The Guardian, onestopenglish's principal news partner, and include topical news items with worksheets for you to use in class. The lessons in this section are available at pre-intermediate/intermediate, upper intermediate and advanced levels. All the articles are from the Guardian, onestopenglish's principal news partner. As well as using the language exercises which accompany each article, you can exploit these news texts in a number of ways: as extra reading, especially for advanced students;by asking students to compare the political slant of different news organizations;as a way to start projects on the issues covered, etc. SixPix #45 ESL Listening Game about Horses.

Hey, let's do the listening game. 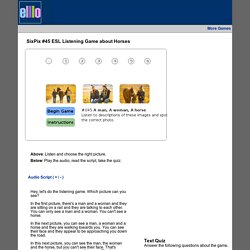 Which picture can you see? In the first picture, there's a man and a woman and they are sitting on a rail and they are talking to each other. You can only see a man and a woman. Television news bulletins. My radio News report. Simple Past (training activities) Relative clauses. PASSIVE VOICE. How to report news. TV news vocabulary. TV news report project. You are hired as a TV anchorman/ anchorwoman by the BBC. 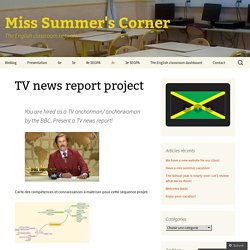 Current events, lesson plans, quizzes, assessments. Time For Kids. Grammar in the News. The Times in Plain English. Zoo Shoots and Kills. Tips on how to make a video news report. Do you want to make a TV news report but have no idea where to start? 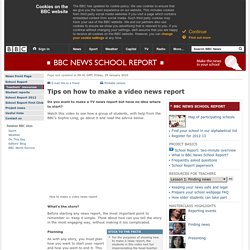 Watch this video to see how a group of students, with help from the BBC's Sophie Long, go about it and read the advice below. How to make a video news report What's the story? Before starting any news report, the most important point to remember is: Keep it simple. Think about how can you tell the story in the most engaging way, without making it too complicated. Planning As with any story, you must plan how you want to start your report and how you want to end it. 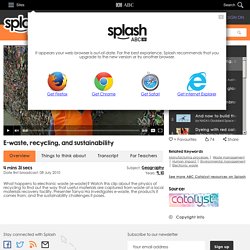 Playing on it are images of recycling trash being picked up by truck and sorted and processed in plants.TANYA HA, REPORTERRight now, you are watching trashy television and I mean that in the nicest possible way. But the way we sort the stuff we want from the stuff we don't all boils down to some beautiful simple physics in action, starting with size and weight.Rubbish passes over a vibrating conveyer belt, some of it falling off.TANYA HAThis incline of vibrating, spinning rubber discs acts like a giant sieve. The lightweight paper and cardboard moves up, heavier, more compact bottles and cans move down.Tanya Ha lowers a textbook. She stands before a white board with algebraic expressions written over it.TANYA HAIf you were paying attention in high school physics you'll know that some metals and their alloys, like iron and steel, are innately magnetic. The Learning Network - The Learning Network Blog. Sweden elections: How do they work? National, regional, and local elections are taking place in Sweden on September 14th. 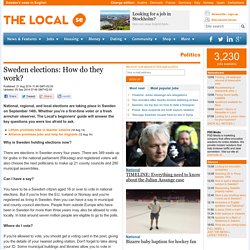 Whether you're a first-time voter or a fresh armchair observer, The Local's beginners' guide will answer the key questions you were too afraid to ask. Why is Sweden holding elections now? There are elections in Sweden every four years. - Radio Sweden 14 oktober 2014 kl 15:00 - Radio Sweden. BBC Radio 4 - Woman's Hour, Sweden: Are Women Living the Dream? Stockholm's shocking take on Halloween. American Bill Schacht missed the spooky outfits, family feasts and charity events he associated with Halloween when he moved to Sweden. 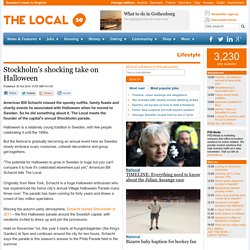 So he did something about it. The Local meets the founder of the capital's annual Shockholm parade. Halloween is a relatively young tradition in Sweden, with few people celebrating it until the 1990s. But the festival is gradually becoming an annual event here as Swedes slowly embrace scary costumes, cobweb decorations and group get-togethers. "The potential for Halloween to grow in Sweden is huge but you can't compare it to how it's celebrated elsewhere just yet," American Bill Schacht tells The Local. Originally from New York, Schacht is a huge Halloween enthusiast who has experienced his home city's annual Village Halloween Parade many times over. Missing the autumn party atmosphere, Schacht started Shockholm in 2011 – the first Halloween parade around the Swedish capital, with residents invited to dress up and join the procession.