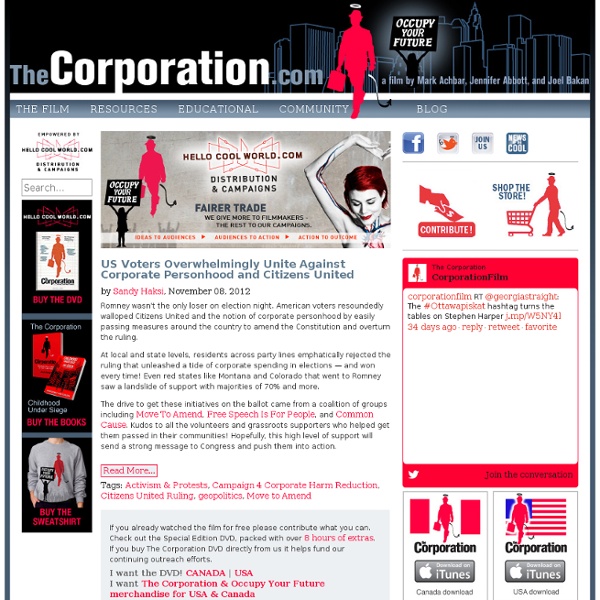 by Katherine Dodds, April 14, 2014 THE CORPORATION has been stunning audiences with its revelations of an out of control business model that mandates the pursuit of profit without regard for anything, or anyone, else. A decade since the film first launched - its' message is more relevant than ever. Join HelloCoolWorld and the makers of The Corporation as we prepare for a 10th Anniversary year of organizing, action and dialogue. A decade ago we had a grassroots hit on our hands, and thousands of people from hundreds of organizations and citizens groups rallied to help us spread the word– but now, in a post 2008, and even post-Occupy world, with Bakan at work on a second book wondering if we are all psychopath’s now – it’s time to gear up again – because we’re not done yet! We need to re-write corporate charters, revive democracy, and revolt against the profit motive at any cost.

Who Rules America? Power, Politics, & Social Change by G. William Domhoff Welcome to WhoRulesAmerica.net, a site about how power is distributed and wielded in the United States. It both builds upon and greatly supplements the book Who Rules America?, now in its 7th edition. The book's new subtitle, "The Triumph of the Corporate Rich," reflects the success of the wealthy few in defeating all of their rivals (e.g., organized labor, liberals, environmentalists) over the course of the past 35 years.

The Revolution Will Not Be Televised The Revolution Will Not Be Televised (a.k.a. Chavez: Inside the Coup) is a 2002 documentary about the April 2002 Venezuelan coup attempt which briefly deposed Venezuelan President Hugo Chávez. A television crew from Ireland's Radio Telifís Éireann happened to be recording a documentary about Chávez during the events of April 11, 2002. Shifting focus, they followed the events as they occurred.

True Stories: Taking Liberties Riding in on a wave of optimism and real belief in their mantra that things can only get better, they proceeded to enact some of the most authoritarian legislation in recent history. With fast-paced satirical style, this Bafta-nominated film shows how, in just over a decade, some rights and freedoms that took centuries to build up have been rolled back or cut away. The entitlement to habeas corpus – no detention without trial – established when the barons took on King John in the 13th century has, in some circumstances, been abolished. Millions of CCTV cameras up and down the country undermine our right to privacy. A series of measures has made it more and more difficult to exercise freedom of speech and already led to the arrest of a large number of peaceful protesters.

The War On Democracy Versión en español 'The War On Democracy' (2007) was John Pilger's first for cinema. It explores the current and past relationship of Washington with Latin American countries such as Venezuela, Bolivia and Chile. Using archive footage sourced by Michael Moore's archivist Carl Deal, the film shows how serial US intervention, overt and covert, has toppled a series of legitimate governments in the Latin American region since the 1950s. The democratically elected Chilean government of Salvador Allende, for example, was ousted by a US backed coup in 1973 and replaced by the military dictatorship of General Pinochet. Guatemala, Panama, Nicaragua, Honduras and El Salvador have all been invaded by the United States.

The Joy of Six: Football documentaries 1) City! (1981) The more things change, the more they stay the same. Here's Manchester City bunging vast sums of money after new players, only to find them not delivering at all. Search a database of the Power Elite Welcome to the Power Elite portal on WhoRulesAmerica.net. Included here is a database of the "Power Elite" in the U.S. as of 2011-2012, defined as the intersection of the boards of directors of the corporate community, the extremely wealthy and well-connected, and the boards and trustees of the policy-planning network. Note that this definition does not include politicans; you will not find any current or former presidents in the database. (See "The Class-Domination Theory of Power" for more information.) There are four different kinds of searches you can do, each of which yields slightly different results. If you search for a person's name and set the results type to People, you will receive information on each person whose name matches the pattern you entered.

My Stuff My Stuff You lock away all your worldly possessions in storage, and decide to take back only one thing a day... What's the first thing that you'd choose? What do you value more than anything, or what's most useful, what's the greatest comfort, what's the ultimate necessity...? In the midst of an existential crisis following a recent break- up, Petri begins his experiment.

The Curse of Oil Three-part series that goes on a revealing journey through the world's oil-producing regions, beyond the familiar territory of the Middle East. Now that the oil price appears to be rising inexorably at the pumps, newspapers are full of gloomy predictions related to our increasing addiction to perishable reserves of oil. Bill Cran's series takes a somewhat different approach. We are in fact still amply supplied with oil on planet earth.

Power crime Introduction Despite making strides in scrutinizing crimes committed by economically and politically powerful actors, organizations, and even states, the field of criminology remains disproportionately preoccupied with socially vulnerable offenders involved in street crime. This observation is more than just a vague impression. Examinations of the major US and British journals of criminology and criminal justice reveal that a mere 3% of research articles focus on the criminal activities of corporations and governments [2]. This special issue offers more than just another round of discussion pertaining to so-called white collar criminals. By concentrating on what we call power crime, essays delve into the theoretical and conceptual underpinnings of grave breaches of domestic and international laws.

Aluna the Movie About the Movie ALUNA is being made by and with the KOGI, a genuine lost civilization hidden on an isolated triangular pyramid mountain in the Sierra Nevada de Santa Marta, Colombia, nearly five miles high, on the Colombian-Caribbean coast. The Kogi say that without thought, nothing could exist.