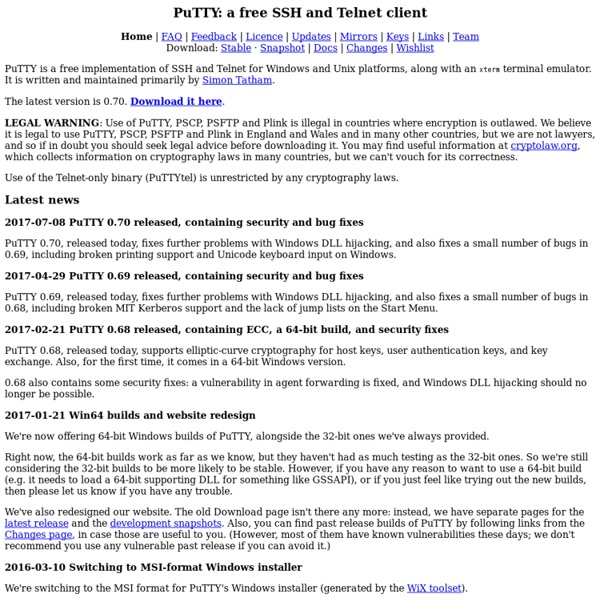 Nmap - Free Security Scanner For Network Exploration & Security Tera Term Open Source Project KiTTY - Welcome What is KiTTY ? KiTTY is a fork from version 0.62 of PuTTY, the best telnet / SSH client in the world. KiTTY is only designed for the Microsoft Windows platform. Why you want a Linux Live CD For the most part, on this blog, I try to convince readers to do something defensive on their computers - like a parent nagging a child to eat their vegetables. Only once have I put my foot down, so to speak, saying unequivocally last year that all Windows XP users should employ DropMyRights. Now, another emphatic endorsement - all Windows users should have a Linux Live CD, and, know how to use it. If you're not familiar with the term "Live" applied to a CD, that's because it's not something that exists in the Windows world. Linux can do something Windows can't, run (not just install) from a CD. You can run Linux off a Live CD even on a computer that doesn't have an internal hard disk.

Wireshark · Go deep. Penetration Testing Software mRemoteNG Checksum software Overview: Arpoon Checksum computes checksums of files. A checksum (message digest, hash value) is a kind of fingerprint that enables to uniquely identify a file or document. This can be used for authentication purposes or to track document modifications.

Netcat: the TCP/IP swiss army Remmina - The GTK+ Remote Desktop Client How to Create a Backup Image in Windows Vista and Windows XP September 12, 2007By Jason Ensinger In a perfect world creating a backup image would be useless. Even in the real world, full of viruses, hard drive failures, file corruption, and accidental deletions — you may never need to fall back on your backup. Cygwin