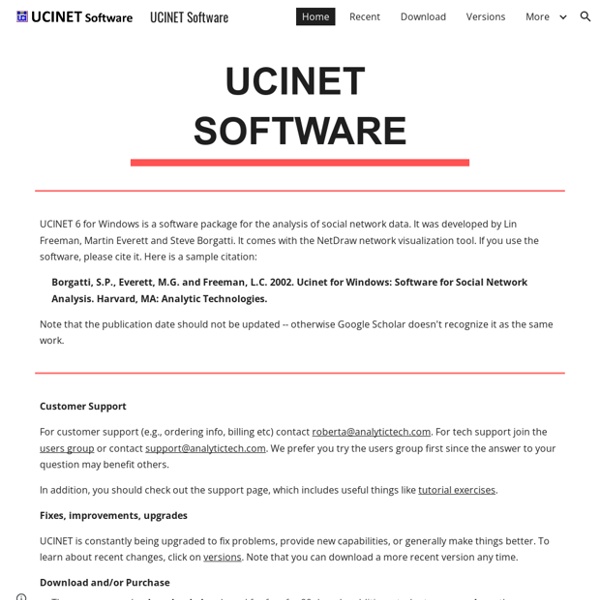 UCINET 6 for Windows is a software package for the analysis of social network data. It was developed by Lin Freeman, Martin Everett and Steve Borgatti. It comes with the NetDraw network visualization tool. If you use the software, please cite it. Here is a sample citation: Borgatti, S.P., Everett, M.G. and Freeman, L.C. 2002. Ucinet for Windows: Software for Social Network Analysis.

Introduction to Network Visualization with GEPHI New tutorial available! A completely new version of this tutorial has been published, with 2 complete and complementary datasets to learn and explore many basic and advanced features of Gephi: To the new tutorial Gephi workshop at University of Bern (photo Radu Suciu) Social Network Analysis is a lens, a way of looking at reality. (Claire Lemercier at Swiss Digital Humanities Summer School 2013) Network Analysis appears to be an interesting tool to give the researcher the ability to see its data from a new angle. Free Mind Mapping Software, Freeware, Create mindmaps for brainstorming, problem solving, rational analysis, and decision marking. Free mind map software help you build, save, share and print arbitrary mind maps absolutely free. Edraw Mind Map is a free mind map freeware with rich examples and templates which make it easy to create mind maps, brain-storming diagrams, project timeline, life planner, SWOT analysis and sketch maps. It can visualize your thinking and quickly arrange and organize your work, all to benefit you as well as people around you. Click to View Video: Edraw Mind Map in 2 Minutes. Why Choose Edraw Mind Map Smart drawing guide helps to layout the mind map shapes automatically.

What Does A Map Of The Internet Look Like? Internet-map.net It can be tough to visualize the internet. Web traffic companies like Alexa do a good job of showing the relative ranking of websites, but what about the connections between websites? Free Tools to Visualize Your Data Data visualization has grown in popularity as datasets have become larger and tools have become more user-friendly. This area is eagerly being explored by researchers in a variety of disciplines. Although many people think of numbers when they consider types of data, data comes in many forms–including text! In fact, for many researchers, especially those in the humanities or social sciences, text is their primary data source. This example of a network visualization could be created using a tool like Gephi or Sci2. Image: Clickstream Data Yields High-Resolution Maps of Science.

Post-truth politics - Wikipedia Post-truth politics (also called post-factual politics) is a political culture in which debate is framed largely by appeals to emotion disconnected from the details of policy, and by the repeated assertion of talking points to which factual rebuttals are ignored. Post-truth differs from traditional contesting and falsifying of truth by rendering it of "secondary" importance. While this has been described as a contemporary problem, there is a possibility that it has long been a part of political life, but was less notable before the advent of the Internet. In the novel Nineteen Eighty-Four, George Orwell cast a world in which the state changes historic records daily to fit its propaganda goals of the day. History[edit]

ToolGoogleNewsScraper Scrapes Google News. Instructions The scraper batch queries news.google.com, outputting a table of returns including URL, title, source, city/country, date and teaser text. Enter a project name for the results file. 72 Hours of #Gamergate — The Message The Breakdown Most of the posting activity to #Gamergate and #NotYourShield is retweets. (From here on, I’ll refer to both hashtags as just “#Gamergate” for readability’s sake.) Cytoscape: Hands-down Winner for Large-scale Graph Visualization I still never cease to be amazed at how wonderful and powerful tools are so often and easily overlooked. The most recent example is Cytoscape, a winner in our recent review of more than 25 tools for large-scale RDF graph visualization. We began this review because the UMBEL subject concept “backbone” ontology will involve literally thousands of concepts. Graph visualization software suitable to very large graphs would aid UMBEL’s construction and refinement. Cytoscape describes itself as a bioinformatics software platform for visualizing molecular interaction networks and integrating these interactions with gene expression profiles and other state data. Cytoscape is partially based on GINY and Piccolo, among other open-source toolkits.

Five reasons why Macron won the French election Image copyright AFP Emmanuel Macron has triggered a political earthquake in French politics. A year ago, he was a member of the government of one the most unpopular French presidents in history. Now, at 39, he has won France's presidential election, defeating first the mainstream centre left and centre right and now the far right as well. He got lucky No doubt about it, Mr Macron was carried to victory in part by the winds of fortune. Jigsaw - Visual Analytics for Investigative Analysis Summary Investigative analysts and researchers acquire clues and connect small bits of evidence to uncover larger plans, stories, or narratives, and to simply gain a better understanding of the information. Often, the individual bits of evidence are short text documents or spreadsheets, and analysts must examine large collections of such documents in order to "put the pieces together" and formulate a well-supported hypothesis about actions that may occur in the future. As the number of documents to examine rises, it becomes more and more challenging for analysts to understand the data and make judgments about it. We have created Jigsaw, a visual analytics system to help analysts and researchers better explore, analyze, and make sense of such document collections. Our specific objective is to help analysts reach more timely and accurate understandings of the larger stories and important concepts embedded throughout textual reports.

See how red tweeters and blue tweeters ignore each other on Ferguson After prosecutor Robert McCulloch announced the Ferguson grand jury’s decision not to indict Officer Darren Wilson for the shooting of Michael Brown, a night of clashes between police and protesters produced burning police cars, blocked highways, and automatic gunfire. Amid all the unrest, is it possible to get a clear look at some of the racial and political tensions that underlie the Ferguson conflict? I studied this question using a platform which has has played a major role throughout events in Ferguson: Twitter. Twitter has been used to disseminate live (and sometimes inaccurate) information about Ferguson, organize protests, and even to cyberattack the KKK.