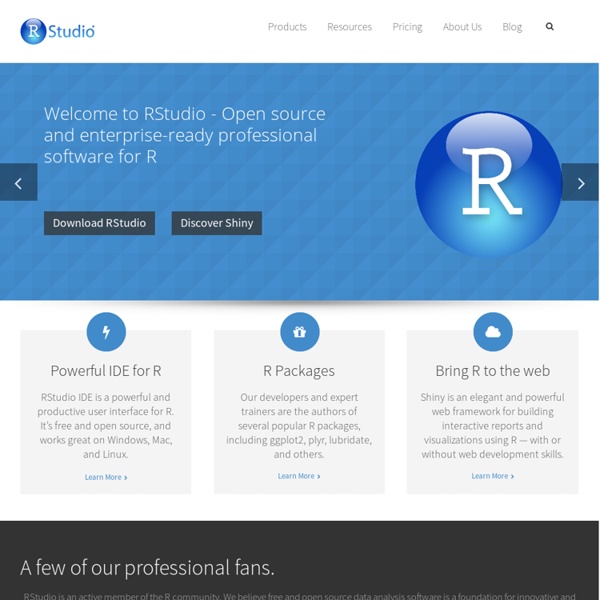 AWS Public Data Sets A data set containing Google Books n-gram corpora. This data set is freely available on Amazon S3 in a Hadoop friendly file format and is licensed under a Creative Commons Attribution 3.0 Unported License. The original dataset is available from

Creativity on the Run: 18 Apps that Support the Creative Process "The intuitive mind is a sacred gift, the rational mind is a faithful servant. We have created a society that honors the servant and has forgotten the gift." - Albert Einstein We do not need to teach creativity, but rather inspire its daily practice. Somewhere along the way, we simply forgot to honor this innate gift and how to access its power. Our role as educators is to encourage learning experiences that increase the ability to recognize and listen to our inner voice. What is R? During the last decade, the momentum coming from both academia and industry has lifted the R programming language to become the single most important tool for computational statistics, visualization and data science. Worldwide, millions of statisticians and data scientists use R to solve their most challenging problems in fields ranging from computational biology to quantitative marketing. R has become the most popular language for data science and an essential tool for Finance and analytics-driven companies such as Google, Facebook, and LinkedIn. Watch this 90 second video for an introduction to R

Exposing an online interface for MATLAB (and potentially any language) I was always interested in building a small cluster with my (old) computers for my research project (just like MATLAB Distributed Server or a Hadoop cluster). While MATLAB is one of the most mature platforms for scientific computing, it's also extremely expensive, so expensive that an Ivy League college determines to exclude MATLAB Distributed Server in its academic license. Therefore we have to build some simple (and possibly dirty) alternative for the MATLAB cluster. And the first step is to expose MATLAB to the external world with some network interface. Although MATLAB is able to invoke Java's socket library to provide some sort of interop-ability, designing a communication protocol and building everything from scratch is just a waste of time. With the intuition to make the interface both machine and human friendly, we determine to build it as an HTTP site with a simple user interface.

Kodu Game Lab - Microsoft Research FUSE Labs An overview of Kodu. (Click to play) Kodu lets kids create games on the PC and Xbox via a simple visual programming language. Data Repository List From Open Access Directory This list is part of the Open Access Directory. This is a list of repositories and databases for open data. Please annotate the entries to indicate the hosting organization, scope, licensing, and usage restrictions (if any). Finance: Stock market quotes, news, currency conversions & more Washington Post - 5 hours ago Keurig Green Mountain, a maker of single-serve coffee brewers, announced Monday it had agreed to be acquired for $13.9 billion in cash by a billionaire European family, which has been trying to consolidate and dominate the global market for coffee. Bloomberg - 4 hours ago China's exports fell for a fifth month while a slump in imports moderated, as policy makers seek to spur domestic spending amid tepid global demand.

Wolfram Programming Cloud: Introducing a Programming Revolution Combine and Conquer Because everything in the Wolfram Language is coherently built in, you can routinely combine functionality from vastly different areas, opening up a new level of programming and algorithm innovation. Insert Visualization Anywhere The Wolfram Language makes it trivial to insert aesthetically optimized static or dynamic visualization anywhere—bringing any aspect of your program to life. Leverage the World's Knowledge In the Wolfram Language, data and models from thousands of domains are built in, so your code can immediately know about and compute with real-world constructs.

RStudio ( which is a very nice front-end to R and works on all platforms. by raviii Jan 21