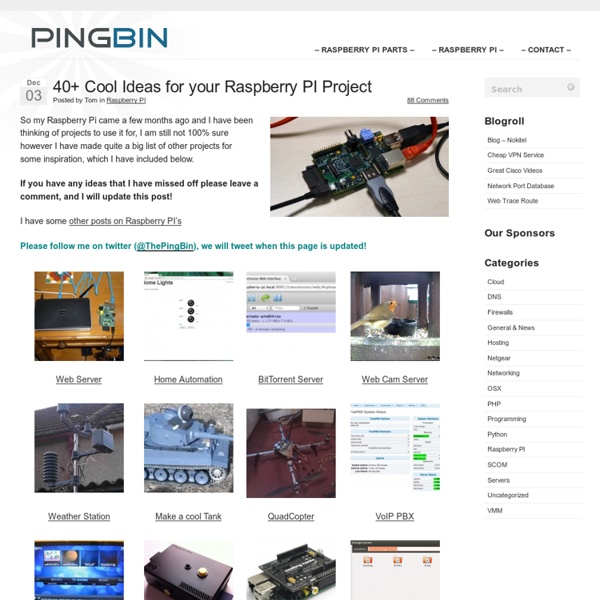 Lapse Pi – Motorised Time-lapse Rail with Raspberry Pi Here’s another article in the series of photography related DIY projects using the Raspberry Pi single board computer. This time it’s a Time Lapse rail. In this case, I think it’s OK to start with the results, so here’s a video of a few time-lapse sequence that I’ve put together over the last few weeks. Make sure you play it in full screen, and High Definition if possible! Backgroud Music by So, now that you’ve seen what it can do, here’s how it was done… Oh, by the way, there’s a lot of pictures, so to save load time I’ve split the post across a few pages.

Raspberry Pi Model B shipping with doubled RAM for same old $35 price Released back in February with the intention of “stimulating the teaching of basic computer science in schools”, the Raspberry Pi single-board computer has since ended up on the grubby hands of a lot of us old-timers too. And why wouldn’t it? What better tool to try your trembling, amateur programming hand on than a dirt-cheap $35 one? Still, the Raspberry Pi did have its fair share of downsides, starting with what wasn’t exactly a great hardware configuration. The 700MHz-clocked ARM11 processor and 256 MB of RAM looked insufficiently snappy for most Pi users, but fortunately both those specs have been upped, all while sticking to the initial unbeatable price of $35. 10 weird and wonderful Raspberry Pi hacks Necessity may be the mother of invention, but having a $35 Raspberry Pi computer helps too. In the time since the credit card-size Raspberry Pi went on sale last February, hardware hackers have customized the PC to be everything from a game console to a mini Linux laptop to a supercomputer. Sales have also skyrocketed, with an estimated one million PC hobbyists snatching one up. The UK-based Raspberry Pi Foundation says its machine has become a genuine phenomenon.

.Getting Your RPi Ready For C Programming – Raspberry Pi Projects C is a natural choice to program in on the Raspberry Pi. It's very powerful, usable on virtually all hardware platforms and really similar to lots of other programming languages such as Java, PHP, C# and objective C. As popular programming languages go its as powerful as it gets, with only assembler beating it in terms of programming to the bare metal of a hardware platform. Its also what Linux itself is written in. The notes on this site are largely focused on programming in C and C++ and we typically do this running on the Raspbian operating system. If you are a beginner don't worry about the distinction between C and C++ too much.

Attiny85 and RPI It is wellknown fact that you can use the Arduino as a frontend for the RPI. A simpler and cheaper solution is to use one of the tinys from Atmel, for example the Attiny85. An ATtiny 85 cost about 1-2 $, and no other components are neede. You can use many of the librarys allready developed for the ARduino. The Attiny has among other things 3 ADC pins you can use for analog inputs, like light sensors, temperature sensor, sound etc. You can use the Arduino IDE and a cheap USBasp programmer to program it, or you can use a Arduino with the ArduinoISP sketch loaded.

R-Pi NAS Back to RPi Guides. Raspberry Pi Network Attached Storage This project configures your Raspberry Pi to share files with any other computer on your local network. Raspberry Pi Rising: 7 Incredible Projects People Are Making With The Single Board Computer [VIDEO] In less than a year on the market (and just one month in the U.S.), the U.K.'s Raspberry Pi Foundation has sold more than 1 million units of its affordable credit card-size computer, the Raspberry Pi. After shifting production from China to Wales in September -- the Raspberry Pi Foundation uses Sony’s Pencoed factory to build the computer -- the U.K. plant has produced more than 500,000 Raspberry Pi units in a little more than six months, pumping out about 40,000 units each week from that facility alone. “In June, we scheduled 204 units per week.

Low Level Programming of the Raspberry Pi in C One of the things that disappointed me when I first got my Raspberry Pi was the fact that everybody was doing very high level programming with it. I wanted to program it like I used to do with microcontrollers, but it seemed like this was not as easy as I thought it would be. I believe however, that for embedded applications, you should be very cautious about dependencies, thus try to use as few libraries as possible. This article will show you how to program the Raspberry Pi in C code in a low level way. Tackling this can be a challenge, so let's get started! Wireless Raspberry Pi print server Wireless printing has made it possible to print to devices stored in cupboards, sheds and remote rooms. It has generally shaken up the whole process of printing and enabled output from smartphones, tablets, laptops and desktop computers alike. But you don’t have to own a shiny new printer for this to work; old printers without native wireless support don’t have to end up in the bin, thanks to the Raspberry Pi. The setup is simple. With your Raspberry Pi set up with a wireless USB dongle, you connect your printer to a spare USB port on the computer.

Pi-Face Interface for Raspberry Pi Allows you to control lights, motors etc. Sense inputs Creditcard size, stacks on top of Raspberry Pi Buffered to protect the Raspberry Pi Easy to connect with screw terminals Program in Scratch or Python Test with onscreen simulator Pi-Face Digital is the first of a range of interfaces to allow the Raspberry Pi to control and manipulate the real world. 12 Cool Projects For Your Raspberry Pi Raspberry Pi, the affordable, credit-card sized computer, has inspired tinkerers everywhere. Originally designed to get kids interested in computing, it has also developed a following among programmers looking for a smaller, cheaper medium for projects. See also: Raspberry Pi: Everything You Need To Know In our introduction to Raspberry Pi, we listed ten simple project tutorials for beginners.

Silverlight Developer » Blog Archive Bare Metal GPIO on the Raspberry Pi - Silverlight Developer The Raspberry Pi is classically used as a single board computer running Linux but it also offers the possibility of using the board without Linux (known as bare metal development). Add to this the availability of free ARM development tools and we have the opportunity to develop on a high speed ARM processor at a reasonable cost. This post explores the steps necessary to toggle a GPIO pin on the Raspberry Pi by directly accessing the registers without the presence of an operating system. Project Description For this simple project the software will need to perform three operations: Configure the GPIO portSet the GPIO pins for the selected portReset the GPIO pins for the selected port

Build a Wi-Fi Drone Disabler with Raspberry Pi Photo by Mike Senese Please note: The information presented here is for educational purposes. As with all guides covering network and computer security, the techniques should only be performed on devices that you own or have permission to operate on. This tutorial is designed to help users understand the security implications of using unprotected wireless communications by exploring its use in a popular drone model: the Parrot AR.Drone 2.0.