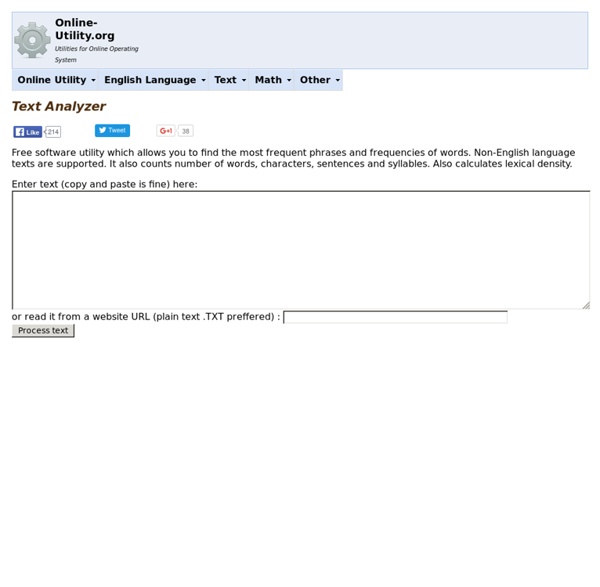 » Text Analysis with R for Students of Literature Matthew L. Jockers Text Analysis with R for Students of Literature provides a practical introduction to computational text analysis using the open source programming language R. Readers begin working with text right away and each chapter works through a new technique or process such that readers gain a broad exposure to core R procedures and a basic understanding of the possibilities of computational text analysis at both the micro and macro scale. View the Book Flyer [pdf 1.4MB] Introduction to the RStudio Programming Environment [Video]. “This is a well written book on the topic of Text Analysis. “This book is an essential resource for anyone who wants to study literature using computational methods.” “I can’t think of a more qualified person to guide readers through powerful R techniques for text analysis. “The open source programming language R has become one of the most central statistical and analytical tool in many sciences. Thanks to all of those below who provided comments and feedback.

Text Permutation Generator - Letter, Number, Word, Combinations Permutations will load here. Enter up to 10 objects to permute into the object fields above. Objects can be any text from a single letter to whole sentence. Permuted sets can have a prefix and/or suffix added via the prefix/suffix fields. NOTE: To generate combinations, with or without repetition, to a specific set length, use the Combination Generator. Statistical Methods for Studying Literature Using R R is a powerful programing language for statistical analysis and visualization that can be broadly used for many applications in the digital humanities. As with any programming language, getting started with R involves a steep initial learning curve in order to produce useful results. In its current form, this blog contains the notes from a hands-on workshop that I initially ran at the University of Kansas's Digital Humanities Forum/THATCamp Representing Knowledge in the Digital Humanities in September of 2011 and expanded with a more literary focus at the (University of Kansas 2012 Digital Humanities Forum). The examples are based on three different data sets. Next: Getting Started With R -->>

Stanford Literary Lab A Statistical Analysis of the Work of Bob Ross Bob Ross was a consummate teacher. He guided fans along as he painted “happy trees,” “almighty mountains” and “fluffy clouds” over the course of his 11-year television career on his PBS show, “The Joy of Painting.” In total, Ross painted 381 works on the show, relying on a distinct set of elements, scenes and themes, and thereby providing thousands of data points. I decided to use that data to teach something myself: the important statistical concepts of conditional probability and clustering, as well as a lesson on the limitations of data. So let’s perm out our hair and get ready to create some happy spreadsheets! More Culture What I found — through data analysis and an interview with one of Ross’s closest collaborators — was a body of work that was defined by consistency and a fundamentally personal ideal. I analyzed the data to find out exactly what Ross, who died in 1995, painted for more than a decade on TV. Conditional probability can be a bit tricky. What about footy little hills?

Laurence Anthony's Software FireAnt (Filter, Identify, Report, and Export Analysis Toolkit) is a freeware social media and data analysis toolkit with built-in visualization tools including time-series, geo-position (map), and network (graph) plotting. [FireAnt Homepage] [Screenshots] [Help] PayPal Donations and Patreon Supporters: Click one of the following if you want to make a small donation to support the future development of this tool.

Large-Scale Text Analysis with R - HILT 2015 Text mining, the practice of using computational and statistical analysis on large collections of digitized text, is becoming an increasingly important way of extracting meaning from writing. Whether working on survey data, medical records, political speeches or even digitized collections of historical writing, we are now able to use the power of computational algorithms to extract patterns from vast quantities of textual data. This technique gives us information we could never access by simply reading the texts. But determining which patterns have meaning and which answer key questions about our data is a difficult task, both conceptually and methodologically; particularly for those who work in the humanities who are able to benefit the most from these methods. Large-Scale Text Analysis with R will provide an introduction to the methods of text mining using the open source software Environment “R”. This course is 75% full (as of June 4, 2015).

Searching; Visualized: “The Book History Bibliograph” | McGill Digital Humanities Tagged with: collaboration, database, libraries, literary topology, text analysis, virtual environments Posted in Cultural Archives & Curation, Knowledge Environments, Major Projects, Projects, Research, Tools Research, Visualization With the increased interest in the material aspects of the book, the field of book history has seen rapid expansion in the past twenty years. An extremely broad area of research, the problem of finding sources in multiple languages and disciplines has been of continuing concern. “The Book History Bibliograph”, a bibliographic tool currently under development between Stanford and the University of Edinburgh, with input from McGill, proposes creative solutions to cross-disciplinary and multi-lingual searching. Under the direction of Dr. Currently in “beta”, the Bibliograph database contains about 500 sources; Dr. Book History Bibliograph PI: Tom Mole University of Edinburgh