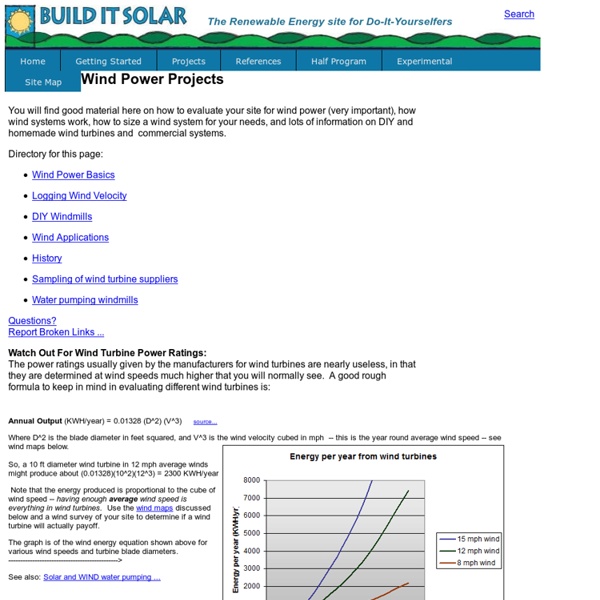 Annual Output (KWH/year) = 0.01328 (D^2) (V^3) source... Where D^2 is the blade diameter in feet squared, and V^3 is the wind velocity cubed in mph -- this is the year round average wind speed -- see wind maps below. So, a 10 ft diameter wind turbine in 12 mph average winds might produce about (0.01328)(10^2)(12^3) = 2300 KWH/year Note that the energy produced is proportional to the cube of wind speed -- having enough average wind speed is everything in wind turbines. Use the wind maps discussed below and a wind survey of your site to determine if a wind turbine will actually payoff. The graph is of the wind energy equation shown above for various wind speeds and turbine blade diameters See also: Solar and WIND water pumping ...

Wind Turbine Output Boosted 30% by Breakthrough Design Clean Power Published on April 29th, 2009 | by Timothy B. Hurst Passive structure design of “Wind Energizer” by Leviathan Energy reportedly increases wind turbine efficiency 30% in field tests. The 6 Most Badass Skills You Can Learn in Under a Week Become a Human Lie Detector Any secret agent worth his hidden cyanide pills is going to have to be prepared for intense negotiations. Whether you've captured a deadly SPECTRE double-agent working as an MI6 janitor, or are just buying a used car, you've got to be able to tell when the enemy is lying through his teeth to you, and how to best disguise the fact that you're lying through your teeth at the same time. Also you can be like that guy in Lie to Me, for the few of you who watch that show.

How I built an electricity producing wind turbine Several years ago I bought some remote property in Arizona. I am an astronomer and wanted a place to practice my hobby far away from the sky-wrecking light pollution found near cities of any real size. I found a great piece of property. The problem is, it's so remote that there is no electric service available. That's not really a problem. Make a Wind Generator Make: Projects With a motor and some piping, it’s easy to enjoy free energy forever. There are no limits to what you can do with wind power. It’s abundant, clean, cheap, and easy to harness. EWICON bladeless wind turbine generates electricity using charged water droplets Dutch researchers have developed the EWICON, a bladeless windmill with no moving parts that produces electricity by pushing charged water droplets into the wind Image Gallery (2 images) Wind energy may be one of the more sustainable sources of power available, but the spinning blades of conventional wind turbines require regular maintenance and have attracted criticism from bird lovers. That might explain why we've seen wind turbine prototypes that enclose the blades in a chamber or replace them entirely with a disc-like system.

Build this open source DIY wind turbine for $30 Getting started with home wind energy projects can set you back a pretty penny if you buy a finished product, but if you're a little bit handy and don't mind scrounging for materials and getting creative in the garage or backyard, you can try your hand at building one of these DIY wind turbines for about $30 in materials. After all, it is #iheartrenewables week! We've previously covered Daniel Connell's open source concentrated solar collector plans, but now he's back with another great DIY renewable energy project, a vertical axis wind turbine based on the Lenz2 lift+drag design. Connell's design calls for using aluminum lithographic offset printing plates to catch the wind, which he says can be obtained cheaply (or possibly even free) from an offset printing company, and a variety of hardware and a bicycle wheel. "The turbine uses the ~40% mechanically efficient Lenz2 lift+drag design.

HowStuffWorks &The Basics of C Programming& The previous discussion becomes a little clearer if you understand how memory addresses work in a computer's hardware. If you have not read it already, now would be a good time to read How Bits and Bytes Work to fully understand bits, bytes and words. All computers have memory, also known as RAM (random access memory). For example, your computer might have 16 or 32 or 64 megabytes of RAM installed right now. RAM holds the programs that your computer is currently running along with the data they are currently manipulating (their variables and data structures). Memory can be thought of simply as an array of bytes.

DIY wind turbine project goes open source If you live in an area that sees a fair amount of wind and you’d like to reduce your utility bill by harnessing some of that wind power, a wind turbine might be a good idea. The trouble with most commercially made home wind turbines, though, is that they’re fairly expensive, extremely tall and, if you have neighbors, they might not appreciate the new addition to the neighborhood. Washington state resident and do-it-your-selfer Make Marohn came up with an inventive alternative.

WWII veteran creates bird-friendly wind turbine Military veteran Raymond Green created the Catching Wind Power prototype at an estimated cost of US$550 Image Gallery (17 images) World War II veteran Raymond Green, an 89 year old resident of Jackson, California, has created a working prototype of a "bladeless" wind turbine which is bird and bat-friendly, and very quiet in operation. Though still in development at present, Green intends his design to be produced in various sizes, from smaller personal versions to much larger turbines which could be implemented in wind farms. View all The Compressed Air Enclosed Wind Turbine weighs 45 lb (20 kg) overall, while the turbine assembly itself measures 12 inches (30 cm) in diameter and the wind sock which surrounds it has a diameter of 31 inches (78 cm) at its widest point.

Philippe Starck's Stylish Wind Turbine For Your Yard In keeping with Philippe Starck's philosophy of creating practical objects with a sense of aesthetics and functionality, the designer has created a couple chic wind turbines, named Revolutionair. The hip French designer first unveiled his sketches in 2008, working with Italian generator company Pramac to make them a reality. This sleek look offers another image of the classic three-blade turbine we've come to love - and some hate. Ask Hackaday: Who Wants An All DC House? Sometimes when working on a righteous hack, we get goosebumps while watching our code execute faster than we could ever possibly comprehend. Seeing the pixels of the LCD come alive, hearing the chatter of relays and the hum of fans…it’s an amazing thing what electricity can do. And it is equally amazing when you realize that it all started one hundred and thirty five years ago, when [Thomas Edison] changed the world forever with the first practical electric light bulb.

The Sky Is the Limit for Wind Power Wind turbines on land and offshore could readily provide more than four times the power that the world as a whole currently uses. Throw in kites or robot aircraft generating electricity from sky-high winds and the world could physically extract roughly 100 times more power than presently employed—and the climatic consequences remain minimal. Two new computer-model analyses suggest there are few limits to the wind's potential. Although "there are physical limits to the amount of power that can be harvested from winds, these limits are well above total global energy demand," explains climate-modeler Kate Marvel of Lawrence Livermore National Laboratory, who led the analysis published September 9 in Nature Climate Change. (Scientific American is part of Nature Publishing Group.) Current global demand is roughly 18 terawatts.

'Wind trees' could replace controversial giant turbines in race for sustainable energy An artificial 'wind tree' has been created to generate electricity from even the slightest flow of air. Jérôme Michaud-Larivière, founder of the Paris-based start-up NewWind, has created Tree Wind and plans to market the invention next year. The eight-metre high (25ft) tree consists of a steel trunk, from which extend branches holding 100 plastic 'leaves', AFP reports. "The idea came to me in a square where I saw the leaves tremble when there was not a breath of air." Michaud-Lariviere said he realised that energy had to come from somewhere, and that it must be able to be transferred into watts.