Using Whips & Chains to Heal Chronic Pain. {Adult} Via Jamie Rautenbergon Nov 22, 2014 I spent the summer of 2008 managing shifts at a prominent S and M club in downtown Manhattan. 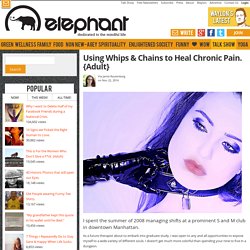 As a future therapist about to embark into graduate study, I was open to any and all opportunities to expose myself to a wide variety of different souls. I doesn’t get much more colorful than spending your nine to five in a dungeon. What I didn’t realize then was the way this experience would inform my own recovery from chronic pain and chronic illness.

Despite what the noises lead me to believe, once I entered the back office it was surprisingly normal. The service we provided was simply out of the realm of what’s considered daytime talk. It’s not the “what” of the club and the specific fetishes that intrigued me, it was the “why.” I longed to understand my fascination because once we understand something, we cease to judge it. And so, I began my studies in the world of Bondage, Discipline, Sadism & Masochism (BDSM). It’s a highly intimate process. Photo: flickr. A New Normal: Ten Things I've Learned About Trauma - Catherine Woodiwiss. I wasn’t really expecting painful things to happen to me. 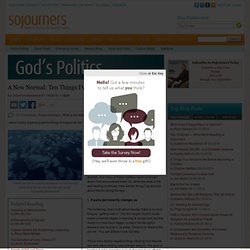 Trauma can be an isolating experience. It's only through relationship that we can be most fully healed. Lightspring/Shutterstock Take Action on This Issue Circle of Protection for a Moral Budget A pledge by church leaders from diverse theological and political beliefs who have come together to form a Circle of Protection around programs that serve the most vulnerable in our nation and around the world.

I knew that pain was a part of life, but — thanks in part to a peculiar blend of “God-has-a-plan” Southern roots, a suburban “Midwestern nice” upbringing, and a higher education in New England stoicism — I managed to skate by for quite some time without having to experience it. After a handful of traumas in the last five years, things look different now. 1. This is the big, scary truth about trauma: there is no such thing as “getting over it.” This is not a wholly negative thing. 2. 3.

It is true that healing happens with time. 4. 5. Betrayal trauma and expectation. Agression & PTSD. Below are many references to the fact that lithium is helpful for aggression, irritability and violent behavior. 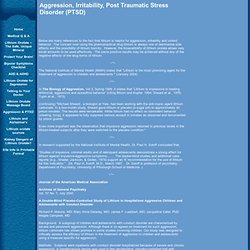 The concern over using the pharmaceutical drug lithium is always one of detrimental side effects and the possibility of lithium toxicity. However, the bioavailibility of lithium orotate allows very small amounts to be used effectively. The same positive results may be achieved without any of the negative effects of the drug forms of lithium. The National Institute of Mental Health (NIMH) states that “Lithium is the most promising agent for the treatment of aggression in children and adolescents. " (January 2004) In The Biology of Aggression, Vol 3, Spring 1999, it states that “Lithium is impressive in treating antisocial, aggressive and assaultive behavior” (citing Bloom and Kupfer, 1994; Sheard et al., 1976; Tupin et al., 1973).

In research supported by the National Institute of Mental Health, Dr. Journal of the American Medical Association Archives of General Psychiatry. Stressors -Gabor Mate. Mental Illness and the Family. **Updated Nov. 28 2012** (My brother called to inform me that he had been diagnosed with Bi-Polar Disorder not Borderline Personality Disorder as I had previously mentioned. 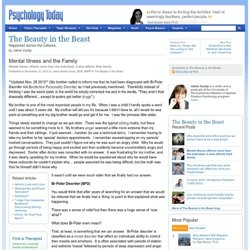 Thankfully instead of thinking I was the worst sister in the world he simply corrected me and in his words, "They aren't that drasically different....except bi-polars get better drugs ".) My brother is one of the most important people in my life. When I was a child I hardly spoke a word until I was about 3 years old. My mother will tell you it’s because I didn’t have to, all I would do was point at something and my big brother would go and get it for me.

I was the princess little sister. Things slowly started to change as we got older. It wasn’t until we were much older that we finally had our answer. You would think that after years of searching for an answer that we would be relieved that we finally had a ‘thing’ to point to that explained what was happening. What does Bi-Polar even mean? The DSM IV states: