Avant Garde Innovations. Dragonfly wind turbine aims to blend in, produce power in low wind conditions. Wind turbines can offer viable renewable power generation for a cleaner energy future, but the most efficient of them are not suited to any type of urban or small scale installations, so for many of us, they are at least one step removed from our daily lives. 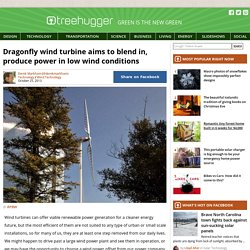 We might happen to drive past a large wind power plant and see them in operation, or we may have the opportunity to choose a wind power offset from our power company, but that's probably about as close as we get. Sales - The Archimedes. Thank you for your interest in our product| Dank u voor uw interesse in ons product Detail information | CustomersFor purchase information we kindly request you to select the agent / distributor in your country from the list below. 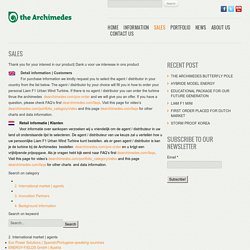 Search on category Search on keyword The windmill can’t be ordered at The Archimedes itself. No agent | distributor in your area yet? Silent Rooftop Wind Turbines Could Generate Half of a Household's Energy Needs. © Michael VanNederveen Photography via The Archimedes By Megan Treacy | Tree Hugger Small wind turbines scaled to the right size for residential and urban areas have so far lived in the shadows of their larger wind-farm-sized counterparts. 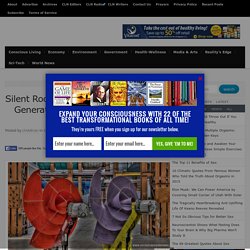 The power output has been too low for a reasonable return on investment through energy savings and the noise they produce is louder than most homeowners can deal with. Vortex Bladeless: a wind generator without blades. What is your swept area? 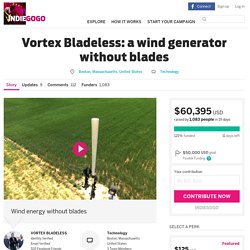 Our working area is a circular area around the tipping point of the equipment. People often confuse the swept areas of Vortex and that of a HAWT, but keep in mind that our equipment relies on oscillation, not on the rotation of the blades, so our swept area has a different shape – it’s a triangle rather than a circle. We need to be much higher to have the same swept area, in fact, it is almost twice as high. Though, keep in mind that the normalized cost of energy (LCOE) of the same swept are will be 40% less expensive.

To scale the equipment, you need to increase the height. What is your oscillation range? Radius of oscillation equals the diameter of Vortex at its top end. New Bladeless Turbine Design Could Revolutionize Wind Power. Image Credit: vortexbladeless.com A new project currently seeking crowd-funding called Vortex Bladeless is hoping to revamp wind turbine technology by creating a bladeless wind turbine that uses an entirely new concept to harness wind power. 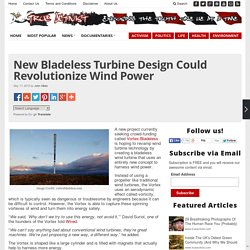 Instead of using a propeller like traditional wind turbines, the Vortex uses an aerodynamic effect called vorticity, which is typically seen as dangerous or troublesome by engineers because it can be difficult to control. However, the Vortex is able to capture these spinning vortexes of wind and turn them into energy safely. “We said, ‘Why don’t we try to use this energy, not avoid it,’” David Suriol, one of the founders of the Vortex told Wired. “We can’t say anything bad about conventional wind turbines; they’re great machines. Clean Energy Wind Turbines Installed On The Eiffel Tower. Image Credit: Inhabitat Urban Green Energy, a clean energy company, has recently installed wind turbines onto the Eiffel Tower. 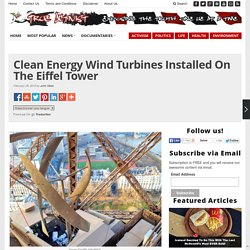 The turbines are small and barely generate enough energy to power the building itself, but representatives with Urban Green Energy say that this is a symbolic installation to promote clean energy. “The Eiffel Tower is arguably the most renowned architectural icon in the world, and we are proud that our advanced technology was chosen as the Tower commits to a more sustainable future. When visitors from around the world see the wind turbines, we get one step closer to a world powered by clean and reliable renewable energy,” Nick Blitterswyk, CEO of UGE said in a press release. The turbines are located 400 feet above the ground for maximum energy output, and are able to produce 10,000kWh of electricity annually.

New “Wind Tree” Generates Wind Power Silently In Tight Spaces! Image Credit: NewwindTV One of the arguments often used against harnessing wind power is the idea that the equipment needed takes up too much space. 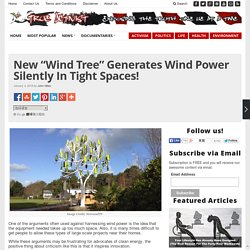 Also, it is many times difficult to get people to allow these types of large scale projects near their homes. While these arguments may be frustrating for advocates of clean energy, the positive thing about criticism like this is that it inspires innovation. Invention. New invention gives hope to dry regions Image Credit: eolewater.com By John Vibes, True Activist. 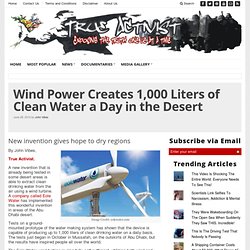 A new invention that is already being tested in some desert areas is able to extract clean drinking water from the air using a wind turbine. A company called Eole Water has implemented this wonderful invention in areas of the Abu Dhabi desert.