About the EU. An official website of the European UnionAn official EU websiteHow do you know? 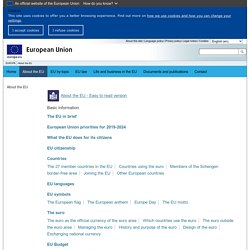 All official European Union website addresses are in the europa.eu domain. See all EU institutions and bodies Cookies This site uses cookies to offer you a better browsing experience. Find out more on how we use cookies and how you can change your settings. Skip to main content European Union Europa About the EU Home About the EU EU Login About the EU - Easy to read version Basic information Institutions, bodies and agencies Work for and with the EU Downloads The General Report on the Activities of the European Union The European Union - What it is and what it does Europe in 12 lessons Back to top Give feedback about this website or report a problem.

Europe nutshell es. State, Country, and Nation. By Liz Olson There is a difference between the terms nation, state, and country, even though the words are often used interchangeably. 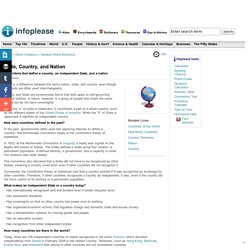 Country and State are synonymous terms that both apply to self-governing political entities. A nation, however, is a group of people who share the same culture but do not have sovereignty. When the “s” of state is lowercase, it constitutes a part of a whole country, such as the different states of the United States of America. When the “S” of State is uppercase it signifies an independent country. How were countries defined in the past? In the past, governments often used two opposing theories to define a country—the Montevideo Convention treaty or the constitutive theory of statehood. In 1933, at the Montevideo Convention in Uruguay, a treaty was signed on the Rights and Duties of States. The convention also declared that a State did not have to be recognized by other States, meaning a country could exist even if other countries did not recognize it. Selection of EU maps. Geographic maps of Europe, the EU and the candidate countries (before 2016) The series presents different historical geographical maps of Europe, the European Union and the candidate countries. 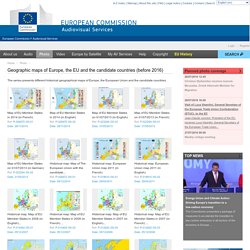 Part VIII Territorial Organization of the State [Spain/Constitution] CHAPTER I General Principles Section 137 The State is organized territorially into municipalities, provinces and the Self-governing Communities that may be constituted. 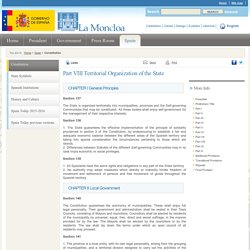 All these bodies shall enjoy self-government for the management of their respective interests. Section 138 1. Section 139 1. CHAPTER II Local Government Section 140 The Constitution guarantees the autonomy of municipalities. Section 141 1. Local treasuries must have sufficient funds available in order to perform the tasks assigned by law to the respective Corporations, and shall mainly be financed by their own taxation as well as by their share of State taxes and those of Self-governing Communities. CHAPTER III Self-governing Communities Section 143 1.

Section 144 The Cortes Generales may, in the national interest, and by an organic act: Section 145 1. Section 146 Section 147 1. 3. Section 148 1. 2. Section 149 1. 2. Section 150 1. Section 151. Spain: Autonomous Communities, Provinces, Cities, Municipalities - Population Statistics in Maps and Charts. Communism. Communism is a theory and system of social and political organization that dominated much of the history of the 20th century. 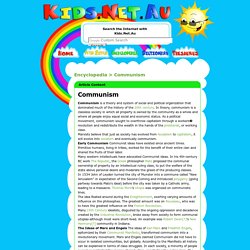 In theory, communism is a classless society in which all property is owned by the community as a whole and where all people enjoy equal social and economic status. As a political movement, communism sought to overthrow capitalism through a workers revolution and redistribute the wealth in the hands of the proletariat, or working class. Marxists believe that just as society has evolved from feudalism to capitalism, it will evolve into socialism and eventually communism. Early Communism Communist ideas have existed since ancient times. Primitive humans, living in tribes, worked for the benefit of their entire clan and shared the fruits of their labor.

Many western intellectuals have advocated Communist ideas. The idea floated around during the Enlightenment, exerting varying amounts of influence on the philosophes. See also: