Sign Up. Inside Amazon: Wrestling Big Ideas in a Bruising Workplace. Many women at Amazon attribute its gender gap — unlike Facebook, Google or Walmart, it does not currently have a single woman on its top leadership team — to its competition-and-elimination system. Several former high-level female executives, and other women participating in a recent internal Amazon online discussion that was shared with The New York Times, said they believed that some of the leadership principles worked to their disadvantage. They said they could lose out in promotions because of intangible criteria like “earn trust” (principle No. 10) or the emphasis on disagreeing with colleagues. Being too forceful, they said, can be particularly hazardous for women in the workplace. Motherhood can also be a liability. Michelle Williamson, a 41-year-old parent of three who helped build Amazon’s restaurant supply business, said her boss, Shahrul Ladue, had told her that raising children would most likely prevent her from success at a higher level because of the long hours required.

Workaholics on the wagon. Flexible working extended to all employees in UK. Nick Clegg: 'It’s about time we brought working practices bang up to date with the needs, and choices, of our modern families.' Photograph: Danny Lawson/PA Millions of employees will have the right to request flexible working from Monday under new measures the government believes will particularly benefit older people. 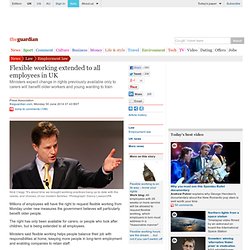 The right has only been available for carers, or people who look after children, but is being extended to all employees. Sleeping on the job: are working hours damaging health and performance? Sleep has a huge effect on health and productivity - are changing working patterns leading to burnout? 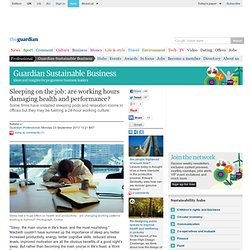 Photograph: Corbis "Sleep, the main course in life's feast, and the most nourishing. " Macbeth couldn't have summed up the importance of sleep any better. Increased productivity, energy, better cognitive skills, reduced stress levels, improved motivation are all the obvious benefits of a good night's sleep. But rather than becoming the main course in life's feast, a Work Foundation report suggests that the rise of online commerce and services is forcing patterns of work to change, hence dictating our sleep. According to the National Sleep Foundation, people in Japan and the US have the least amount of sleep. It appears employers are wising up to the significance of sleep. There is scientific evidence for the benefits of snoozing. However, Dr Kevin Morgan from Loughborough University's sleep research centre is sceptical about afternoon or daytime naps. Six ways to stop working long hours. The anonymous civil servant who wrote recently that some Whitehall employees are not pulling their weight is confusing the number of hours worked with effectiveness. 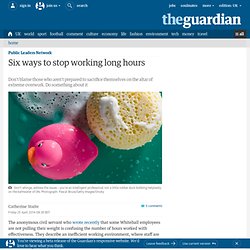 They describe an inefficient working environment, where staff are too busy going to meetings to do any real work. What are the meetings for? To avoid making decisions? To create a sense of busyness? To feed the self-importance of the higher-ups? This can become an entrenched pattern of time-wasting. So, rather than blaming those who aren't prepared to sacrifice themselves on the altar of extreme overwork, it would be more constructive to think about the changes which would enable everyone to get their work done in normal hours. 1. 2. 3. 4.

Flexible working hours are the dream … but not if you can't switch off. You lucky people. 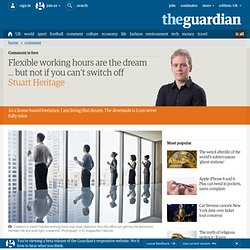 This is the week you've always waited for. The week when everything changes. No longer will you be a feckless office drone, exhausted from rush-hour commuting and distracted by the woman who sits next to you and who won't stop breathing through her mouth. Flexible working is here, and it means you get to become a person again. If you want to work part-time, or in different shifts, or do your job from home, from this week you're allowed to ask your employer for exactly that. I'm here to tell you that it is. I get to do what I like, how I like, whenever I like. Working hours: A plea for more data. Working hours: Get a life. How to get yourself a better work-life balance - Spend & Save - Money.

"I'm really pleased I made this move as it's worked out really well," she says. 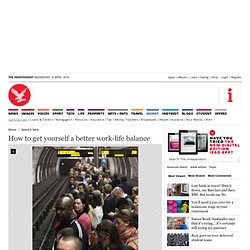 "It took me a long time to pluck up the courage to become self-employed and give up the security of knowing what you'll take home each month, but it has come with a lot of benefits. " These positives include the freedom to plan the working day, not having to join the early morning commuters, getting to spend more time with her children – Olly, six, and two-year-old Thomas – and earning money to help bolster the family finances. "Being a parent is the biggest guilt trip you can have when your children are ill," says Jackie, from Bexhill, East Sussex. "If you take time off work you feel guilty for not being there, and if someone else looks after them then you feel guilty about not spending time with them!

" "Recruitment is a very difficult job to do three days a week because things are happening all the time," she explains. It has also added another dimension to her day. The options.