The Best and Worst Days of the Week to Play a Show. Punk outfit Ultraje at Club 77 in San Juan, Puerto Rico. 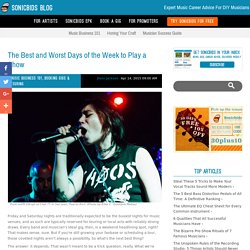 (Photo by Elías C. Quintana Matias) Friday and Saturday nights are traditionally expected to be the busiest nights for music venues, and as such are typically reserved for touring or local acts with reliably strong draws. Every band and musician's ideal gig, then, is a weekend headlining spot, right? That makes sense, sure. The answer: it depends. 1. Sunday to Wednesday: These are commonly seen as slow nights, but that's not always true. Electronic Press Kit. The Best Way to Approach a Venue for a Gig. Terminal West in Atlanta, GA. 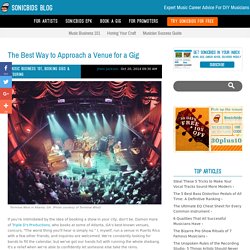 (Photo courtesy of Terminal West) If you're intimidated by the idea of booking a show in your city, don't be. Damon Hare of Triple D's Productions, who books at some of Atlanta, GA's best-known venues, concurs, "The worst thing you'll hear is simply no.” I, myself, run a venue in Puerto Rico with a few other friends, and inquiries are welcomed. Musicians' Checklist: 23 Little Things That Will Help You Nail Your Next Gig. Image via takelessons.com This article originally appeared on TakeLessons. 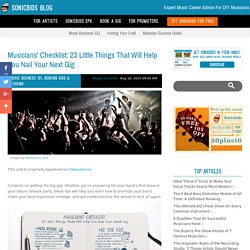 Congrats on getting the big gig! Whether you're preparing for your band's first show or your album release party, these tips will help you learn how to promote your band, make your best impression onstage, and get invited back to the venue to do it all again. One week before (at least) Put up posters around town. The day before Double-check your gear. The day of Banish your stage fright with a calming activity. At the gig Be there on time. The day after. A Graphic Designer's Top Tips for Creating an Eye-Catching Gig Poster. Two of the author's posters hang in the window of a local music store in Wilmington, NC. 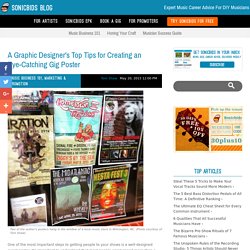 (Photo courtesy of Tom Shaw) How to Create a Facebook Event Invite People Want to RSVP 'Yes' To. The result of a poorly created Facebook event invite: an empty house. 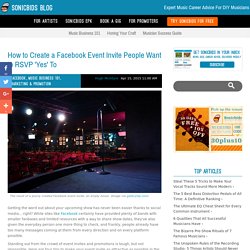 (Image via galleryhip.com) Getting the word out about your upcoming show has never been easier thanks to social media... right? While sites like Facebook certainly have provided plenty of bands with smaller fanbases and limited resources with a way to share show dates, they've also given the everyday person one more thing to check, and frankly, people already have too many messages coming at them from every direction and on every platform possible. Standing out from the crowd of event invites and promotions is tough, but not impossible. Here are four tips to make your event invite as attractive as possible in the hopes that it'll convince more people to attend your show. 1.

This is one thing that people so often overlook, and it could completely change your head count at your show or event. 2. Top 3 Reasons Why You're Not Getting the Gig. How to Persuade People to Come to Your Show on a Weeknight. Image via davidqchong.com Any band that's toured at least once knows that attendance at shows varies not only city by city, but also day by day. 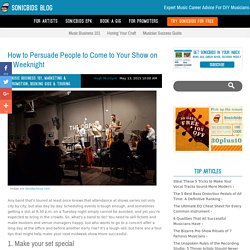 Scheduling events is tough enough, and sometimes getting a slot at 9:30 p.m. on a Tuesday night simply cannot be avoided, and yet you're expected to bring in the crowds. The Essential Gig Checklist: Are You Actually Ready to Perform? So you’ve picked up an instrument or you sing, and you’ve decided try and get good at something truly worthwhile. 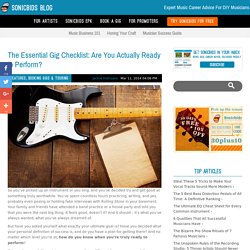 You’ve spent countless hours practicing, writing, and yes, probably even posing or holding fake interviews with Rolling Stone in your basement. Your family and friends have attended a band practice or a house party and told you that you were the next big thing. It feels good, doesn’t it? And it should – it’s what you’ve always wanted, what you’ve always dreamed of. But have you asked yourself what exactly your ultimate goal is?

Being a “successful” musician means something different for everyone, and there are many different levels at which it can manifest. YEAH for the first four, OUCH for the last one! After being a venue manager and talent buyer/booking agent for over 15 years in a major market, I can honestly tell you that bands fall in all five of those categories – and sometimes in the wrong ones. 6 Common Questions About Booking, Answered by a Venue Owner. Image via seymourduncan.com Musicians who are new to booking their own gigs should first start by learning about booking – rather than, say, blindly contacting local clubs with requests to play "whenever possible. 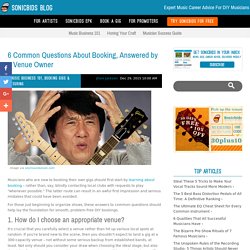 " The latter route can result in an awful first impression and serious mistakes that could have been avoided. For those just beginning to organize shows, these answers to common questions should help lay the foundation for smooth, problem-free DIY bookings. 1. How do I choose an appropriate venue? The Beginner's Guide to Booking Gigs: A Step-by-Step Timeline. Image via bookmygigs.com Booking a gig can be daunting for beginners. 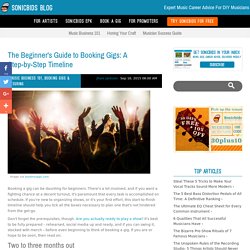