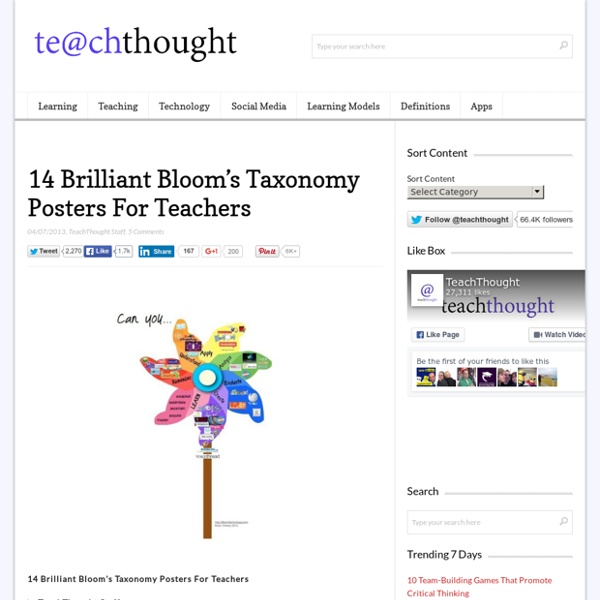 14 Brilliant Bloom’s Taxonomy Posters For Teachers by TeachThought Staff Bloom’s Taxonomy is a useful tool for assessment design, but using it only for that function is like using a race car to go to the grocery–a huge waste of potential. In an upcoming post we’re going to look at better use of Bloom’s taxonomy in the classroom, but during research for that post it became interesting how many variations there are of the original work. While a handful of the charts below only show aesthetic changes compared to others, most are concept maps of sorts–with graphic design that signifies extended function (power verbs), detail (clear explanations), or features of some sort (Bloom’s Taxonomy tasks by level). The follow simple, student-centered Bloom’s graphics were created by helloliteracy! The following “Bloom’s pinwheel” comes from Kelly Tenkley and ilearntechnology.com:

Global cities of the future: An interactive map - McKinsey Quarterly - Economic Studies - Productivity & Performance Over the next 13 years, 600 cities will account for nearly 65 percent of global GDP growth. Which of them will contribute the largest number of children or elderly to the world’s population? Which will rank among the top 25 cities by per capita GDP? Mooc creators criticise courses’ lack of creativity Original vision lost in scramble for profit and repackaging of old ideas, say pair Source: Stephen Downes Look what they’ve done to my Mooc: ‘as deployed by commercial providers they resemble television shows or digital textbooks with – at best – an online quiz component,’ argues Stephen Downes When The New York Times declared 2012 the “Year of the Mooc”, you would have been forgiven for thinking that the term – which stands for “massive open online course” – had been coined some time that year.

A dozen public accounting ideas that don't work anymore I recently heard an excellent sermon on the importance of letting go of the past so that we can each pursue our intended future. The speaker referred to a book by Robin Meyers in which he asserts that there may be an eighth deadly sin: nostalgia. From what I gathered, Meyers suggests that we go astray when we believe that “the vices of the present prove not only that all is now in disarray but that this ‘awful’ age is inherently inferior to some golden age that came before it.” When I heard these assertions, I was overwhelmed because they crystalized an issue that seems to plague so many CPA firm leaders: an attachment to some bygone “good old days” that might not have even been that good. When we focus on what’s “wrong with today’s (fill in the blank),” it allows us to delay making the significant—almost radical—changes needed to address modern realities and embrace a future when things will be very different. Wanting to retain the ability to be “right” and make the new way “wrong.”

How To Install Opigno on Debian 7 with Git and Drush An Article From Opigno Submitted by Wouter Admiraal Introduction Opigno is a new, fast growing e-learning platform based on the battle-hardened Drupal framework. Setting up Opigno via sFTP is pretty easy, but as you now have your own VPS, we should set it up using GIT and Drush. Set up your VPS 100 Report Card Comments It's report card time and you face the prospect of writing constructive, insightful, and original comments on a couple dozen report cards or more. A daunting task? Not with Ed World's help! Included: 100 positive report card comments for you to use and adapt. You've reached the end of another grading period, and what could be more daunting than the task of composing insightful, original, and unique comments about every child in your class? The following positive statements will help you tailor your comments to specific children and highlight their strengths.

Robots Aren't the Problem: It's Us - The Chronicle Review By Richard Florida Swikar Patel for The Chronicle Review Everyone has an opinion about technology. Depending on whom you ask, it will either: a) Liberate us from the drudgery of everyday life, rescue us from disease and hardship, and enable the unimagined flourishing of human civilization; or b) Take away our jobs, leave us broke, purposeless, and miserable, and cause civilization as we know it to collapse. The first strand of thinking reflects "techno-utopianism"—the conviction that technology paves a clear and unyielding path to progress and the good life.

Document and Examples - by the Ionic Framework Team - by the Ionic Framework Team Overview ngCordova was built to help make app development faster and more efficient than ever before. It gives you simple AngularJS wrappers for the most popular Cordova and PhoneGap plugins available, where you can take a picture, scan a barcode, upload a file, turn on your flashlight, get your current location, and much more with just a few lines of code. Install You can use bower to install ngCordova like so or download the zip file here, and locate the .js file in the dist folder $ bower install ngCordova

Overloaded Circuits: Why Smart People Underperform Ebook indicates that you would like to purchase and download a digital book in PDF, ePub, and Mobi formats. Hardcopy indicates that you would like to have "hardcopies" shipped from our warehouse to your requested shipping location. PDF indicates that you would like to purchase and download a single copy (digital) PDF file. Note: Some of our products are available in different languages, for example a "Spanish PDF" format means you will receive a PDF in the Spanish language. 7 Ways to Close the "Value Gap" on Customer Service By Tom Barrett, CIC, AAI The trends that began in 2013, with carriers tightening appointment criteria, looking at profitability first and foremost, requiring us to sell multiple lines of coverage (e.g., auto with home), and reductions in commission continue into the second quarter of 2014. The pressure on the independent agent, as outlined in the McKinsey Report in 2013, is but one of the many indicators. Even though some refuse to admit it, insurance distribution is rapidly changing. There are two main reasons for this: The quiet movement on the part of some carriers to create a direct sales force (without you, the agent) to write small business, as they have done in personal lines.

visual The Startup Universe displays and explores the relationships between startup companies and their founders and investors (Venture Capitalists) since 1990. Startups are grouped into 19 categories, based on the type of products or services they deliver. Each category is represented by an unique color. Web 2.0 to support the nets Web Tools that support this standard •Gizmos ExploreLearning currently has over 450 Gizmos with accompanying curricular materials, all with the aim of sharing the “Ah-Hah!” moment with teachers and students. Engelsk - Nasjonal digital læringsarena Football Hooliganism Hooliganism is unruly and destructive behaviour most often associated with football. It is an increasing problem in many countries. In this text we take a brief look at the problem. Animation Library