Silver Water - Beyond the Couch: The Online Journal of the MNCOP. Silver Water By Amy Bloom From her collection Come to Me (Harper Collins, 1993, pp. 87-98) Copyright © 1993 by Amy Bloom Used by permission of HarperCollins Publisher My sister’s voice was like mountain water in a silver pitcher; the clear blue beauty of it cools you and lifts you up beyond your heat, beyond your body. 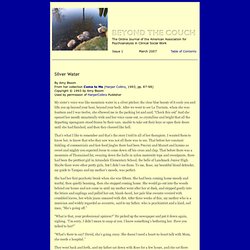 After we went to see La Traviata, when she was fourteen and I was twelve, she elbowed me in the parking lot and said, “Check this out” And she opened her mouth unnaturally wide and her voice came out, so crystalline and bright that all the departing operagoers stood frozen by their cars, unable to take out their keys or open their doors until she had finished, and then they cheered like hell. That’s what I like to remember and that’s the story I told to all of her therapists. I wanted them to know her, to know that who they saw was not all there was to see.

She had her first psychotic break when she was fifteen. “What is that, your professional opinion?” You never will.” Selected Shorts: The Power of Love. Gerretal.pdf (application/pdf Object) Oral Interpretation: Silver Water by Amy Bloom. A Profile of Amy Bloom - Beyond the Couch: The Online Journal of the MNCOP. A Profile of Amy Bloom Christine MacDonald, MSW, LCSW, Fiction Editor Amy Bloom wrote Silver Water, published in her collection, Come to Me. 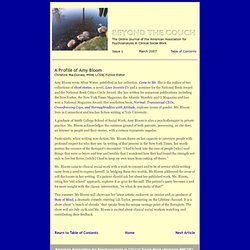 She is the author of two collections of short stories, a novel, Love Invents Us and a nominee for the National Book Award and the National Book Critics Circle Award. She has written for numerous publications including the New Yorker, the New York Times Magazine, the Atlantic Monthly and O Magazine and has won a National Magazine Award. Her nonfiction book, Normal: Transsexual CEOs, Crossdressing Cops, and Hermaphrodites with Attitude, explores issues of gender. Ms. A graduate of Smith College School of Social Work, Amy Bloom is also a psychotherapist in private practice.

Particularly, when writing non-fiction, Ms. Ms. This summer, Ms Bloom will showcase her latest artistic endeavor, as creator and co-producer of State of Mind, a dramatic comedy, starring Lili Taylor, premiering on the Lifetime channel. Only you: A short story by Amy Bloom. Marie has gone in to discuss, for the third time, whether or not she should dye her grey-and-brown hair. 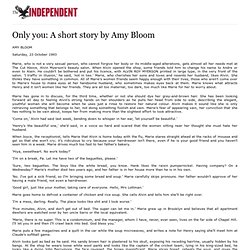 She has been looking forward all day to feeling Alvin's strong hands on her shoulders as he pulls her head from side to side, describing the elegant, youthful woman she will become when he uses just a rinse to restore her natural colour. Alvin makes it sound like she is only retrieving something that belongs to her, not doing something foolish and vain. Marie's fear of appearing vain, her conviction that she has nothing to be vain about, keeps her from making more than the slightest effort to look attractive. 'Come on,' Alvin had said last week, bending down to whisper in her ear, 'let yourself be beautiful.' 'Henry's the beautiful one,' she'd said, in a voice so hard and scared that the women sitting near her thought she must hate her husband. 'Hiya, sweetheart. 'I'm on a break, Pa. 'Sure, two baguettes. 'No. 'Good girl, just like your mother, taking care of everyone. 'Sure. 'Yeah.