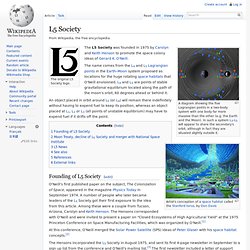 A diagram showing the five Lagrangian points in a two-body system with one body far more massive than the other (e.g. the Earth and the Moon). In such a system L3–L5 will appear to share the secondary's orbit, although in fact they are situated slightly outside it. The L5 Society was founded in 1975 by Carolyn and Keith Henson to promote the space colony ideas of Gerard K. O'Neill. The name comes from the L4 and L5 Lagrangian points in the Earth–Moon system proposed as locations for the huge rotating space habitats that O'Neill envisioned. An object placed in orbit around L5 (or L4) will remain there indefinitely without having to expend fuel to keep its position, whereas an object placed at L1, L2 or L3 (all points of unstable equilibrium) may have to expend fuel if it drifts off the point. Founding of L5 Society[edit] Marianne Williamson for Congress. Reuben H. Fleet Science Center Heikoff Dome Theater to Premiere Digital GSX™ System from Global Immersion in February. 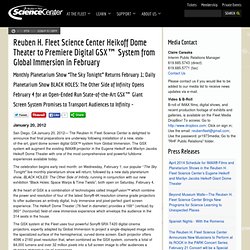 Fleet Science Center is delighted to announce that final preparations are underway following installation of a new, state-of-the-art, giant dome screen digital GSX™ system from Global Immersion. The GSX system will augment the existing IMAX® projector in the Eugene Heikoff and Marilyn Jacobs Heikoff Dome Theater with one of the most comprehensive and powerful fulldome experiences available today. The celebration begins early next month: on Wednesday, February 1; our popular “The Sky Tonight” live monthly planetarium show will return; followed by a new daily planetarium show, BLACK HOLES: The Other Side of Infinity, running in conjunction with our new exhibition “Black Holes: Space Warps & Time Twists”; both open on Saturday, February 4.

Each of the four digital cinema projectors is the size of a small refrigerator and produces a significant amount of heat and noise. The $5 million project, led by Fleet Science Center executive director Dr. National Geographic. Zero G Corporation. National Geographic. Solar Sail. This image depicts the Japanese IKAROS spacecraft, which used its solar sail to accelerate itself on its way to Venus.

Yes, solar sails exist in real life . "In frigid darkness they slept, and as they slept, the cold winds of light between the stars swept them onward, slowly... " So you've got your nice big spaceship, but you have one big problem - fuel. It's heavy and runs out real quick. The solution? Open/close all folders Anime The Odette II , the yacht club's training vessel (and a former pirate ship), in Mouretsu Pirates . Film The Venture Star in Avatar uses a solar sail to accelerate to its destination several lightyears away. 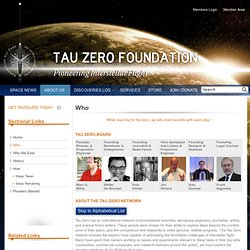 Tau Zero has an international network of accomplished scientists, aerospace engineers, journalists, artists, and science fiction writers. These people were chosen for their ability to explore ideas beyond the comfort zone of their peers, plus the competence and objectivity to make genuine, reliable progress. The Tau Zero network includes the experts most capable of addressing the formidable challenges of interstellar flight. Many have spent their careers working on issues and experiments relevant to these tasks in their day-jobs (universities, commercial companies, and research institutes around the globe), yet must explore the grander ambitions of star flight on their own.

Defining Characteristics The Tau Zero network covers a span of skills. Our network also covers a span of disciplines: human relevance, destinations, and getting there. Passing Cloud, A Giant Floating Cloud-Shaped Aircraft. Synthesis2012.com. Arc 38 ~ LIfe On The Farm. Farm Sanctuary. Best Private Islands: Bahama's Star Island. What in Star Island's construction so far is proving to be the most effectively eco-friendly? 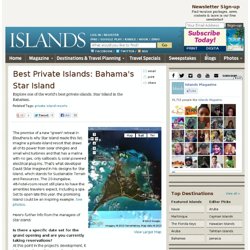 The project is using a micro-grid power system that incorporates solar power, wind power and micro-hydro sources. As opposed to draining electricity from a grid like current developments, the homes and hotel rooms on Star Island will fuel the grid simply because of their seamlessly integrated power sources such as Photovoltaic shingles and mini wind turbines. By using this revolutionary new power system, the entire island will be completely non-dependent upon traditional electricity and power sources, and guests won't know the difference!

Flat screen TVs and air conditioning will all be able to be enjoyed without any environmental impact-derived guilt. As a bonus, during hurricanes and storms when electricity tends to go out in the islands, Star Island's power supply will be stronger than ever. SponsorHub - The Sponsorship Marketplace.