Harmful Algae : Red Tide. 8th US HAB symposium 8th Symposium on Harmful Algae in the U.S., Long Beach, California Go to the link » Move This cyanobacterial bloom has the typical appearance of a thick layer of green paint. 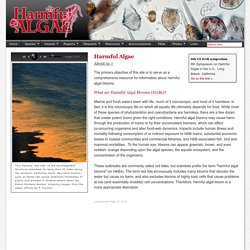 The bloom was found to consist of toxic species in the genus Microcystis. (Photo by W. An example of foam produced during a Phaeocystis bloom in the North Sea. About us > The primary objective of this site is to serve as a comprehensive resource for information about harmful algal blooms. Red tide. Red tide is a common name for a phenomenon known as an algal bloom (large concentrations of aquatic microorganisms) when it is caused by a few species of dinoflagellates and the bloom takes on a red or brown color. 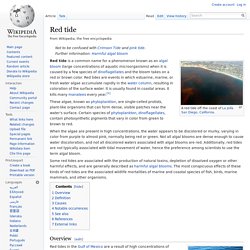 Red tides are events in which estuarine, marine, or fresh water algae accumulate rapidly in the water column, resulting in coloration of the surface water. It is usually found in coastal areas. It kills many manatees every year.[1] These algae, known as phytoplankton, are single-celled protists, plant-like organisms that can form dense, visible patches near the water's surface.

What is a red tide? Harmful algal blooms, or HABs, occur when colonies of algae—simple plants that live in the sea and freshwater—grow out of control while producing toxic or harmful effects on people, fish, shellfish, marine mammals, and birds. 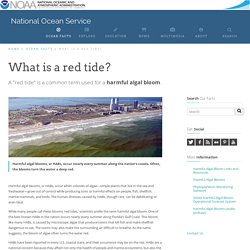 The human illnesses caused by HABs, though rare, can be debilitating or even fatal. While many people call these blooms 'red tides,' scientists prefer the term harmful algal bloom. One of the best known HABs in the nation occurs nearly every summer along Florida’s Gulf Coast. This bloom, like many HABs, is caused by microscopic algae that produce toxins that kill fish and make shellfish dangerous to eat. The toxins may also make the surrounding air difficult to breathe. HABs have been reported in every U.S. coastal state, and their occurrence may be on the rise. But not all algal blooms are harmful. Red Tide. Created by Monica Bruckner, Montana State University The water in Penn Cove (Coupeville, WA) turned orange on 5/8/04 due to a "red tide. 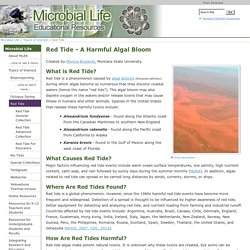 " Photo courtesy of Mary Jo Adams (copyright 2004). What is Red Tide? Red tide is a phenomenon caused by algal blooms (Wikipedia definition) during which algae become so numerous that they discolor coastal waters (hence the name "red tide"). The algal bloom may also deplete oxygen in the waters and/or release toxins that may cause illness in humans and other animals. Alexandrium fundyense - found along the Atlantic coast from the Canadian Maritimes to southern New England Alexandrium catenella - found along the Pacific coast from California to Alaska Karenia brevis - found in the Gulf of Mexico along the west coast of Florida.

Algal bloom. Taken in October 2011, the worst algae bloom that Lake Erie has experienced in decades. 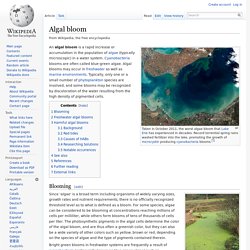 Record torrential spring rains washed fertilizer into the lake, promoting the growth of microcystin producing cyanobacteria blooms.[1] An algal bloom is a rapid increase or accumulation in the population of algae (typically microscopic) in a water system. Cyanobacteria blooms are often called blue-green algae. Algal blooms may occur in freshwater as well as marine environments. Typically, only one or a small number of phytoplankton species are involved, and some blooms may be recognized by discoloration of the water resulting from the high density of pigmented cells. Blooming[edit] Algal blooms can present problems for ecosystems and human society. Since 'algae' is a broad term including organisms of widely varying sizes, growth rates and nutrient requirements, there is no officially recognized threshold level as to what is defined as a bloom. DPH: Occupational and Environmental Epidemiology: Cyanobacteria.

Clean Water Education Partnership - Algae Blooms and Fish Kills. Fish kills can be caused by algal blooms, harmful bacteria and viruses, or pesticides and herbicides in the water. 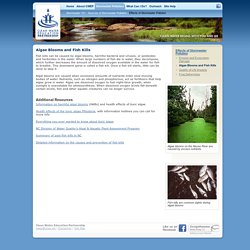 When large numbers of fish die in water, they decompose, which further decreases the amount of dissolved oxygen available in the water for fish to breathe. This downward spiral is called a fish kill. Once a fish kill starts, little can be done to stop it. Redtide – Red Tide Algae – Red Tide Effects. The devastating effects of red tide Environmental: Responsible for large fish kills, leading cause of death of manatees ( an endangered species ) and blamed for many dolphin deaths. 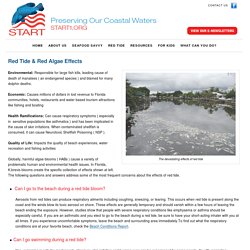 Economic: Causes millions of dollars in lost revenue to Florida communities, hotels, restaurants and water based tourism attractions like fishing and boating Health Ramifications: Can cause respiratory symptoms ( especially in sensitive populations like asthmatics ) and has been implicated in the cause of skin irritations. Red Tide – What Is Red Tide – Red Tide Causes. Red Tide Bloom Florida red tide is a specific type of Harmful Algae Bloom ( HAB ) HABs are a worldwide phenomenonRed tide is caused by a microscopic algae, Karenia brevisK. brevis can kill large numbers of fish and other sealife including dolphins and manatees and can make shellfish poisonous to humansK. brevis produces airborne toxins that can cause respiratory irritationRed tide can cause skin irritationsRed tide waters can be several colors, but not all discolored water is a red tide Red tides are caused by an explosive growth and accumulation of certain microscopic algae, predominantly dinoflagellates, in coastal waters. 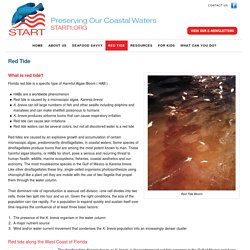 Some species of dinoflagellates produce toxins that are among the most potent known to man. These harmful algae blooms, or HABs for short, pose a serious and recurring threat to human health, wildlife, marine ecosystems, fisheries, coastal aesthetics and our economy. Aquatic Climate Change Adaptation Services Program (ACCASP) In general, precipitation is expected to increase in high latitudes and in locations and seasons that presently have high precipitation, and to decrease in locations elsewhere and seasons that presently have low precipitation. 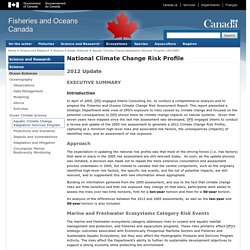