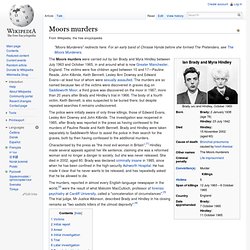 The victims were five children aged between 10 and 17—Pauline Reade, John Kilbride, Keith Bennett, Lesley Ann Downey and Edward Evans—at least four of whom were sexually assaulted. The murders are so named because two of the victims were discovered in graves dug on Saddleworth Moor; a third grave was discovered on the moor in 1987, more than 20 years after Brady and Hindley's trial in 1966. 1 Cat 1 Christmas. 1 Cat 1 Christmas Video.