Why Kids Need Schools to Change 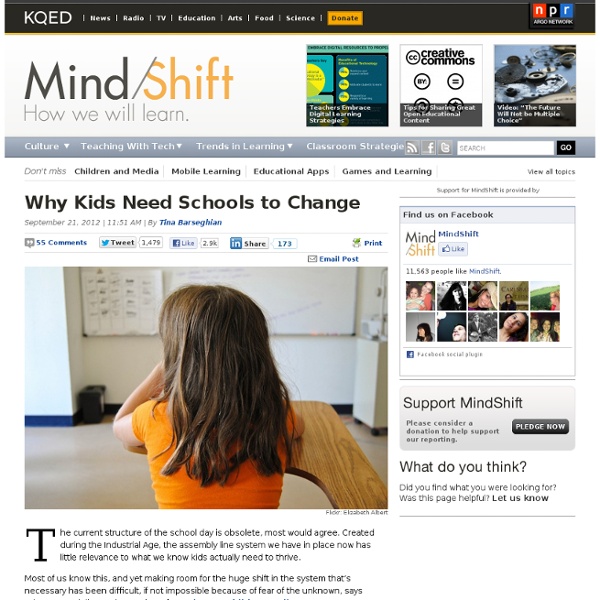 Big Ideas Flickr: Elizabeth Albert The current structure of the school day is obsolete, most would agree. Created during the Industrial Age, the assembly line system we have in place now has little relevance to what we know kids actually need to thrive. Most of us know this, and yet making room for the huge shift in the system that’s necessary has been difficult, if not impossible because of fear of the unknown, says educator Madeline Levine, author of Teach Your Children Well. “People don’t like change, especially in times of great uncertainty,” she said. “I’m astounded at the glacial pace of change in education.” During this time of economic uncertainty, especially, Levine said parents want to make sure their kids won’t fall into the ranks of the unemployed and disenfranchised young people who return home because they’re unable to find jobs. Yet therein lies the paradox. “I’m astounded at the glacial pace of change in education,” she said. PROJECT BASED LEARNING.

What’s So Great About Schools in Finland? Big Ideas Culture Teaching Strategies Flickr: Leo-seta The world looks to schools like this in Vantaankosken, Finland, as the model of success. Finland has been hailed for exemplifying the ideal model of a thriving, innovative education system that prioritizes the most important stakeholders: students. International and American media are fascinated by the Scandinavian country’s approach to designing the education system. So what makes the Finland story so compelling? THERE ARE NO PRIVATE SCHOOLS. Clearly, the Finland system can’t simply be picked up and dropped into the U.S. — in fact, Sahlberg himself advised against it: “Don’t try to apply anything,” he said in the Times article. There are too many divergent factors for that to happen. “You know, one big difference in thinking about education and the whole discourse is that in the U.S. it’s based on a belief in competition,” Sahlberg said. Related Explore: assessment, Finland, PISA

7 Big Hurdles In Education and Ideas For Solving Them Teaching Strategies An infographic can hardly contain enough space to tackle the big, hairy challenges of American education. But the non-profit, Digital Promise, has tried to identify some of the biggest challenges — and ideas for solutions — identified by the 46 schools in their League of Innovative Schools that are trying new techniques. Click on the image above to see all seven challenges and their solutions. Related Explore: Digital Promise, League of Innovative Schools

Three Things to Unlearn About Learning Inquiry Learning Teaching Strategies flickr:CDsessums “If you’re not feeling uncomfortable about the state of education right now, then you’re not paying attention to the pressures and challenges of technology,” said Will Richardson, a veteran educator author and consultant, at a talk at ISTE 2012. “We need to acknowledge that this is a very interesting moment, and even though in a lot of ways this isn’t what we signed up for when we went into teaching… as educators, it’s our job to figure it out.” Seeing the balance move from a place of scarcity of information to over-abundance on the web — and the ability to “carry around the sum of human knowledge on our phones” — Richardson said educators must start thinking of schooling differently. To that end, Richardson proposed a challenge to educators to unlearn three important things that have been taken for granted as immovable, unchangeable ideas. 1. 2. others are doing, other classrooms and other schools. 3. Related

Family Diversity in the Classroom - Teaching Family Diversity | Welcoming Schools Family is the most basic element of self-identification for young children; it shapes and informs their sense of self and who they are in the world. It is important for students to see their families reflected in the world around them, while at the same time seeing the diversity of families that also exists in our communities. Organize evening events to bring your school community together and involve more parents and guardians in your school.

39 Sites For Using iPads in the Classroom Pages Friday, October 7, 2011 39 Sites For Using iPads in the Classroom How Much Did Steve Jobs Change the World? 5 Great iPad Apps For Early Childhood Teachers10 iPad Apps Everyone Should Have- from PC Magazine10 Must Have iPad Apps for Students and Teachers10 Ways to Use iPads in Your Classroom40 iPad Apps Librarians Love40 Most Awesome iPad Apps for Science Students50+ iPad Apps By a Geography Teacher62 Interesting Ways to Use an iPad in the Classroom100 Incredibly Useful and Free iPad AppsBest Academic Reference Apps for the iPad- some $$, some freeA Day in the Life of the iPad ClassroomThe Debate Over iPads in EducationDigital Storytelling with the iPad ShareThisFacebookTweetLinkedInPinterestEmail Posted by Julie Greller at 7:24 AM Labels: ipads, ipads in the classroom, using ipads in the classroom 16 comments: MorganOctober 15, 2011 at 5:25 PMThanks for posting my blog on this site. Add comment Load more... Links to this post Create a Link Newer PostOlder PostHome LinkWithin AddToAny t

Dynamic Assessment: Components of a Mediated Learning Experience (MLE) Modifiability is the way we describe the child's response to a MLE based on our observations during a teaching session. It is important to consider a child's modifiability when applying the MLE. Specifically, we are looking at child responsivity, transfer skills, and examiner effort. Child Responsivity How well does the child respond to the MLE?Does the child attend to the task, and maintain attention? Transfer How well does child apply the target skills from one item to the next? Examiner Effort How much support does the child need? The other thing that we're doing during mediated learning is we're looking at child modifiability, and here we're describing what the child does in response to mediated learning. One is responsivity: How responsive is the child to intervention? The other is watching how they transfer. The third area that we look at is examiner effort. Previous Page | Continue to Example: Using Dynamic Assessment for Vocabulary Testing

Teach for Understanding Teaching Tips TEACH FOR UNDERSTANDING by Larry Flammer 1. Use Pre-Tests (surveys of knowledge), especially where there are widespread misconceptions about critical topics, e.g., the nature of science and evolution. 2. 3. 4. 5. 6. 7. 8. 9. Can Kids Be Taught Persistence? Culture Teaching Strategies Flickr:Miish By Jennie Rose In his new book How Children Succeed: Grit, Curiosity, and the Hidden Power of Character, author Paul Tough makes the case that persistence and grit are the biggest indicators of student success. Being resilient against failure, he says, is the fundamental quality we should be teaching kids, and he gives examples of where that’s being done. Dominic Randolph, the headmaster at the elite Riverdale Country School in the Bronx, New York, who believes students don’t know how to fail, is one of the sources in Tough’s book who has set out on a road to change an “impoverished view” of learning. Another primary source in the book is David Levin, co-founder of the charter KIPP Academy, who developed a student character report card to cultivate this resilience and self control in his students. “What I think is important on the road to success is learning to deal with failure, to manage adversity. Related Explore: Failure, grit, Paul Tough