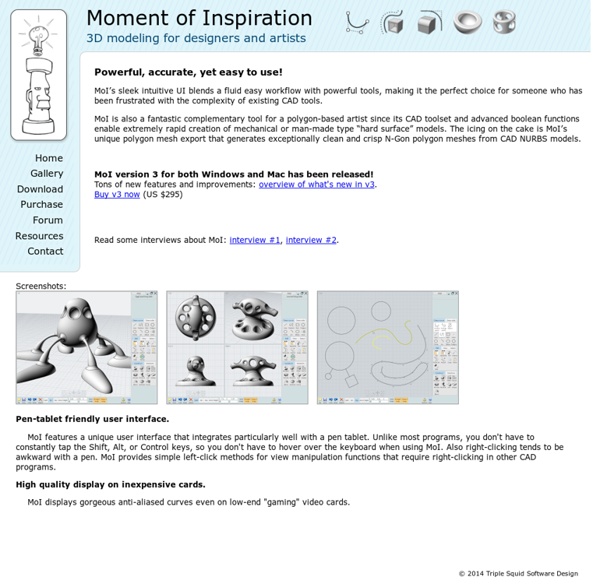 Video Tutorial Box Modeling a Male Video Tutorial: Box Modeling a Male by Harsh Borah, Vancouver, Canada These are In-Depth timelapse videos of my process of modeling a realistic male figure. I used box modeling technique for this particular piece. Started with a cube, roughing out the whole body, then separating rough mesh into different parts. Like Torso, Head, Arms, Legs and further detailing each part separately. Part 2. Part 3. If you are on slow connection or want to keep these tutorials for future viewing then you can download these video tutorials from CGArena forum. Modelling a thrust vectoring jet engine in Blender CISPA, which would make it possible for the U.S. government to request information about you from private corporations without a warrant and without you knowing about it, passed the House Of Representatives on April 18th 2013. Stop it from being signed into law. 1. I've seen a lot of good (blender) animations, made by skilled people, which involved jet engines. To share my ideas, I wrote this tutorial. I used Blender version 2.45. To view the end result (in a rather low quality...): an animation of the thrust vectoring at work. 2. First, it's a good idea to look up how exactly a (thrust vectoring) jet engine works. Then, you have make a plan. Mock-up nozzle blade dupliverted. 3. Now you can start modelling the nozzle blades. One set of blades modelled. As you can see, the circle I used for dupliverting is still there, because I use it as a guide, which is needed later on when duplicating the blades. The next step is to add some empties for controling the movement contraints. 4. 5.

Secrets of Swimsuit Babe Secrets of Swimsuit Babeby Jimmy Chow, Hong Kong Introduction Making an attractive woman is always a goal for most CG enthusiasts. It’s also true to me. The costume of the character would need to show most of the body. The character would be fictitious. Modeling Objective - To make an attractive woman, the facial features as well as the body must be well proportioned. Approach - Here I’m going to do usual polygon modeling. There are basically two different approaches for polygon modeling: box modeling and patch modeling. My goal is to create a model having a good topology up to the level which is good enough to make it look attractive. Moreover, I’ll not eagerly pursue all-quad model and edge loops because I don’t see why they’re necessary. Finally I’m not going to paint texture like painting game characters. Beware of the contours or outlines you’re making. Always refer to references and instructions in drawing books as much as you can.

Modeling for animation – Body | CGmascot Character modeled for animation is modeled to deform well in animation. This article desbribes benefits of edgeflow and edgeloops and the general ways to use them on a human/humanoid torso and limbs. To begin check out my article on surface flow, if you already haven’t. An Edge Loop is an interlocking series of continuous mesh edges used to accurately control the smoothed form of an animated subdivision surface. Edgeflow and Edgeloop are essentially the same thing. Overall edgeflow within each looped area matters, too. The general advice is to model the flows following the main muscles under the skin. What if you want superb muscle definition? What are the Main Masses moving in a human/humanoid? Back of a character bends below the chest. Highlights and edges show the flows I like to use for this model. The loops above, in limbs and at the top of the shoulder, are variations of a very useful x-loop. Also here is another version, a knee with more ‘mass’ left in. You can do varied X-loops.

Part 7: The Ear I am finishing things off with the ear. 1. I start off with adding edges so I will have enough definition to form the shape of the ear. I also start things off by creating a pole-type topology for the ear. I connect and then rotate the newly-created ring. 2. 3. 4 - 7. 8. So that is it for the head. Text and Images Copyright © 2004 Tony Jung. Part 4: The Nose Okay, now for the nose. I do not model the nose until about now. The reason is because, the nose is a b*tch to model. One of the thing that makes the nose so tricky to model is that it requires more densely packed definition in a small area and that can cause problems, especially if it produces 5-points that won't play nice with deformation. Now a little rundown of what I did in this series. 2. 3. 4. 5. 6. 7. Text and Images Copyright © 2004 Tony Jung.

Edge Loop - Bay Raitt Modeling In keeping with our theme of making a mess, get to the model into a state that you like as quickly as possible. You have to see what you're making before you can revise it. Remember though, the efficiency rules still apply. The edge loop When modeling the moving organic form, it is critical that you give yourself the control curves that will let you best manipulate silhouette and contour. Finally, study shadows of people and animals to look for inspiration about where to place your control curves. fairylikeness and design copyright 1998 Nichimen Graphics and Bay Raitt