3 reasons I’ll not be returning to Twitter. I’ve decided, for three reasons, that Twitter from now on is going to be an ‘endpoint’, somewhere I link to my thoughts and ideas. 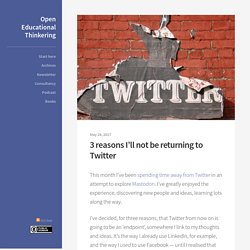 It’s the way I already use LinkedIn, for example, and the way I used to use Facebook — until I realised that the drawbacks of being on there far outweighed any benefits. This model, for those interested, is known as POSSE: Publish (on your) Own Site, Syndicate Elsewhere. There’s three main reasons I came to this decision: 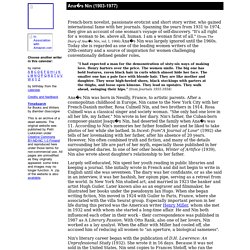 Spanning the years from 1931 to 1974, they give an account of one woman's voyage of self-discovery. "It's all right for a woman to be, above all, human. I am a woman first of all. " (from The Diary of Anas Nin, vol. Elcolighting. "sense of an ending" book. Cory Doctorow: Information Doesn’t Want To Be Free. Editor’s note: Cory Doctorow is a science-fiction author, activist, journalist and blogger, as well as the co-editor of Boing Boing. 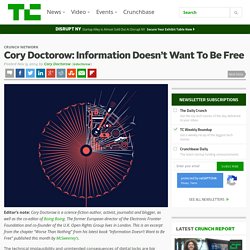 The former European director of the Electronic Frontier Foundation and co-founder of the U.K. Open Rights Group lives in London. iGenogram on the App Store. GenoProX. The best user friendly genealogy software in the market, just got better, perfect for hobbyists yet built to handle the most complex professional family trees. 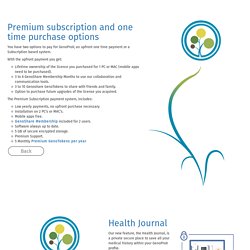 At the heart of GenoProX is a new revolutionary collaboration platform GenoShare. Running on a stunning graphical interface that will work multiplatform from PC to Mac to Mobile. You will be able to easily invite family members that can edit the same document simultaneously. We also believe that heritage can help live a healthier life through a better understanding of your genetic progeny and by safekeeping your Health history. Our new feature, the Health Journal, is a private secure place to save all your medical history within your GenoProX profile. No hassle, simple to share, easy to manage repository of information with a platform designed to develop very powerful analytic tools. All new subscription option to purchase GenoProX Family. Genogram Software - Free Templates. Build Genograms Using Templates SmartDraw is the easiest-to-use genogram software because it comes with templates to help you get started. 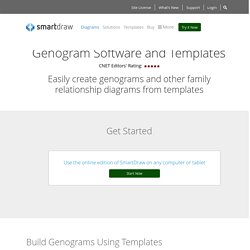 Here's how easy it is. Start with one of the included genogram templates. It already has a basic relationship diagram started for you with a generic family: husband, wife, daughter, and son. Next, add other family members using the genogram symbol library provided. Callback. Why's (Poignant) Guide to Ruby. German Report on the Battle of Jutland, 29 June 1916. Reproduced below is the official German report issued in the wake of the 31 May-1 June 1916 Battle of Jutland - up to that point arguably the greatest naval battle in history. 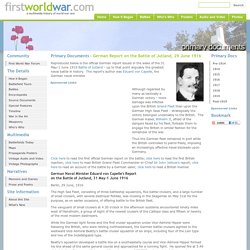 The report's author was Eduard von Capelle, the German naval minister. Although regarded by many as tactically a German victory - more damage was inflicted upon the British Grand Fleet than upon the German High Seas Fleet - strategically the victory belonged undeniably to the British. The German Kaiser, Wilhelm II, afraid of the dangers faced by his fleet, forbade them to engage the British in similar fashion for the remainder of the war. Thus the German fleet remained in port while the British controlled to patrol freely, imposing an increasingly effective naval blockade upon Germany. Battles - The Battle of Jutland, 1916.

The greatest naval battle of the First World War. 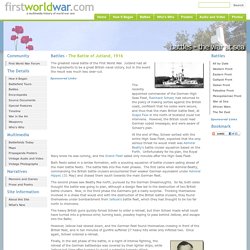 Jutland had all the ingredients to be a great British naval victory, but in the event the result was much less clear-cut. The recently appointed commander of the German High Seas Fleet, Reinhard Scheer, had returned to the policy of making sorties against the British coast, confident that his codes were secure, and thus that the main British battle fleet, at Scapa Flow in the north of Scotland could not intervene. However, the British could read German coded messages, and were aware of Scheer's plan. At the end of May, Scheer sortied with the entire High Seas Fleet, expected that the only serious threat he would meet was Admiral Beatty's battle cruiser squadron based on the Forth. What was the Battle of Jutland, why was it so important to the First World War - and who won? Fleet Information - Korean Air.

368 Seats The seat type may differ according to the number of seats within the same fleet type. 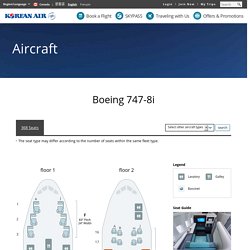 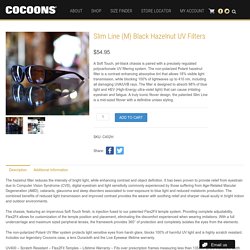 It has been proven to provide relief from eyestrain due to Computer Vision Syndrome (CVS), digital eyestrain and light sensitivity commonly experienced by those suffering from Age-Related Macular Degeneration (AMD), cataracts, glaucoma and sleep disorders associated to over-exposure to blue light and reduced melatonin production. The combined benefits of reduced light transmission and improved contrast provides the wearer with soothing relief and sharper visual acuity in bright indoor and outdoor environments.

Una mappa per non perdersi tra i #digitalskills. Spiraling Out of Control: The Greatest Spiral Stairs in the World. Recently the Loretto Chapel was entered into the Atlas. 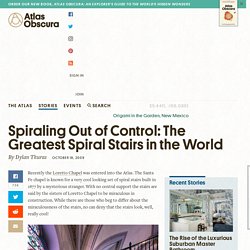 The Santa Fe chapel is known for a very cool looking set of spiral stairs built in 1877 by a mysterious stranger. LaGuardia ePortfolio. 2012 - Present: ePortfolios and Outcomes Assessment The CTL plays a key role in supporting the College’s assessment process. Our ePortfolio team assists faculty and students with the depositing of assessment artifacts, and with collecting the materials needed for faculty engaged in the Periodic Program Review process mandated by CUNY. Our professional development seminars include activities that assist faculty in developing assignments that help students develop core competencies. The ePortfolio staff also work closely with faculty to customize ePortfolio templates for particular programs, such as Business, Fine Arts, Nursing, Occupational Therapist Assistant, and Physical Therapist Assistant.

Showthread. Yes. You can edit the TOC field code, using the "\n" switch to instruct Word not to use page numbering for a particular heading level (in this case, Heading 1). See this Microsoft Knowledge Base article for more information (navigate about halfway down to the section about the "\n" switch).Go to the page where the TOC starts and press Alt F9 to display the TOC field codes (what you normally see is the code results).

Insert your cursor into the code and type the switch, using the syntax shown in the Knowledge Base article -- except, since you want to hide the page numbering for only one heading level, use { TOC \n 1-1 } (i.e., hide the page numbering for level 1) rather than { TOC \n 3-4 } (hide the page numbering for levels 3 and 4). Jeff Kahm. Stylus/Stylus Publishing - High-Impact ePortfolio Practice: A Catalyst for Student, Faculty, and Institutional Learning. “A handbook of everything educators need to know about the current state of the art, capped off with a rovocative look at the synergy of ePortfolios with other student success interventions. . ” - John N. Gardner, President, Gardner Institute for Excellence in Undergraduate Education; and Betsy O. Barefoot, Senior Scholar , Gardner Institute for Excellence in Undergraduate Education “Drawing on years of work with campuses nationwide, the authors provide excellent analyses of best practices in ePortfolio use, and they situate their examples in critical contexts that demonstrate the role ePortfolios play in facilitating reflection and integration, essential elements of impactful education.

Exporting HTML from Tinderbox 7: Using CSS for a Help Book – The Eclectic Light Company. Tinderbox is a wonderful tool for developing structured content, then transforming it into different formats, most notably HTML. Adornments as map dividers. It is possible to set zero width or height for an adornment allowing it to server as a rule or linear divider on a map. Peter Hurd - Artist Art for Sale - Peter Hurd. Downloads – The Eclectic Light Company. Apps (for Macs only) Consolation – a log browser for macOS Sierra Consolation provides an accessible but powerful way to browse, search, and analyse entries in the new log system which have already been captured.

This is not currently supported by Apple’s Console app. Badge Systems - Open Badges In Higher Education. Building a text database using Tinderbox – The Eclectic Light Company. I’ve been writing Question and Answer (Q&A) sections for Mac publications for longer than I care to remember. Despite having advised many questioners to use tools like Tinderbox to help them structure their work and keep it in order, I’ve never been particularly good at that myself.

Currently, I write the Genius Tips section for MacFormat, which with its sister title Mac|Life are, I believe, the last general-readership Mac magazines still in print. iPad Pro - Technical Specifications - Apple. iMac: Everything We Know. 20-Year-Old Hunter S. Thompson’s Superb Advice on How to Find Your Purpose and Live a Meaningful Life. As a hopeless lover of both letters and famous advice, I was delighted to discover a letter 20-year-old Hunter S. Thompson — gonzo journalism godfather, pundit of media politics, dark philosopher — penned to his friend Hume Logan in 1958. The Dementia Care Economy. Auntie Dogma's Garden Spot. Crowded Out of Ivory Tower, Adjuncts See a Life Less Lofty. The Death Of Expertise. I am (or at least think I am) an expert. Not on everything, but in a particular area of human knowledge, specifically social science and public policy.

WinterFest 2014. Together. Young Delacroix on the Importance of Solitude in Creative Work and How to Resist Social Distractions. A Portfolio Journey by paul wasko on Prezi. IAIA MFA in Creative Writing Bulletin – Low Rez.