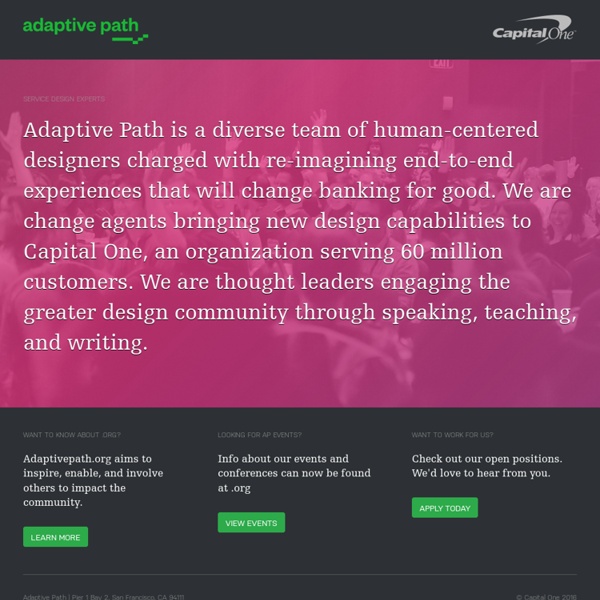 Kim Goodwin's UI15 workshop description Scenarios remove the guesswork for your design process Kim GoodwinConsultant and author of Designing for the Digital Age [X] Hide this window Click the play button to start the preview Development, Technology Topics, simple, it management, interface, CIO role, Apple-simple, Apple CIO — The consumerization of IT pressures CIOs to make office tools as easy to use as personal technology. Some CIOs strive for new systems that are "Apple-simple," meaning the interface is so simple that no formal training is required. Just pinch or tap, swipe and go. (For more on the challenges of simplification, see "CIOs In Search of Simplicity.") Employees expect an immaculate user experience, but they don't necessarily grasp that building secure--and pretty--mobile access to the ERP suite may be a tad more difficult than creating an app that lets iPhone users pop virtual bubble wrap.

A Game of Shark and Minnow - Who Will Win Control of the South China Sea? A Game of Shark and Minnow In a remote corner of the South China Sea, 105 nautical miles from the Philippines, lies a submerged reef the Filipinos call Ayungin. Satellite imagery: NASA Why the Flat Design Trend is Hurting Usability The flat design trend has taken over the graphic design world in a very short amount of time. One of the first big interfaces to go flat was Windows 8. However, it wasn’t until the release of Apple’s iOS 7 last summer, June 10, 2013 that we really saw a huge increase in the many interfaces, websites, apps, and more that adopted a flat design. Before then, most designs were skeuomorphic with lots of 3D effects, gradients, and texture. The look is both trendy and modern, and the new design trend is still surrounded by a buzz.

Virtual Seminars Instead of your team traveling to a training course, you can take advantage of these Virtual Seminars on your schedule. Hear the latest insights on the most important design topics right from your office for only $129. Once you purchase the seminar, you can watch the presentation right on your PC screen. Our live virtual seminars are now accessible with remote CART captioning. April 2014: Lean UX: Forming & Testing Hypotheses with Josh Seiden

A History of the GUI Introduction Today, almost everybody in the developed world interacts with personal computers in some form or another. We use them at home and at work, for entertainment, information, and as tools to leverage our knowledge and intelligence. It is pretty much assumed whenever anyone sits down to use a personal computer that it will operate with a graphical user interface. We expect to interact with it primarily using a mouse, launch programs by clicking on icons, and manipulate various windows on the screen using graphical controls. But this was not always the case.

Visual Thinking + Synthesis Photo by Ken Yeung I really enjoy talking complex subjects, processes or business problems and boiling them down to their core essence. This is becoming known as the process of "Visual Thinking". What You Can Learn From Google’s Material Design - Tuts+ Code Article Not too long ago, Google introduced Material Design, a brand new set of guidelines for designers and developers alike. Material Design introduces a fresh perspective on user interfaces, motion, and interaction states, and are a great foundation for you to build a product upon. In essence, you can summarize Google's Material Design by two components: MaterialMotion Material provides context in design, the surface and edge of a "material" provides us visual cues.

User Interface Conference 15 - November 8-10, 2010 - Boston, MA Purchase Now For $229 Audio Sample Learn about content strategy (5:46) Kristina Halvorson discusses messaging: how to define and build it. New Defining the User Experience One of the best blogs I know on user experience is Logic+Emotion. This is the personal blog of David Armano who is VP of Experience Design with Critical Mass, a professional services firm that works on creating outstanding experiences. His great strength is in creating fantastic visuals.

Touch Gesture Reference Guide The Touch Gesture Reference Guide is a unique set of resources for software designers and developers working on touch-based user interfaces. The guide contains: 1) an overview of the core gestures used for most touch commands 2) how to utilize these gestures to support major user actions 3) visual representations of each gesture to use in design documentation and deliverables 4) an outline of how popular software platforms support core touch gestures (below). Download Better User Experience With Storytelling - Part One Advertisement Stories have defined our world. They have been with us since the dawn of communication, from cave walls to the tall tales recounted around fires.