20 Stunning European Cities To Visit In Your 20s. From major metropolises to charming, overlooked locales, Europe is brimming with cities everyone should visit. 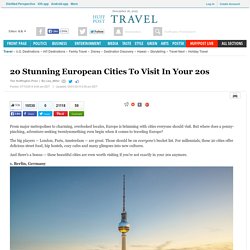 But where does a penny-pinching, adventure-seeking twentysomething even begin when it comes to traveling Europe? The big players -- London, Paris, Amsterdam -- are great. The secret world of Disneyland. Disneyland may look like a straightforward theme park. 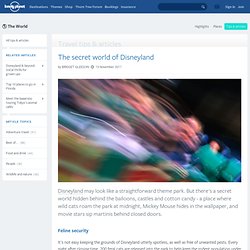 But there's a secret world hidden behind the balloons, castles and cotton candy - a place where wild cats roam the park at midnight, Mickey Mouse hides in the wallpaper, and movie stars sip martinis behind closed doors. Feline security. The Seven Wonders of the World. 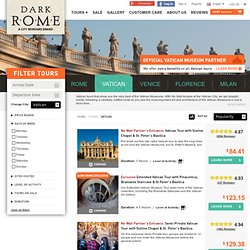 Peter's Basilica Rome tours that take you past long, general access lines to see the best Rome monuments. Wondering what to do in Rome? Our Rome walking tours visit the all the best things to see in Rome, from the Trevi Fountain to the Roman Pantheon, Piazza Navona and Spanish Steps. All our tours in Rome include headsets, so you can always hear your tour guide, organized meeting points and the support of a full Customer Care team. Capture the City Photo Competition: the winner – Lonely Planet blog. When we launched the Capture the City photo competition, we weren’t sure how travellers would respond. 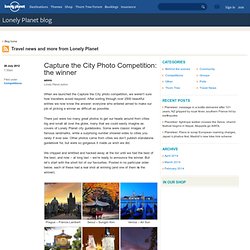 After sorting through over 2500 beautiful entries we now know the answer: everyone who entered aimed to make our job of picking a winner as difficult as possible. There just were too many great photos to get our heads around from cities big and small all over the globe, many that we could easily imagine as covers of Lonely Planet city guidebooks. Some were classic images of famous landmarks, while a surprising number showed sides to cities you rarely if ever see. Bangkok: still the world’s greatest backpacker hub? – Lonely Planet blog. Top 10 Most Beautiful Cities in the World. Dreaming of traveling the world or visiting some of the most famous cities in the world? 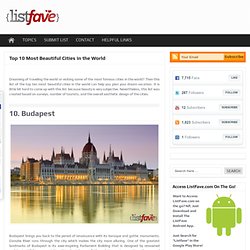 Then this list of the top ten most beautiful cities in the world can help you plan your dream vacation. It is little bit hard to come up with this list because beauty is very subjective. Nevertheless, this list was created based on surveys, number of tourists, and the overall aesthetic design of the cities. Budapest brings you back to the period of renaissance with its baroque and gothic monuments. Danube River runs through the city which makes the city more alluring. World's coolest zip lines. It wouldn't be Vegas if zip lining didn't take place at night beneath a laser light show set to music. 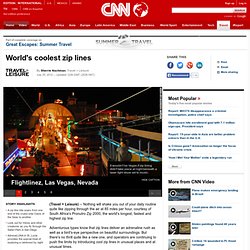 Zip lines have become a common feature of the Caribbean, but newcomer AdrenaLUNA provides the special treat of exploring a rainforest by night. A father-and-son team launched the Skyline Tour in 2002. It travels thousands of feet above ground and above the clouds near the summit of Haleakala Crater. 27 of the deepest canyons you can explore [PICs] Canyons can be the most committing — and rewarding — places to hike, paddle, climb, float. 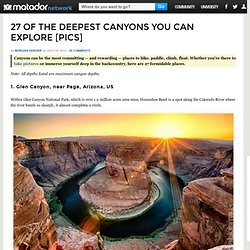 My Top 10 Historic Travel Destinations. History has a weight, a specific gravity. 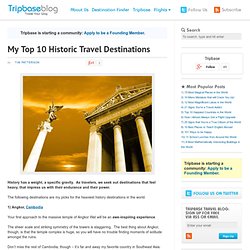 As travelers, we seek out destinations that feel heavy, that impress us with their endurance and their power. Top 10 Incredible Caves. A lot of cool stuff goes on under the ground. 15 Most Magical Places in the World. Want to share the magic? 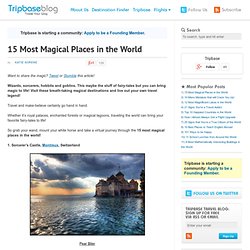 Tweet or Stumble this article! Wizards, sorcerers, hobbits and goblins. This maybe the stuff of fairy-tales but you can bring magic to life! Visit these breath-taking magical destinations and live out your own travel legend! Travel and make-believe certainly go hand in hand. World’s 10 best festivals. Being at festivals is like standing inside the mind of a culture as it dreams. 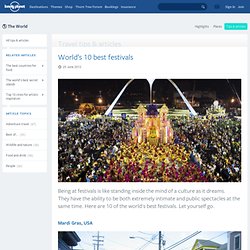 They have the ability to be both extremely intimate and public spectacles at the same time. Here are 10 of the world's best festivals. Let yourself go. Mardi Gras, USA. Brittany, France: readers' tips, recommendations and travel advice. Auray is the next delightful stop. Stroll down the hill to Saint-Goustan. A 17th-century bridge leads you to wooden medieval houses that surround a small port where Benjamin Franklin landed to obtain support for the Americans in the War of Independence. Mystical, Magical & Magnificent Monasteries in Meteora (20 Pics)

The caves in Meteora, Greece, had inhabitants for fifty millennia, but due to raids, “hermit monks” moved to the safety of sandstone rock pinnacles in the 9th century and began building monasteries. More monks and nuns came, building more monasteries perched high upon the cliffs. Wikipedia reports, “Access to the monasteries was originally (and deliberately) difficult, requiring either long ladders lashed together or large nets used to haul up both goods and people. This required quite a leap of faith — the ropes were replaced, so the story goes, only ‘when the Lord let them break.’” UNESCO World Heritage says, “The net in which intrepid pilgrims were hoisted up vertically alongside the 1,224 ft. cliff where the Varlaam monastery dominates the valley symbolizes the fragility of a traditional way of life that is threatened with extinction.”

Photo #1 by Vaggelis Vlahos A view of Meteora monasteries in Greece. Photo #5 by Gabriele Quaglia The Holy Monastery of St. 66 Beautiful Small Cities & Towns In Europe. Stay Inside Batman’s…Erotic Sexcave? World’s Most Expensive Date – England. Fascinating and Luxurious: Pimalai Resort & Spa in Thailand. Freshome readers, here’s a post that we believe will raise your spirits.

Related:  Japan under the Shoguns   -  Travel Fashion/Style   -  miragemoriarty   -  Foreign Countries   -  The secret world of Disneyland   -  The Seven Wonders of the World   -  Top 10 Most Beautiful Cities in the World   -  15 Most Magical Places in the World   -  Mystical, Magical & Magnificent Monasteries in Meteora (20 Pics)   -  66 Beautiful Small Cities & Towns In Europe   -  Hidden flavours of Paris   -  Forgotten NY   -  destinations   -  DESTINATIONS   -  Europe's Popular Destinations   -  Destinations   -  Southeast Asia - Destinations   -  Tourist destinations (physical + human attractions?)   -  Landscape photos | landscapes with a soul   -  40 Most Useful Travel Websites That Can Save You a Fortune   -  Travel Buddies, Travel Reviews, Travel Community   -  Top 100 Hillman Wonders of the World - Rankings you can trust   -  Beautiful Places to Visit -   -  50 of the Most Important Landmarks of the World (Part 1)   -  The Seven Lost Cities Of The World   -  Amazing Events Around the World   -  Amazing Places To Experience Around The Globe (Part 1)   -  The Cool Hunter - Amazing Places To Experience Around The Globe (Part 1)   -  The Triple Waterfall Of Baatara Gorge   -  Hidden Travel Place | The Beauty of Hidden Place in the World find and explore here on Hidden Travel Place blog .   -  The 50 Most Beautiful Natural Waterfalls in the World   -  Dance of the Spirits: Incredible Real Time Northern Lights from Jan 24 Solar Storm - YouTube   -  Yosemite Range of Light on Vimeo   -  Awesome Nature Photos Of Incredible Places - 39 Examples   -  35 Reasons to Hike the Appalachian Trail   -  The 33 Most Beautiful Abandoned Places In The World | Nature Pictures   -  Top 10 World’s Strangest Natural Wonders –   -  29 abandoned places that look truly beautiful.   -  The 24 Amazing Pools You Need To Jump In Once In Your Life | Great Travel Pictures   -  12 Beautiful World Heritage Sites | Nature Photos | Travelycia   -  Education   -  Enterprise