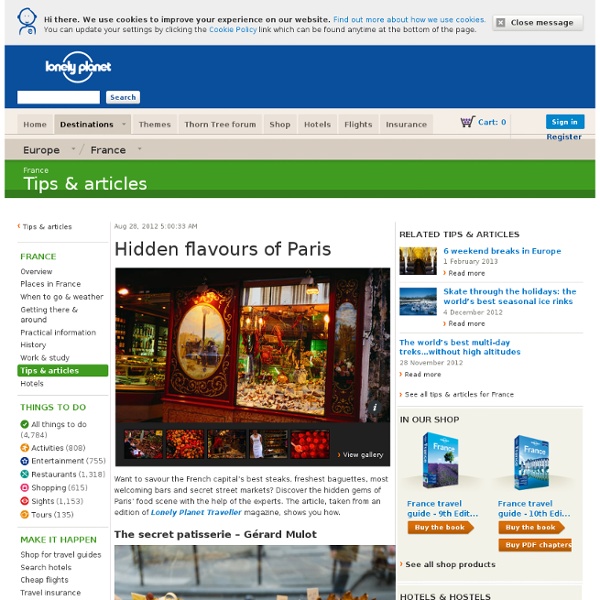 Want to savour the French capital's best steaks, freshest baguettes, most welcoming bars and secret street markets? Discover the hidden gems of Paris' food scene with the help of the experts. The article, taken from an edition of Lonely Planet Traveller magazine, shows you how. The secret patisserie - Gérard Mulot Image by Paul and Jill Gérard Mulot is a splendid patisserie and traiteur in St-Germain. It's not far from the Jardin du Luxembourg, so you can pick up all you need for a picnic. - Jeremy Lee, head chef of London's Blueprint Cafe The secret bar - La Cagnotte de Belleville La Cagnotte de Belleville (13 Rue Jean-Baptiste Dumay, 75020) is extremely scruffy but perfectly Parisian. - Trish Deseine, food writer and cook The secret cheese shop - Fromagerie Trotté Fromagerie Trotté (97 Rue St Antoine, 75004) is a tiny little shop in the Marais. - Sheila Dillon, present of BBC Radio 4's The Food Programme The secret restaurant - Benoit I've been eating at Benoit for 25 years. Image by Fil.Al

Apartments & Bed and breakfast - Wimdu 50 Strange Buildings of the World This is the original list of 50 strange buildings which has been and is being copied (stolen) by many bloggers. If you wish to post it on your blog or website, feel free to use up to 20 buildings from this list and give a proper link to our website ( as the source article. Ok, now enjoy this weird, odd, bizarre and incredible looking arcitechture! After reading it, don’t forget to check Part II and Part III. 1. Construction of the building started in in January 2003 and in December 2003 it was finished. Image via: brocha 2. The Hundertwasser house “Waldspirale” (”Forest Spiral”) was built in Darmstadt between 1998 and 2000. The structure with 105 apartments wraps around a landscaped courtyard with a running stream. Image via: Kikos Dad 3. Image via: manuelfloresv 4. Image via: Mélisande* 5. The Longaberger Basket Company building in Newark, Ohio might just be a strangest office building in the world. Image via: addicted Eyes 6. Image via: jonathan_moreau 7.

Top 10 best value destinations for 2011 Worried that the economy might put a crimp in your travel plans next year? Never fear: travel doesn't have to break the bank. Your currency may be depressed, but that doesn't mean you have to be; there are still many destinations around the world that can be enjoyed on the cheap. If you let the global economic ups-and-downs work to your advantage, adopt some personal austerity measures in pricier destinations, and head towards up-and-coming destinations, you can stay on the road longer for less. Fresh from Lonely Planet's Best in Travel 2011 (published in November 2010) we bring you this bargainous bounty of 10 budget-friendly destinations where you can get the most bang for your buck. 1.Bangladesh This subcontinental treat might just be the cheapest place on earth to travel. Bangladesh is almost disgracefully under-visited. 2. As other Central American destinations inflate prices with an influx of travellers, there are still a few good value delights to be found in the region. 3. 4. 5.

Places to Visit in France - the most Interesting and Beautiful Regions of France and Best Places in France Almost every region in France has something interesting to discover - quiet villages, stunning scenery, historical buildings lost in the countryside, beaches...so before rushing to visit the most popular regions why not think about somewhere else for a change? You can avoid the crowds and still have a great time discovering the 'real' France! Our France regional travel guides feature hundreds of the most scenic, interesting and picturesque places to visit in all parts of France to help you better plan your visit. The most popular French regions with visitors include Brittany, the Dordogne and the Cote d'Azur (along with the rest of Provence), and of course and many tourists like to visit Paris. Plan your visit Explore Places in France Select here from the 1000's of places we have reviewed To help you better plan which part of the country you would like to visit there are several ways below to start exploring: Explore the regions of France Forgotten your French geography? Alsace Auvergne Brittany

20 free attractions in London Who cares if London's hotels and restaurants tend to be on the expensive side? No city in the world has more free stuff to do. In addition to world-class museums without a ticket admission, you get the parks, canal walks, super markets (Portobello Road Market at Notting Hill Gate, Camden Market at Chalk Farm Rd, wonderful Columbia Road Flower Market at Gosset St in East London etc) and maybe some royal-spotting, and you can fill a life. London, thank you! Here's the mere start of the free list: 1. Around, more or less, since the 13th century, the Borough Market is stuffed with food-lovers and all you need for a memorable grab-and-go breakfast or lunch. 2. Hidden under Waterloo Bridge, the institute features four cinemas (not free) and the fun Mediatheque, where you can peruse DTV/film archives and watch for free. 3. Unreal; one of London's top attractions, and absolutely free. 4. 5. 6. 7. 8. 9. Those Victorians sure liked to 'c & c' (collect and catalogue). 10. 11. 12. 13. 14. 15. 16.

When In Rome Tours - A Food Lover's Top 10 List in Rome Perhaps you arrived here instead of on one of our Rome tour pages, or perhaps you just wanted to read about Rome or something else. Anyway, we hope that the following links will help you find what you're looking for! Small group Rome tours - we offer many fascinating walks through ancient Rome. Small group Vatican tours - we have several interesting Vatican city tour options available Monday - Saturday. Private Rome tours - see and learn about the Rome which many tourists miss out on. Private Vatican tours - academic walks through the Vatican city with docents of repute. Rome blog - We have been known to write about Rome from time to time...

Top 10 Interesting Ghost Towns Around The World There are many reasons why cities are abandoned, because the economic activity that supported it has failed, or due to natural or human-caused disasters such as a flood, government action, uncontrolled lawlessness or war. Some abandoned ghost towns are now tourist attractions, while others might be dangerous or illegal to visit. Anyone else here fascinated by them? 10 - Bodie, California Founded in 1876, Bodie is the authentic American ghost town. Dwindling resources proved fatal however, and although greatly reduced in prominence, Bodie held a permanent residency through most of the 20th century. Today, Bodie is preserved in a state of arrested decay. 9 - San Zhi, Taiwan More of a modern choice this time. After this the whole thing received the cover-up treatment. 8 - Varosha, Cyprus Varosha is in the Turkish occupied city of Famagusta in Cyprus. 7 - Gunkanjima, Japan 6 - Balestrino, Italy In the late nineteenth century, the North-West coast of Italy was struck by numerous earhquakes.

Five Of The Best Non-Tourist Places To Eat In New York City When taking into consideration that there are literally thousands upon thousands of places to eat in the Manhattan area of New York alone, from cafes and delis to Michelin starred restaurants ran by world famous chefs, there really is a gastronomic delight for everyone. With millions of people visiting New York on a regular basis, everyone is looking for something different in term of places to eat. Although the main tourist spots are packed full of restaurants to suit the vast majority of tastes, it is the places that the local New Yorkers head to that are so often looked for and the following are some of the most popular non-tourist eateries in the whole of Manhattan. Lombardi’s Located at 32 Spring Street (the corner of Spring and Mott Street), Lombardi’s is a institution in Manhattan, for the simple fact that it claims to be the very first pizzeria not only in New York, but the whole of America. Grimaldi’s The Spotted Pig Located in the West Village (N.B. Bamn Katz’s Deli

40 free attractions in New York City Seeing the bulk of New York City's biggest attractions can mean spending a hefty chunk of a trip's budget on tickets. Empire State Building? $27. The Met? Free New York travelers, get busy! 1. One of Lower Manhattan's most fascinating, and controversial, stories of recent years circulates around the new African Burial Ground National Monument site. 2. Brooklyn Brewery. Free tours of Williamsburg's Brooklyn Brewery run on the hour from 1-5pm Saturday, 1-4pm Sunday. 79 N 11th St, Williamsburg, Brooklyn. 3. Imagine mosaic. It doesn't take brilliant travel minds to tell you that a park is free to visit – most parks are. 4. New York's most concentrated area for a gallery crawl is in Chelsea, mostly in the 20s Streets between 10th and 11th Avenues. 5. City Hall. Home to New York City's government since 1812, City Hall tours take in its cupola-topped marble hall, the governor's room as well as the spot where Abraham Lincoln's coffin lay in state briefly in 1865. 6. 7. 8. 9. 10. 11. 12. 13. 14.

48 Historical Sacred Sites Of The World The creative industries refers to a range of economic activities which are concerned with the generation or exploitation of knowledge & information. They may variously also be referred to as the cultural industries (especially in Europe (Hesmondhalgh 2002, p. 14)) or the creative economy (Howkins 2001). Howkins' creative economy comprises advertising, architecture, art, crafts, design, fashion, film, music, performing arts, More » Venture capital (VC) is financial capital provided to early-stage, high-potential, high risk, growth startup companies. More » International_economics International economics is concerned with the effects upon economic activity of international differences in productive resources & consumer preferences & the international institutions that affect them. More » Joint_venture A joint venture (JV) is a business agreement in which parties agree to develop, for a finite time, a new entity & new assets by contributing equity. More » More »