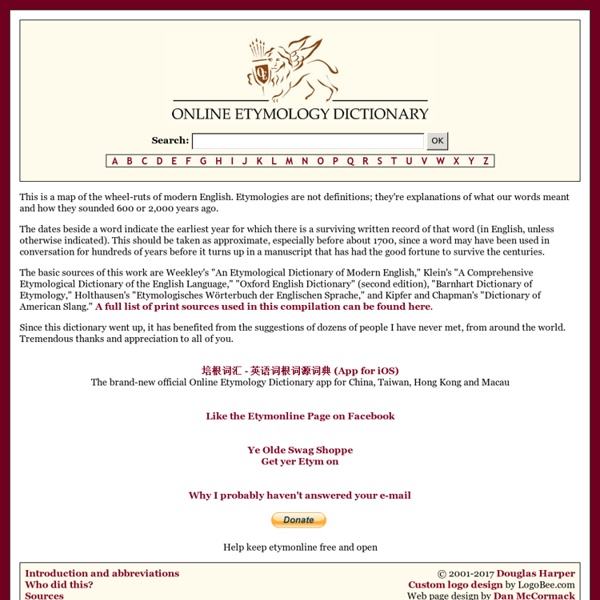 This is a map of the wheel-ruts of modern English. Etymologies are not definitions; they're explanations of what our words meant and how they sounded 600 or 2,000 years ago. The dates beside a word indicate the earliest year for which there is a surviving written record of that word (in English, unless otherwise indicated). This should be taken as approximate, especially before about 1700, since a word may have been used in conversation for hundreds of years before it turns up in a manuscript that has had the good fortune to survive the centuries. The basic sources of this work are Weekley's "An Etymological Dictionary of Modern English," Klein's "A Comprehensive Etymological Dictionary of the English Language," "Oxford English Dictionary" (second edition), "Barnhart Dictionary of Etymology," Holthausen's "Etymologisches Wörterbuch der Englischen Sprache," and Kipfer and Chapman's "Dictionary of American Slang." A full list of print sources used in this compilation can be found here.

Related:  dianemarycowan2 • Vorpal Tools • Languages • i have questions and needs

Convert your image to ICO format Online image converter Create an ICO image from a variety of source formats with this online ICO converter. The maximum size for the ICO format is 256 pixel. If you do not enter an image size, your file will get automatically resized to that image size. So what is there to this Indian Brahmin birdsong pre-oral tradition thing I just heard? I haven’t seen this program but I’ve studied Vedic recitations in some depth. While I personally do not believe that any of the mantras being spoken anywhere are “pre-language” (whatever they mean by that) it probably popped up in this program because it is a pretty important theological point in Sanskritic Brahmin Hinduism. In this context (the status of the Veda varies enormously within Hinduism) the Veda is the Word, the essence of the divine principal that is the fundamental building block of reality; true, unlimited, and eternal. It can be defined with the creator principle that brought forth our present reality and functions as the “divine language” that serves as the blueprint for the universe. When the Creator uttered the Vedic mantras, this brought all of the aspects of creation and the universe into being by calling them forth by name.

Writing Killer Fight Scenes Fight scenes are dangerous territory for writers. On the surface, they seem as if they’re guaranteed to keep the reader glued to the action in the same way as they often do at the movies. In reality, though, readers tend to skip over fight scenes – skimming the long, tedious, blow-by-blow descriptions in favour of getting back to the dialogue and character-driven drama that truly engages them in the story. My novel, Traitor’s Blade, is a swashbuckling fantasy in which fight scenes are a crucial part of the storytelling. This means having to ensure that every piece of action is vital and engaging; it means that every duel must draw the reader in and not let them go until the end. So how do you keep the pacing, flow, and more importantly, the drama moving forward with so many fights?

Top 10 first lines in children's and teen books The boy and the old man arrived at the port at night. That's the first line in my debut novel, Close to the Wind, and I'm rather proud of it. The line doesn't shout out at you, but it does a lot of work establishing the tone of the book and giving you the setting and characters without any fuss. It's always difficult to know how to begin a book.

Animal language Animal language are forms of non-human animal communication that show similarities to human language. Animal communication may be considered complex enough to be called a form of language if: the inventory of signs is large, the signs are relatively arbitrary, and the animals produce them with a degree of volition (as opposed to conditioned instincts). Animal communication can also be evidenced through the use of lexigrams (as used by chimpanzees and bonobos) in addition to signs. 150 Free Textbooks: A Meta Collection Free textbooks (aka open textbooks) written by knowledgable scholars are a relatively new phenomenon. Below, find a meta list of 200 Free Textbooks, and check back often for new additions. Also see our online collection, 1,700 Free Online Courses from Top Universities. Art History A Textbook of the History of Painting by John Charles Van Dyke, Rutgers

Naming Your Novel Note: How careful you have to be naming your novel depends heavily on if you are planning to sell it, and how you are planning to sell it. If you are an unknown who is self-publishing and you want a lot of people to read and buy your novel, you need to do extensive research on the market. This article only covers a few tips, and I am in no way a publishing expert. Cheat Sheets for Writing Body Language Translate emotions into written body language We are always told to use body language in our writing. Sometimes, it's easier said than written. I decided to create these cheat sheets to help you show a character's state of mind. Obviously, a character may exhibit a number of these behaviours.

Yep. Well for the slang in Tokyo. Maybe in Osaka is different..ah ah ah. By the way thanks God there is Google translation around. Actually, a Japanese friend told me that sometime translations have no sense...Hope I haven't create a diplomatic accident...buenas tarde by internationaldev Jan 26

Uhmm, thanks know I got it. So 字源 refers to Word Origin? not only Origin? by jjcamachosanchez Jan 26