Japan TV Stations - Watch Online. JLPT Level Checker - Test your Japanese vocabulary, kanji and grammar. Is the JLPT really worth it? The final countdown to this Sunday’s Japanese Language Proficiency Test (JLPT) has begun, but professionals say piling pressure on examinees might do more harm than good at this point. 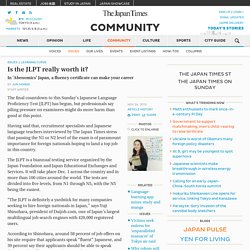 Having said that, recruitment specialists and Japanese language teachers interviewed by The Japan Times stress that passing the N1 or N2 level of the exam is of paramount importance for foreign nationals hoping to land a top job in this country. The JLPT is a biannual testing service organized by the Japan Foundation and Japan Educational Exchanges and Services. It will take place Dec. 1 across the country and in more than 100 cities around the world.

The tests are divided into five levels, from N1 through N5, with the N5 being the easiest. “The JLPT is definitely a yardstick for many companies seeking to hire foreign nationals in Japan,” says Yuji Shinohara, president of Daijob.com, one of Japan’s largest multilingual job search engines with 420,000 registered users. Are there any ways to watch Japanese television online? : japan. Does anyone know where to watch live Japanese TV online? : JapaneseGameShows. Officially Launch of “AbemaTV” Internet TV Station from CyberAgent and TV Asahi. AbemaTV, Inc., established through a joint investment by CyberAgent, Inc. 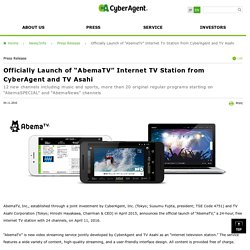 Want to Learn Japanese? Here's how I did it. » Zooming Japan. May192015 People often ask me how I learned Japanese. 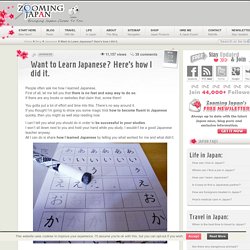 First of all, let me tell you that there is no fast and easy way to do so. If there are any books or websites that claim that, screw them! You gotta put a lot of effort and time into this. There’s no way around it. I can’t tell you what you should do in order to be successful in your studies. Learning Japanese: How it all started I used to do Karate when I was in elementary school. Of course, back then I never thought that one day I’d study Japanese or even move to Japan. Much later, around 1998, when I was into anime and manga, I got motivated to learn a few basic things such as phrases, hiragana and katakana. Fast forward – in university I took basic Japanese lessons for a year or so. But I really wanted to become fluent in Japanese, so whenever I had some time, I browsed through the few books I had back then to study at least a bit. Let me tell you that back in the days it was a lot harder to study Japanese, especially on your own!

How to Learn Kanji, in 10 Steps - Japanese Rule of 7. I don’t go to a lot of cocktail parties. 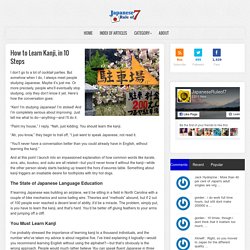 But somehow when I do, I always meet people studying Japanese. Maybe it’s just me. Or more precisely, people who’ll eventually stop studying, only they don’t know it yet. Here’s how the conversation goes: “Ken! “Paint my house,” I reply. “Ah, you know,” they begin to trail off, “I just want to speak Japanese, not read it. “You’ll never have a conversation better than you could already have in English, without learning the kanji.” And at this point I launch into an impassioned explanation of how common words like karate, sora, aku, kuukou, and suku are all related—but you’d never know it without the kanji—while the other person slowly starts backing up toward the hors d’oeuvres table. The State of Japanese Language Education If learning Japanese was building an airplane, we’d be sitting in a field in North Carolina with a couple of bike mechanics and some bailing wire. You Must Learn Kanji. Japanese Rule of 7.