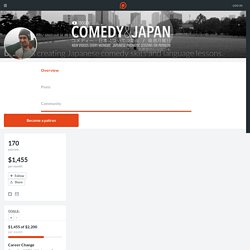 My name is Dogen. I make comedic skits in Japanese on YouTube, and teach Japanese phonetics here on Patreon! American Japanese Episode 1 I began uploading original Japanese content to YouTube in January 2016, with the hopes of eventually using the platform as my primary means of living. In May, a kind individual posted one of my videos in the Learn Japanese Reddit. Tofugu Article:"What we're watching: YouTuber Dogen and his Super Advanced Japanese videos.

Advanced Japanese Lesson 1 Each video introduces a word, phrase, or idea in "Textbook Japanese," a "Common Misconception," and the "Real Japanese. " But our explanation of his jokes are much less funny than the jokes themselves. I currently work full time, and script, shoot, and edit videos during lunch breaks, off days, and late at night. Despite being a fundamental part of the language—and often the defining factor between sounding foreign and native—Japanese pitch-accent is seldom taught in classrooms or textbooks. Japanese Pronunciation for Communication. Figuring out the Difference Between Similar Words. About a year and a half into my studying, I started meeting with a volunteer teacher (in training) to practice Japanese conversation at the local international center in Chiba. 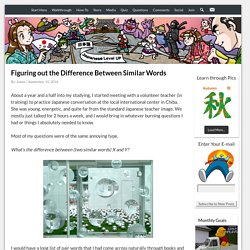 She was young, energetic, and quite far from the standard Japanese teacher image. We mostly just talked for 2 hours a week, and I would bring in whatever burning questions I had or things I absolutely needed to know. Most of my questions were of the same annoying type. What’s the difference between (two similar words) X and Y? I would have a long list of pair words that I had come across naturally through books and TV, which I couldn’t understand the nuance. I soon realized that this was a waste of time. But there are times that curiosity will get the better of you. This simple Google technique (or a variation of) is usually a good solution: (Word 1) と (Word 2) 違い But I’ve also recently found a fun website that makes discovering word differences quite enjoyable. They even have a bit of a sense of humor.

Related posts: 國重友美 オフィシャルサイト eekanji.jp. The Ultimate Guide To Becoming A Japanese Translator - Tofugu. 6 Anime for People Who Don’t Like Anime. Not usually an anime fan? 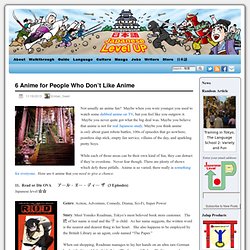 Maybe when you were younger you used to watch some dubbed anime on TV, but you feel like you outgrew it. Maybe you never quite got what the big deal was. Maybe you believe that anime is not for real Japanese study. Maybe you think anime is only about giant robots battles, 100s of episodes that go nowhere, pointless slap stick, empty fan service, villains of the day, and sparkling pretty boys.

While each of those areas can be their own kind of fun, they can detract if they’re overdone. 11. Genre: Action, Adventure, Comedy, Drama, Sci-Fi, Super Power Story: Meet Yomiko Readman, Tokyo’s most beloved book store customer. When out shopping, Readman manages to lay her hands on an ultra rare German book, “die Unsterbliche Liebe” (or “The Immortal Beloved”). We then travel to the British Library HQ and learn more about her world.

Why you should give this anime a chance: ROD packs quite a punch in its 90 minutes run time. 12. Japanese Reading Practice For Beginners. Of course, there are plenty of resource out there to help intermediate and advanced learners of Japanese to practice their reading. 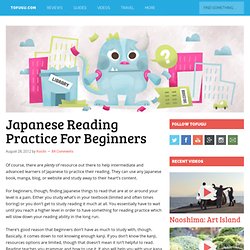 They can use any Japanese book, manga, blog, or website and study away to their heart’s content. For beginners, though, finding Japanese things to read that are at or around your level is a pain. Either you study what’s in your textbook (limited and often times boring) or you don’t get to study reading it much at all. You essentially have to wait until you reach a higher level in order to have something for reading practice which will slow down your reading ability in the long run. There’s good reason that beginners don’t have as much to study with, though. Since it’s normally pretty hard for beginners to find reading resources (and because I get this email like every day, it seems), I thought it would be good to put together a list of resources for beginners to study with. Have fun! 漫画の新聞 マンガで読むニュース. NPO多言語多読.