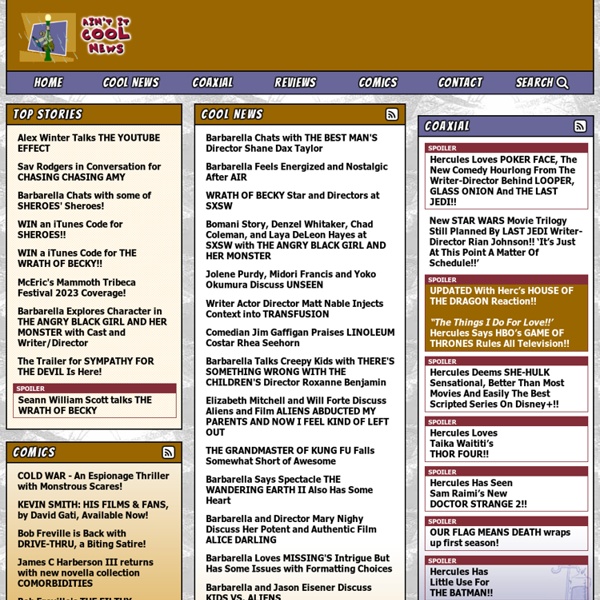 Random Stuff This is the best advert you will see for a very long time. Wonder how long this stays up? Sheer brilliance by Mr Brilliant. In Contention — Film Awards – Film Festivals – Interviews – Film Reviews – Movie News There is no press release planned for this news but I wanted to pass it along to our readership in any case. After seven years of owning and operating In Contention, first as a blogspot thingamajig, then guiding the .com forward as (I think) one of the preeminent awards season outlets in the space, I’m happy to announce that our little company has been formally acquired by HitFix. The final signatures were committed to paper just after Telluride, which is serendipitous as at last year’s fest, just before the premiere of “Albert Nobbs,” Greg Ellwood first bent my ear and told me his ideas. Then, three swift weeks later — a year ago today, in fact — we officially hitched our wagon to HitFix. These last 12 months have been kind of a trial run, if you will.

Independent Movies, Film Festivals, New Movies Reviews, News and Interviews - Film Threat IMDb Faced with cuts internal communication is even more important With budget cuts starting to bite, 2011 will be a year of significant change for local government. But for those working for councils this change is causing understandable anxiety, with many fearing for their jobs and concerned about the state of services in the future. That's why it's more important than ever that local authorities work to keep their staff informed and engaged. Internal communications used to mean a staff newsletter and the occasional bulletin sent to managers. But in recent years – and led by the LGA's Reputation campaign – councils have realised the value of employee engagement, and the role communication plays in delivering this.Good internal communication builds a committed and high-performing workforce that is focused on achieving the council's goals.

First Pics Of André 3000 As Jimi Hendrix - Films It was just a few weeks back when news broke that André 3000 was going to play rock legend Jimi Hendrix in a new biopic. It seems as if the project is moving rather swiftly as pictures have just emerged of the Outkast frontman on set in almost-full costume. The film, called All Is By My Side, focuses on the late sixties when Hendrix was originally discovered and his ensuing time in London. It's currently being shot in Dublin. Whether or not the film will include any actual Hendrix music is still unsure following various legal difficulties with his estate. They're going to need to sort that out...

Conspiracy Theorist conspiracy theorist » Bush and His Aides Made 935 False Statements about Iraq In the 2 Years After 9/11 Given the Republican obsession with Benghazi talking points, it’s time for a very specific flashback. “The Satanic Verses,” the Fatwa, and a Life Changed Afterward, when the world was exploding around him, he felt annoyed with himself for having forgotten the name of the BBC reporter who told him that his old life was over and a new, darker existence was about to begin. She called him at home, on his private line, without explaining how she got the number. “How does it feel,” she asked him, “to know that you have just been sentenced to death by Ayatollah Khomeini?” It was a sunny Tuesday in London, but the question shut out the light. This is what he said, without really knowing what he was saying: “It doesn’t feel good.”

About - Serial On January 13, 1999, a girl named Hae Min Lee, a senior at Woodlawn High School in Baltimore County, Maryland, disappeared. A month later, her body turned up in a city park. She'd been strangled. Her 17-year-old ex-boyfriend, Adnan Syed, was arrested for the crime, and within a year, he was convicted and sentenced to spend the rest of his life in prison.

Charlie Hebdo investigator took own life hours after attack: report The Associated Press, Paris Wednesday, 14 January 2015 France ordered prosecutors around the country to crack down on hate speech, anti-Semitism and glorifying terrorism, announcing Wednesday that 54 people had been arrested for those offenses since terror attacks left 20 dead in Paris last week, including three gunmen. The order came as Charlie Hebdo’s defiant new issue sold out before dawn around Paris, with scuffles at kiosks over dwindling copies of the satirical newspaper that fronted the Prophet Muhammad anew on its cover. France has been tightening security and searching for accomplices since the terror attacks began, but none of the 54 people have been linked to the attacks.

What is a Wiki War? Essentially a wiki war is an ‘edit war’ that occurs on Wikipedia. It happens when editors disagree on article content. The ‘war’ is when many points of view engage in three dimensional chess strategies with each other using Wikipedia policies or admin support to block editing permissions to those with opposing viewpoints, or how veteran Wikipedia contributor David Gerard puts it – “battles to the death for insanely low stakes”. It can be a seriously nasty business, and I’m skeptical that the stakes are so small. The general public is not aware what serious business it can be, because these activities are ‘buried out in the open’ in WikiMedia’s software system.