To Kill a Mockingbird

To kill a mockingbird. [FERGUSON FORWARD] DeRay McKesson: He, the Protestor. DeRay McKesson has become one of the most visible faces of the Ferguson resistance movement, despite the fact that he’s a Baltimore native. 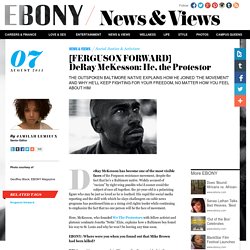 Widely accused of “racism” by right wing pundits who’d sooner avoid the subject of race all together, the 30-year-old is a polarizing figure who may be just as loved as he is loathed. His rapid fire social media reporting and the skill with which he slays challengers on cable news programs has positioned him as a rising civil rights leader while continuing to emphasize the fact that no one person will be the face of movement. Here, McKesson, who founded We The Protestors with fellow activist and platonic soulmate Jonetta “Netta” Elzie, explains how a Baltimore boy found his way to St. Louis and why he won’t be leaving any time soon. EBONY: Where were you when you found out that Mike Brown had been killed? DM: I was sitting on my couch in Minneapolis. EBONY: How did you meet Netta? 'We do this for Mike Brown': a year on, Ferguson is a wound that won't heal. An unarmed black man is shot dead by a white police officer following a brief struggle at a car in a midwestern American city in the summertime. 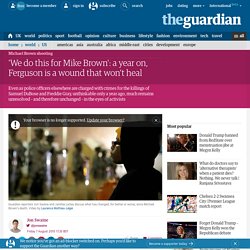 The police tell one version; his friends and family give another. But this year the script was not the same. The reaction to the killing last month of Samuel DuBose in Cincinnati suggested that so much had changed since the death of Michael Brown in Ferguson, Missouri, last August. Officer Ray Tensing’s false claim that DuBose dragged him along the street with his car before being shot in the head was met with public scepticism and cautious media coverage.

Authorities promptly released damning video footage from police body cameras. By then, Cincinnati police chief Jeffrey Blackwell had articulated the thinking behind this brisk and apologetic response. Such responses would have been unthinkable a year ago, before the extraordinary fallout from the fatal shooting in Ferguson of 18-year-old Brown, the first anniversary of which falls on Sunday. 'The book that taught me how to read': your stories about To Kill a Mockingbird. What better time to revisit the lessons and impressions of To Kill a Mockingbird than while we wait for Harper Lee’s new novel, Go Set a Watchman – coming out this Tuesday, in case you missed it. 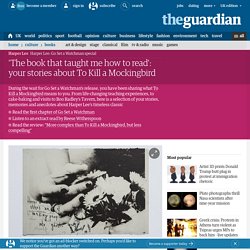 Here is a selection of our readers’ memories and stories about the classic – you can see them all, and contribute your own, here. The man on the train understood “I was reading To Kill a Mockingbird on the train en route to a university open day. I got to the scene where Atticus walks out of the courtroom, and Scout is told to stand up along with the rest of the public gallery, and I broke down in tears. I must have looked an absolute sight, because the man in a business suit opposite me asked me if I was all right. The first time I felt grown up “To Kill a Mockingbird was the first book I can remember reading and actually comprehending.

Boo Radley’s Tavern My favourite novel to teach in high school English “I first read the novel when I was preparing to teach it twenty years ago. By VitaM. What happens now to people and businesses named after Atticus Finch? Atticus topped the 2011 list of baby names inspired by characters in novels – ahead of Darcy, Holden and Gatsby – but its star is waning. 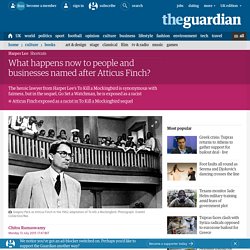 The reviews of Harper Lee’s Go Set a Watchman are out, and the response has been one of dismay. Literature’s great moral conscience has been corrupted. The character once voted the greatest hero of American film may in fact be a villain. In Go Set a Watchman – written before To Kill a Mockingbird, but published 50 years after it – Atticus Finch is a racist, a bigot and a segregationist, a man who says things like “the negroes down here are still in their childhood as a people”. Would you name your child after this man? Many have already done so. In the New York Times review of Go Set a Watchman, Michiko Kakutani describes Finch as “the perfect man … In real life, people named their children after Atticus.

An internet search for Atticuses (Attici?) Eventually I track down Atticus Ingram Rowe from Cape Cod. And how does Lewis feel about her hero now?