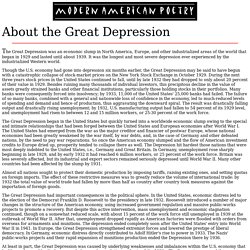 It was the longest and most severe depression ever experienced by the industrialized Western world. Though the U.S. economy had gone into depression six months earlier, the Great Depression may be said to have begun with a catastrophic collapse of stock-market prices on the New York Stock Exchange in October 1929. During the next three years stock prices in the United States continued to fall, until by late 1932 they had dropped to only about 20 percent of their value in 1929.

Besides ruining many thousands of individual investors, this precipitous decline in the value of assets greatly strained banks and other financial institutions, particularly those holding stocks in their portfolios. The Great Depression had important consequences in the political sphere. Source. Scottsboro Boys Trial: Profiles in Courage.

In an August 1960 book review, The Atlantic Monthly’s Phoebe Adams described To Kill A Mockingbird as “sugar-water served with humor ...” 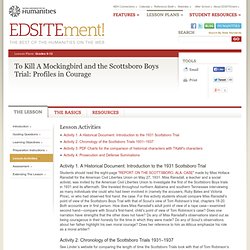 Sugar-water? Far from it. Harper Lee’s To Kill A Mockingbird highlights instances of heroism and courage in a small Alabama town riddled with the poverty and racial tensions characteristic of the south in 1935. The novel focuses on the Finch family over the course of two years—lawyer and father Atticus Finch; his ten-year-old son, Jem; and his six-year-old daughter, Jean Louise, aka Scout. Scout serves as the narrator of the book; her narration is based on her memories of the events leading up to, during, and after her father’s defense of a black man, Tom Robinson, accused of raping a white woman, Mayella Ewell.

In short, To Kill A Mockingbird reveals the heroic nature of acting with moral courage when adhering to social mores would be far less dangerous. Scottsboro: An American Tragedy. Monroeville Alabama, To Catch a Mockingbird. "Top secret," Mr. 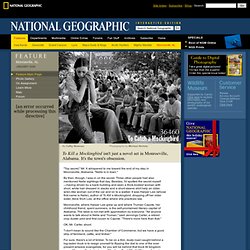 X whispered to me toward the end of my stay in Monroeville, Alabama. "Nelle is in town. " By then, though, I was in on the secret. Three other people had also mentioned Nelle sightings that day. Besides, I'd spotted the secret myself—having driven by a bank building and seen a thick-bodied woman with short, white hair dressed in slacks and a short-sleeve shirt help an older, wren-like woman out of the car and on to a walker. Monroeville, where Harper Lee grew up and where Truman Capote, her childhood friend, spent summers, is the self-proclaimed literary capital of Alabama. OK, Mr. "I don't mean to sound like the Chamber of Commerce, but we have a good strip of farmland, cattle, and timber.

" For sure, there's a lot of timber. But timber, cotton, and churches do not draw 30,000 visitors a year. Setting - Links to the Novel's Time & Place. The Trials of The Scottsboro Boys. Bible Belt. The area roughly considered to constitute the Bible Belt The Bible Belt is an informal term for a region in the south-eastern and south-central United States in which socially conservative evangelical Protestantism is a significant part of the culture and Christian church attendance across the denominations is generally higher than the nation's average. 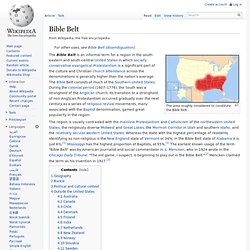 The Bible Belt consists of much of the Southern United States. During the colonial period (1607–1776), the South was a stronghold of the Anglican church. Its transition to a stronghold of non-Anglican Protestantism occurred gradually over the next century as a series of religious revival movements, many associated with the Baptist denomination, gained great popularity in the region. Geography[edit] The name "Bible Belt" has been applied historically to the South and parts of the Midwest, but is more commonly identified with the South. Buckle[edit] This billboard near the center of Alabama encourages people to go to church. Australia[edit]