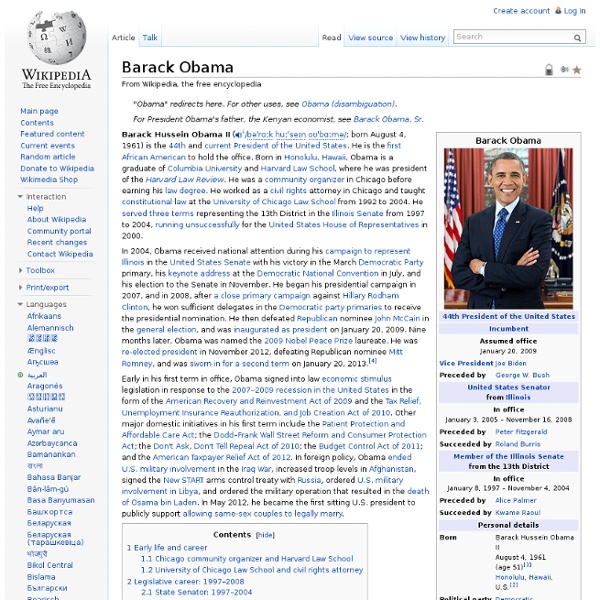 Barack Hussein Obama II ( i/bəˈrɑːk huːˈseɪn oʊˈbɑːmə/; born August 4, 1961) is the 44th and current President of the United States, and the first African American to hold the office. Born in Honolulu, Hawaii, Obama is a graduate of Columbia University and Harvard Law School, where he served as president of the Harvard Law Review. Obama was re-elected president in November 2012, defeating Republican nominee Mitt Romney, and was sworn in for a second term on January 20, 2013. Early life and career Obama was born on August 4, 1961,[1] at Kapiʻolani Maternity & Gynecological Hospital (now Kapiʻolani Medical Center for Women and Children) in Honolulu, Hawaii,[2][3][4] and would become the first President to have been born in Hawaii.[5] His mother, Stanley Ann Dunham, was born in Wichita, Kansas, and was of mostly English ancestry.[6] His father, Barack Obama, Sr., was a Luo from Nyang’oma Kogelo, Kenya. Community organizer and Harvard Law School Legislative career: 1997–2008 Related:  sheshraorathod

Boston Marathon bombings On April 15, 2013, two pressure cooker bombs exploded during the Boston Marathon at 2:49 pm EDT, killing 3 people and injuring an estimated 264 others.[3] The bombs exploded about 12 seconds and 210 yards (190 m) apart, near the finish line on Boylston Street.[2][8] The Federal Bureau of Investigation (FBI) took over the investigation, and on April 18, released photographs and surveillance video of two suspects.[9][10][11] The suspects were identified later that day as Chechen brothers Dzhokhar and Tamerlan Tsarnaev. Shortly after the FBI released the images, the suspects allegedly killed an MIT police officer, carjacked an SUV, and initiated an exchange of gunfire with the police in Watertown, Massachusetts. Bombings[edit] The blasts (red) occurred near the finish line, along the marathon course (dark blue), the first nearer than the second. Casualties and initial response[edit] Police and other emergency workers on the scene The marathon was halted abruptly. Investigation[edit]

Kate Sheppard Katherine Wilson Sheppard, also known as Kate, (10 March 1847 – 13 July 1934)[a] was the most prominent member of New Zealand's women's suffrage (the movement to allow women to vote in New Zealand), and is the country's most famous suffragette. She also appears on the NZ ten dollar note. Because New Zealand was the first country to introduce universal suffrage, Sheppard's work had a considerable impact on women's suffrage movements in other countries. Early life[edit] Kate Sheppard was born Catherine Wilson Malcolm in Liverpool, England to Scottish parents Jem Crawford Souter and Andrew Will Malcolm. In 1885, Kate Sheppard became involved in establishing the New Zealand Women's Christian Temperance Union, part of the larger temperance movement. Woman's suffrage movement[edit] Discovering that much of the support for moderation came from women, the Temperance Union increasingly became active in advocating the cause of women's suffrage, an area in which Sheppard quickly became prominent.

George W. Bush Bush left office in 2009, and has since returned to Texas and purchased a home in a suburban area of Dallas. He is currently a public speaker, and has written a memoir, Decision Points.[16] His presidential library was opened in 2013. Childhood to mid-life Early life and education George W. George Walker Bush was born on July 6, 1946, at Grace-New Haven Hospital (now Yale–New Haven Hospital) in New Haven, Connecticut,[17] as the first child of George Herbert Walker Bush and Barbara Pierce. Bush attended public schools in Midland, Texas, until the family moved to Houston after he had completed seventh grade. Beginning in the fall of 1973, Bush attended the Harvard Business School, where he earned an M.B.A. degree. Texas Air National Guard In late 1972 and early 1973, he drilled with the 187th Fighter Wing of the Alabama Air National Guard, having moved to Montgomery, Alabama, to work on the unsuccessful U.S. Marriage, family, and personal life Early career, 1978–95 George W. Primary George W.

Frank Sinatra - Singer, Film Actor, Actor Frank Sinatra was one of the most popular entertainers of the 20th century, forging a career as an award-winning singer and film actor. Synopsis Born in Hoboken, New Jersey, on December 12, 1915, Frank Sinatra rose to fame singing big band numbers. Early Life and Career Francis Albert "Frank" Sinatra was born on December 12, 1915, in Hoboken, New Jersey. Solo Artist Between 1943 and 1946, Sinatra's solo career blossomed as the singer charted a slew of hit singles. Sinatra made his movie acting debut in 1943 with the films Reveille With Beverley and Higher and Higher. Having regained stardom, Sinatra enjoyed continued success in both movies and music for years to come. Rat Pack and No. 1 Tunes By the mid-1960s, Sinatra was back on top again. The Rat Pack made several films during their heyday: the famed Ocean's Eleven (1960), Sergeants Three (1962), Four for Texas (1963) and Robin and the Seven Hoods (1964). Personal Life Frank Sinatra married childhood sweetheart Nancy Barbato in 1939.

Eric Holder Eric Himpton Holder, Jr. (born January 21, 1951) is the 82nd Attorney General of the United States, in office since 2009. Holder, serving in the administration of President Barack Obama, is the first African American to hold the position of U.S. Attorney General.[1] As a result of the Fast and Furious investigation, he became the only cabinet member in US history to be held in contempt of Congress.[2] Early life[edit] Eric Himpton Holder, Jr. was born in the Bronx, New York, to parents with roots in Barbados.[3][4][dead link][5] Holder's father, Eric Himpton Holder, Sr. (1905–1970) was born in Saint Joseph, Barbados and arrived in the United States at the age of 11.[6][7] He later became a real estate broker. Career[edit] After graduating from law school, Holder joined the U.S. Holder stepped down from the bench in 1993 to accept an appointment as United States Attorney for the District of Columbia from President Bill Clinton. Deputy Attorney General[edit] Private practice[edit]

David Shearer David James Shearer, MBE (born 28 July 1957) is a New Zealand politician and former United Nations worker. He spent nearly 20 years working for the UN, managing the provision of aid to countries including Somalia, Rwanda, Liberia, Kosovo, Afghanistan, Lebanon and Iraq.[1] In 1992 Shearer was named (together with his wife) as New Zealander of the Year by the New Zealand Herald.[2] The following year he was appointed as Member of the British Empire (MBE) in the British New Years Honours list. In 2009 he won the Mount Albert by-election becoming a Member of the Parliament of New Zealand for the Labour Party. Early life[edit] Shearer was born and brought up in the Auckland suburb of Papatoetoe. Public service and Non-Government Organisation career[edit] In March 2013 Shearer admitted he hadn't declared a US-based bank account in which he received his salary from the UN, saying he had simply forgotten about it.[6] Member of Parliament[edit] Opposition leader[edit] Personal achievements[edit]

Bill Clinton Born and raised in Arkansas, Clinton became a student leader and a skilled musician. He is an alumnus of Georgetown University, where he was a member of Kappa Kappa Psi and Phi Beta Kappa and earned a Rhodes Scholarship to attend the University of Oxford. He is married to Hillary Rodham Clinton, who served as United States Secretary of State from 2009 to 2013 and who was a Senator from New York from 2001 to 2009. Both Clintons earned law degrees from Yale Law School, where they met and began dating. As Governor of Arkansas, Clinton overhauled the state's education system, and served as Chair of the National Governors Association. Early life and career William Jefferson Blythe III, in 1950 at age four "Sometime in my sixteenth year, I decided I wanted to be in public life as an elected official. Clinton has named two influential moments in his life that contributed to his decision to become a public figure, both occurring in 1963. College and law school years Georgetown University Law school