A new approach to China 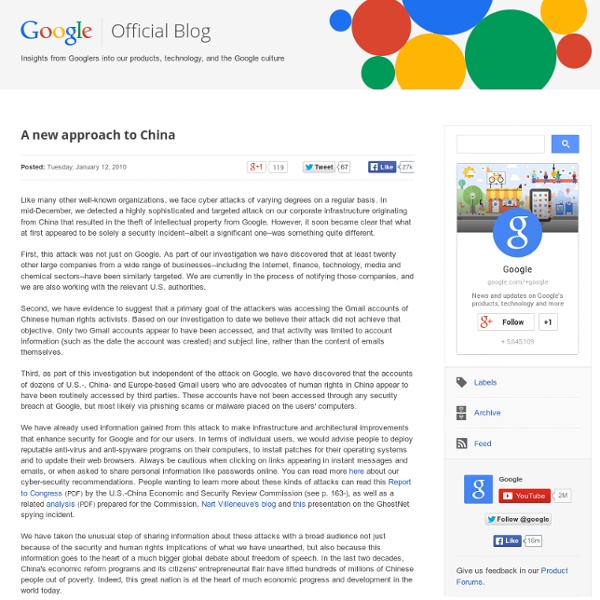 Like many other well-known organizations, we face cyber attacks of varying degrees on a regular basis. In mid-December, we detected a highly sophisticated and targeted attack on our corporate infrastructure originating from China that resulted in the theft of intellectual property from Google. However, it soon became clear that what at first appeared to be solely a security incident--albeit a significant one--was something quite different. First, this attack was not just on Google. As part of our investigation we have discovered that at least twenty other large companies from a wide range of businesses--including the Internet, finance, technology, media and chemical sectors--have been similarly targeted. We are currently in the process of notifying those companies, and we are also working with the relevant U.S. authorities. Second, we have evidence to suggest that a primary goal of the attackers was accessing the Gmail accounts of Chinese human rights activists.

Google vs China: the Chinese reaction so far 13 January '10, 02:19pm Follow When Google issued its “Stop censoring us or we quit your country” announcement, it was a bold and unexpected move. So, how have the Chinese responded? Google password system was target of Chinese hackers Google's internal system which lets people access its services via a single password was the target of the Chinese hacking attack last December that led the company to withdraw from the mainland, according to the New York Times. The system, known internally as "Gaia" – after the overarching planetary consciousness posited by James Lovelock – is behind the interface which lets not just users but also Google developers to log in and gain access to the company's resources. Millions of people use that interface to access documents and email from anywhere in the world using Google's "cloud" services. However, users' passwords have not been compromised: Google is understood to follow standard security practice, by which passwords are only stored in encrypted form known as a "hash". When a user logs in, the password they supply is encrypted using the same method and compared to the hash.

10 Things I Think I Think About 2010 We all do this. With the year coming to a close we all think forward and prognosticate about what the future will hold. To call 2009 an amazing year for our industry would be an enormous understatement. We’re going to see even more progress in 2010. So with that, I want to share with you the 10 things I think I think about 2010: 10. U.S. Internet Providers and the 'Great Firewall of China' Authors: Robert McMahon, Editor, and Isabella Bennett, Program Coordinator, International Institutions and Global Governance Updated: February 23, 2011 Introduction The operations of U.S. Internet companies in China are attracting concern in Congress after years of complaints from free speech and human rights advocates about these firms aiding Beijing's ability to censor content. Trade liberalization has sent China's economy booming, making it an attractive—even essential—market for U.S. companies to enter.

Reputation Is Dead: It’s Time To Overlook Our Indiscretions Trying to control, or even manage, your online reputation is becoming increasingly difficult. And much like the fight by big labels against the illegal sharing of music, it will soon become pointless to even try. It’s time we all just give up on the small fights and become more accepting of the indiscretions of our fellow humans. Because the skeletons are coming out of the closet and onto the front porch.

Google Threatening To Leave China Over Hacking, Email Leak UPDATE 4:31 PM ET: Get latest updates on Google's China developments on our liveblog here. SAN FRANCISCO — Google Inc. will stop censoring its search results in China and may pull out of the country after discovering that computers hackers had tricked human rights activists into opening their e-mail accounts to outsiders. The change-of-heart announced Tuesday heralds a major shift for Google, which has repeatedly said it will obey Chinese laws that require some politically and socially sensitive issues to be blocked from search results that are available in other countries Google disclosed in a blog post that it had detected a "highly sophisticated and targeted attack on our corporate infrastructure originating from China." Further investigation revealed that "a primary goal of the attackers was accessing the Gmail accounts of Chinese human rights activists," Google said in the post written by Chief Legal Officer David Drummond. Google did not specifically accuse the Chinese government.

50 Cool Search Engines for Serious Readers The Internet has proven itself as a valuable resource for all types of readers, from collectors of rare books to tech-minded readers who shop, network and download books online. But if you’re having trouble finding exactly what you need, whether it’s a book review, a book by a certain author, or a digitized anthology for your class at an online college for creative writing, you’ll want to use sophisticated tools that direct you to high-quality resources. Here are 50 cool search engines for serious readers and students. For even more great search engines, read our updated list. Anonymous wants to take down the Great Firewall of China Last week, I wrote about how the hacktivist group Anonymous has a new Chinese branch, Anonymous China, which has been very active since it launched its Twitter account on March 30, 2012. The group has hacked and defaced hundreds of Chinese government, company, and other general websites to the point where China even acknowledged the attacks. The hacking has continued against various websites, but even more importantly, the group has declared a new target: the so-called Great Firewall of China. Since my last two reports, Anonymous China has hacked shangzhi.gov.cn, publicly posting eight user names and passwords on Pastebay.

Just two Chinese ISPs serve 20% of world broadband users If you need a reminder of just how big China is—and just how important the Internet has become there—consider this stat: between them, two Chinese ISPs serve 20 percent of all broadband subscribers in the entire world. Telegeography has updated its world Internet service provider database and finds that the sheer scale of China dwarfs just about everyone else. China Telecom is the largest ISP in the world, with 55 million subscibers.

Yahoo Drawn Into Google's Cyber War With China Yahoo (YHOO) was drawn into the growing international cyber-war between Google (GOOG) and the Chinese government Saturday after it declared its support of the U.S.-based search giant. Google threatened to pull out of China after it became the victim of a massive cyber attack that is believed to be masterminded by the Chinese government. Now several other U.S. companies are also believed to have been victims of a similar attack, including Yahoo.Yahoo said it is "aligned with Google" in its rebuke of Chinese censorship, and condemned "any attempts to infiltrate company networks to obtain user information."

Feeding Greed - a major pastime So this is Christmas! I haven't been on for a while and now, in the late evening of Christmas day, I have a strange feeling of forebodance which urges me to write. A feeling born, I'm certain, out of nothing in particular but more from something general and omni-present. 2009 has been a very tough year for many of us and the troubles are not over yet. Google Confronts the Great Firewall - By Rebecca MacKinnon For centuries, the Yangtze River -- the longest in Asia -- has played an important role in China's history, culture, and economy. The Yangtze is as quintessentially Chinese as the Nile is Egyptian or the Rhine is German. Many businesses use its name.

The Web Is Dead. Long Live the Internet Two decades after its birth, the World Wide Web is in decline, as simpler, sleeker services — think apps — are less about the searching and more about the getting. Chris Anderson explains how this new paradigm reflects the inevitable course of capitalism. And Michael Wolff explains why the new breed of media titan is forsaking the Web for more promising (and profitable) pastures. Who’s to Blame: Us