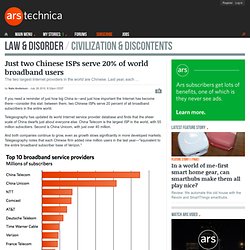 Telegeography has updated its world Internet service provider database and finds that the sheer scale of China dwarfs just about everyone else. China Telecom is the largest ISP in the world, with 55 million subscibers. Second is China Unicom, with just over 40 million. And both companies continue to grow, even as growth slows significantly in more developed markets. Telegeography notes that each Chinese firm added nine million users in the last year—"equivalent to the entire broadband subscriber base of Verizon. " AOL Fires A Ton Of Freelancers, HuffPost Doesn’t Pay Most Of Its Writers. I Approve. Can anyone else hear that? 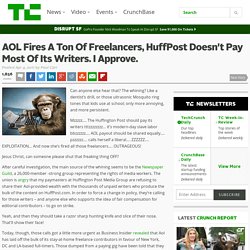 The whining? Like a dentist’s drill, or those ultrasonic Mosquito ring tones that kids use at school; only more annoying, and more persistent. Mzzzzz…. The Huffington Post should pay its writers tttzzzzzzzz… it’s modern-day slave labor bbzzzzzz…. AOL payout should be shared equally…. pzzzzzz…. calls herself a liberal…. Jesus Christ, can someone please shut that freaking thing OFF? Wikipedia’s Jimmy Wales: App stores a clear and present danger. The app store model is a more immediate threat to internet freedom than breaches of net neutrality. 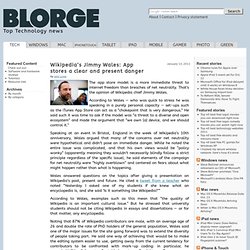 That’s the opinion of Wikipedia chief Jimmy Wales. According to Wales — who was quick to stress he was speaking in a purely personal capacity — set-ups such as the iTunes App Store can act as a “chokepoint that is very dangerous.” He said such it was time to ask if the model was “a threat to a diverse and open ecosystem” and made the argument that “we own [a] device, and we should control it.” Speaking at an event in Bristol, England in the week of Wikipedia’s 10th anniversary, Wales argued that many of the concerns over net neutrality were hypothetical and didn’t pose an immediate danger. Facebook a fait mieux que Google Internet Actualité - Echos du N. Web Kills the Radio Stars ? A new approach to China. Like many other well-known organizations, we face cyber attacks of varying degrees on a regular basis. 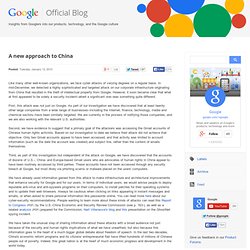 In mid-December, we detected a highly sophisticated and targeted attack on our corporate infrastructure originating from China that resulted in the theft of intellectual property from Google. However, it soon became clear that what at first appeared to be solely a security incident--albeit a significant one--was something quite different. First, this attack was not just on Google. As part of our investigation we have discovered that at least twenty other large companies from a wide range of businesses--including the Internet, finance, technology, media and chemical sectors--have been similarly targeted.

We are currently in the process of notifying those companies, and we are also working with the relevant U.S. authorities. Reputation Is Dead: It’s Time To Overlook Our Indiscretions. Trying to control, or even manage, your online reputation is becoming increasingly difficult. 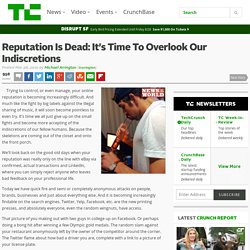 And much like the fight by big labels against the illegal sharing of music, it will soon become pointless to even try. It’s time we all just give up on the small fights and become more accepting of the indiscretions of our fellow humans. Because the skeletons are coming out of the closet and onto the front porch. We’ll look back on the good old days when your reputation was really only on the line with eBay via confirmed, actual transactions and LinkedIn, where you can simply reject anyone who leaves bad feedback on your professional life. Today we have quick fire and semi or completely anonymous attacks on people, brands, businesses and just about everything else. Google vs China: the Chinese reaction so far. 13 January '10, 02:19pm Follow When Google issued its “Stop censoring us or we quit your country” announcement, it was a bold and unexpected move. 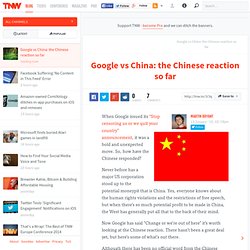 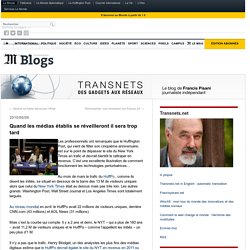 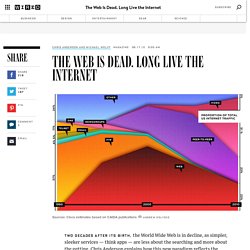 Chris Anderson explains how this new paradigm reflects the inevitable course of capitalism.