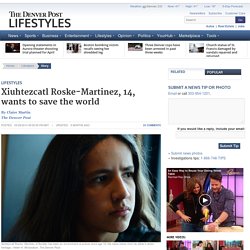 Enter his name — an Aztec word pronounced "Shu-TEZ-caht" — on a search engine, and nearly 5,000 results pop up. He has given TED talks about his work as a leader of Earth Guardians, a worldwide organization of conservation-minded children and young adults. Last fall, he was invited to speak about the global water crisis at the United Nations. His "What the Frack" hip-hop video, a catchy anti-fracking song, has more than 2,000 views. Roske-Martinez, with mom-activist Tamara Roske, says he's been criticized for his views, "but this is why I speak on issues that directly determine the kind of world we will inherit. " By age 12, Roske-Martinez had organized more than 35 rallies and protests, and co-organized the biggest iMatter youth march, with more than 2,000 participants. Boulder City Council members know him well. The 14-Year-Old Voice of the Climate Change Generation. 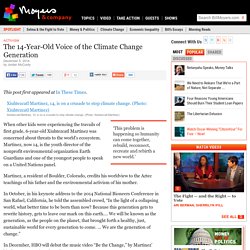 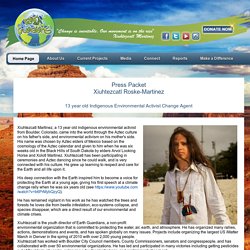 His name was chosen by Aztec elders of Mexico based on the cosmology of the Aztec calendar and given to him when he was six weeks old in the Black Hills of South Dakota by elders Arvol Looking Horse and Xolotl Martinez. Xiuhtezcatl has been participating in ceremonies and Aztec dancing since he could walk, and is very connected with his culture. He grew up learning to respect and care for the Earth and all life upon it. His deep connection with the Earth inspired him to become a voice for protecting the Earth at a young age, giving his first speech at a climate change rally when he was six years old (see Xiuhtezcatl is the youth director of Earth Guardians, a non-profit environmental organization that is committed to protecting the water, air, earth, and atmosphere. Teens Sue Government for Failing to Address Climate Change for Future Generations.

Many young people feel they have too much at stake to wait for our leaders to get their act together and take meaningful action on climate change. 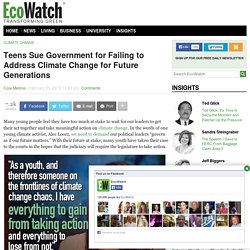 In the words of one young climate activist, Alec Loorz, we need to demand our political leaders “govern as if our future matters.” With their future at stake, many youth have taken their case to the courts in the hopes that the judiciary will require the legislature to take action. “We are all in imminent danger,” Loorz, who founded the nonprofit Kids vs. Global Warming, told Outside Magazine. “Scientists have said we have 10 years to make changes if we want to stabilize the climate by 2100—and that was back in 2005 … We care more about money and power than we do about future generations. On Bill Moyer’s show last month, Mary Christina Wood, law professor at the University of Oregon and author of Nature’s Trust: Environmental Law for a New Ecological Age, explains what is being called the “Children’s Climate Crusade.”

Teen Activist Walks Across America for Climate Action. Are you tired of hearing how apathetic young people are? 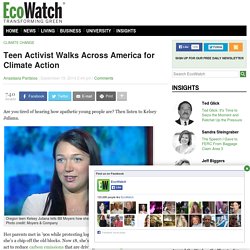 Then listen to Kelsey Juliana. Her parents met in ’90s while protesting logging in Oregon’s old-growth forests, and she’s a chip off the old blocks. Now 18, she’s a plaintiff in a lawsuit to force Oregon to act to reduce carbon emissions that are driving climate change. She’ll be in New York City for the People’s Climate March but she’s in the midst of a longer walk. She’s joined other environmental activists in the Great March for Climate Action, which stepped off in Los Angeles on March 1 and winds up in Washington D.C. on Nov. 1. Juliana talked to Bill Moyers on this week’s edition of Moyers & Company to explain why she’s so devoted to saving the planet. “You don’t have to call yourself an activist to act,” she says on the segment. The People’s Climate March: A Time Where ‘We’ Can Make a Difference Naomi Klein on Democracy Now!