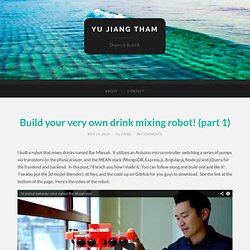 It utilizes an Arduino microcontroller switching a series of pumps via transistors on the physical layer, and the MEAN stack (MongoDB, Express.js, Angular.js, Node.js) and jQuery for the frontend and backend. In this post, I’ll teach you how I made it. You can follow along and build one just like it! I’ve also put the 3d model (blender), stl files, and the code up on GitHub for you guys to download. See the link at the bottom of the page. Navigation: First, a little bit more about the robot. Other tools required for the job are: a hacksaw to cut two of the 12″ rods in half, a wire stripper, soldering iron, and solder to connect the wire to the pin connectors and coaxial power connector, and a multimeter to check your work. For the first part of this tutorial, I’ll focus on the 3d model, printing, and assembling the physical robot. The physical design of Bar Mixvah around the usage of 5/16″x12″ steel rods. What is a peristaltic pump? Wirelessly Control A Robot Using Arduino and RF Modules !

The sensors is using Nordic Semiconductors transceiver nRF24L01 for wireless data transmissions. The Arduino Vera plugin automatically creates the sensor devices it finds on the radio network. Creating your own sensors should be pretty simple using the supplied Arduino library and example sensor sketches. Arduino is an open source hardware prototype board that have lots of both digital and analog IO pins. Link Arduino page: ​ Relevant forum thread: ​ All the components developed and compiled here are Open Source. Architecture ¶ The sensor network can consist of up to 255 radio nodes. Author ¶ Henrik Ekblad - henrik.ekblad at gmail.com (hek on forum) Arduino Sketches and Vera Plugin ¶ A sketch is a small program that you download to the Arduino boards.

Also make sure to install all Arduino libraries I've created and collected here before trying to build the sensor sketches below. ​ Sensors ¶ Components. In the following section we'll describe the various building blocks that comprise a wireless sensor [don't worry...there aren't too many]. 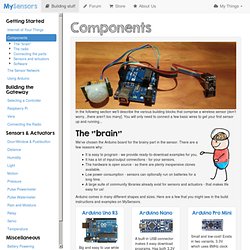 You will only need to connect a few basic wires to get your first sensor up and running... Arduino Project: Cheap Wireless 433Mhz Transmitter and Receivers. Automated Window Blinds with Arduino. And The Final Product is Here! 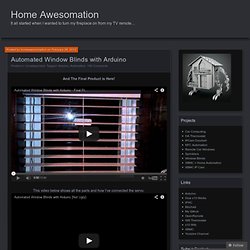 This video below shows all the parts and how I’ve connected the servo. This is the pull string for “manual” control Well the fun keeps on coming, and by now you should see that the running theme in my world is many competing projects. Which is why you’ll often see me post new cool stuff before I properly tie off the loose ends with existing stuff. So for that I apologize for not completing many tutorials and postings of source code.

Annnyway stand back witness a very cool project that literally took me less than an hour to prototype. There are solutions available but clearly the other theme to my blog is cheap. I successfully converted existing blinds in my house to automated blinds with many features for about $35-40. What my blinds do (aka what sensors does it have). Open when it’s day light, and close when the sun goes down. I am operating the blinds using a servo, which is a type of geared electric motor. Perma Link: More Videos Below… Like this: DIY Z-wave blinds project. All,Long time lurker, first time poster. 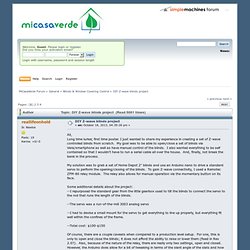 I just wanted to share my experience in creating a set of Z-wave controlled blinds from scratch. My goal was to be able to open/close a set of blinds via Vera/smartphone as well as have manual control of the blinds. I also wanted everything to be self contained so that I wouldn't have to run a serial cable all over the house. And, finally, not break the bank in the process. My solution was to grab a set of Home Depot 2" blinds and use an Arduino nano to drive a standard servo to perform the opening/closing of the blinds. Arduino Sensor Plugin. Controlling Blinds.com RF Dooya Motors with Arduino and Vera. Arduino Sensor Plugin. Home Automation - upload-17387506-e377-47f3-b11c-4674aeac6d0a.pdf. Adafruit Motor Shield V2 for Arduino. Adafruit Motor Shield V2 for Arduino.