A hard act to Swallow. About Me Steve Wheeler I'm Associate Professor of learning technology in the Plymouth Institute of Education at Plymouth University. 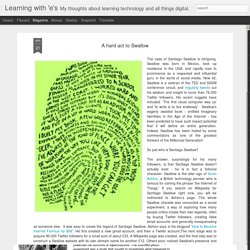 I chair the Professional Enhanced Learning Conference (Pelecon), and I serve on the editorial boards of a dozen international journals, including the open access publications Research in Learning Technology (formerly ALT-J), Digital Culture and Education, EURODL and IRRODL. I'm a Fellow of the European Distance and E-learning Network (EDEN) and a member of EDEN's NAP steering group. My research interests include learning technology, cybercultures, creativity and social media. 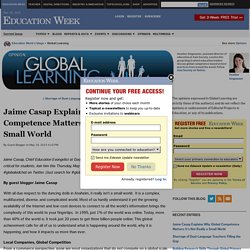 Join him this Thursday, May 21st at 8pm ET/5pm PT for a special #globaledchat on Twitter. (Just search for #globaledchat to join the conversation). The invention of tradition: how ‘researchers’ replaced teachers. The word “traditional” is possibly the most overused term in higher education. 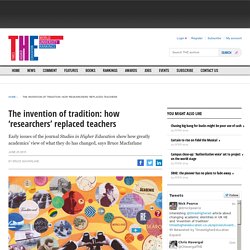 In fact, in common with nearly all institutions that have endured for any substantial length of time, the university has been adroit at reinventing itself. The latest reimagining is that “traditional” universities are research-led institutions. This myth has comparatively recent roots. An insight into just how much priorities have changed among academics during the recent past is provided by The British Academics, A. H. As the Society for Research into Higher Education celebrates its 50th anniversary this week, I have been looking back at early issues of Studies in Higher Education, the journal of the SRHE, first published in 1976.

Building social engagement at your college or university. Last week we opened our call to find 50 of the most influential HE professionals on social media in the UK. 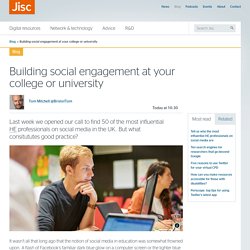 But what consitututes good practice? It wasn’t all that long ago that the notion of social media in education was somewhat frowned upon. A flash of Facebook’s familiar dark blue glow on a computer screen or the lighter blue of Twitter would immediately let off warning signs that attention wasn’t on the job at hand – far be it that these channels could actually be useful in the professional environment.

Thankfully, most colleges and universities today recognise the huge potential of social media for sharing key messages, outputs and directing people to your content. For example, it’s highly likely that your organisation has a primary Twitter account that’s designed to represent the organisation as a whole. But confining your organisation’s social media activity at the corporate level does miss out those people who are likely your biggest advocates: your staff. 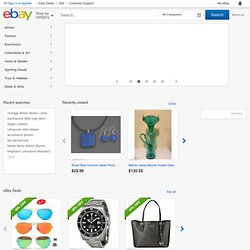 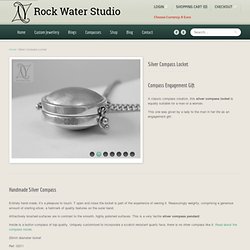 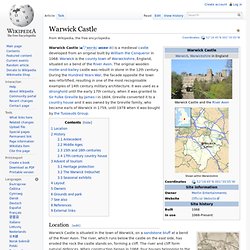 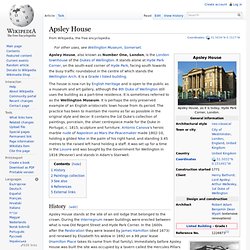 How sports science is changing the way the London Marathon is run. Poor old Pheidippides.

The original marathon man ran from the battlefield of Marathon to Athens and died from his exertions. If only he'd had the right gear. Tragically, compression tights made of supportive memory fabric with state-of-the-art temperature management and engineered gradient systems that enhance the blood flow and reduce lactic acid buildup were not available in 490BC.

Nor was a GPS watch connected wirelessly to a heart-rate monitor and a satellite system supplying data to an analytical website tracking everything from gradient to wind speed. Nor were carbohydrate gels, whey protein shakes, caffeine blocks or beetroot shots. Royal Armouries Museum. Royal Armouries Museum, Leeds: Looking up the main stairwell in the Hall of Steel The Royal Armouries Museum in Leeds, West Yorkshire, England, is a national museum which displays the National Collection of Arms and Armour. 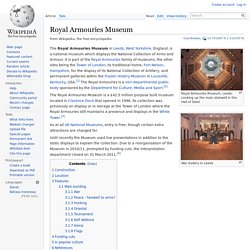 It is part of the Royal Armouries family of museums, the other sites being the Tower of London, its traditional home, Fort Nelson, Hampshire, for the display of its National Collection of Artillery, and permanent galleries within the Frazier History Museum in Louisville, Kentucky, USA.[1] The Royal Armouries is a non-departmental public body sponsored by the Department for Culture, Media and Sport.[2] As at all UK National Museums, entry is free, though certain extra attractions are charged for.

Until recently the Museum used live presentations in addition to the static displays to explain the collection. Due to a reorganisation of the Museum in 2010/11, prompted by funding cuts, the interpretation department closed on 31 March 2011.[4] Construction[edit] Location[edit] Blenheim place Oxfordshire. Stowe house. Harlaxton manor. Imperial War Museum. Imperial War Museums (IWM) is a British national museum organisation with branches at five locations in England, three of which are in London.

Founded as the Imperial War Museum in 1917, the museum was intended to record the civil and military war effort and sacrifice of Britain and its Empire during the First World War. The museum's remit has since expanded to include all conflicts in which British or Commonwealth forces have been involved since 1914. As of 2012, the museum aims 'to provide for, and to encourage, the study and understanding of the history of modern war and "wartime experience"'.[2] The museum's collections include archives of personal and official documents, photographs, film and video material, and oral history recordings; an extensive library, a large art collection, and examples of military vehicles and aircraft, equipment and other artefacts.

History[edit] Stories of Edinburgh. Stories of Edinburgh. 10 of London's Best Kept Secrets  By College Tourist; Author: Samantha McIsaac, University of Massachusetts Dartmouth Take a look behind the scenes of London with these city tips. If you find yourself traveling through Europe, you'll have to stop by London for some crumpets and tea!